Whatever you do, don’t rush the onions.
I’ll be the first one to admit that I rarely follow recipe directions to the letter, so I’m warning you: don’t rush the onions. When onions are cooked slowly they do a magical thing, or rather scientific — they are transformed from stinky and crunchy into irresistibly sweet and jammy. Although caramelizing onions is quite simple, it takes a while. Dare I say, it requires patience; a virtue I often find myself lacking, but I’ll put in the time for onions. 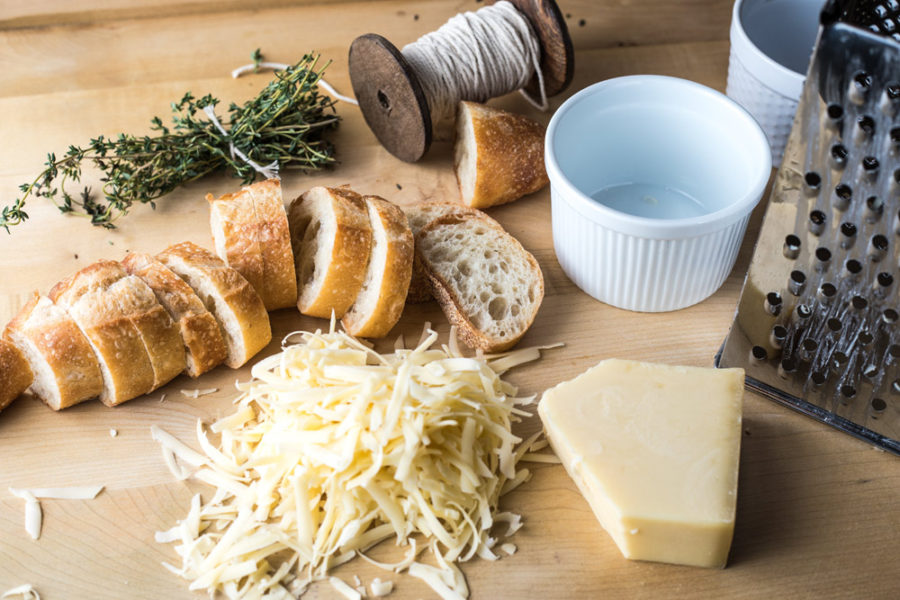 Now is the time to make this iconic soup when all you want to do is stay indoors. While melting Comté on top is the tradition, I used Gruyere for the same meltiness but a little more “meatiness”. So open a bottle of Mary Taylor Bordeaux Blanc and pour yourself a glass, then consider the origin story of French Onion soup while you caramelize those onions. 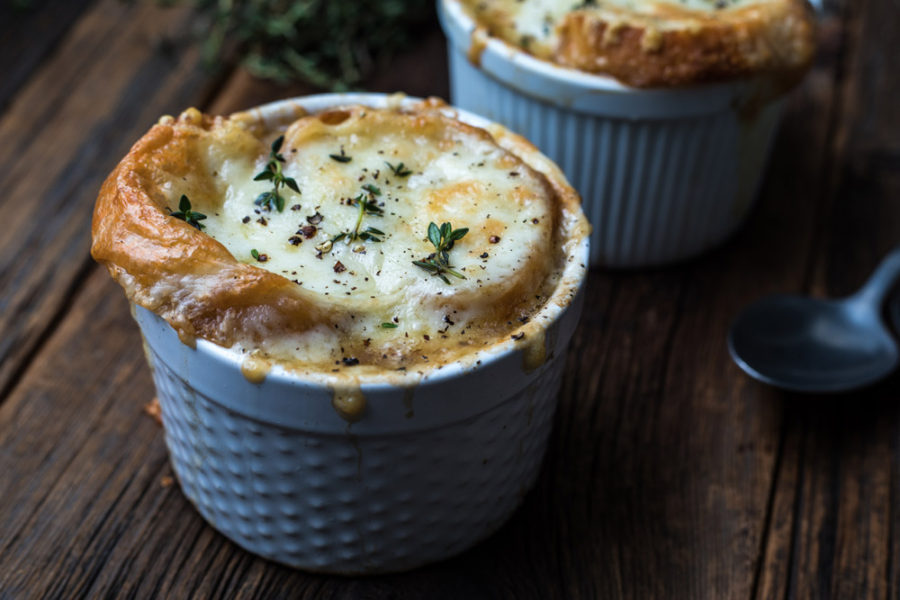 We can broadly credit the Romans for what Americans now commonly call ‘French Onion Soup’. The appeal 8,000 years ago still holds true today: This is a dish that requires relatively little ingredients in return for for something quite flavorful and mildly nutritious. The recipe didn’t get its French twist until the 18th century. As with many food histories it’s unclear exactly who can be credited for its creation, but it’s rumored that King Louis XV returned to his hunting lodge one evening and all the cupboards were bare; nothing but onions, butter and champagne, oh dear! This basic version of onion soup in beef broth was served in the great Parisian open market, Les Halles. Although it wasn’t until surrounding restaurants started adding the broiled Comté on top to transform it into Gratinée des Halles, or the French Onion Soup we know today. From there, the soup was served to all walks of life that frequented the market, enjoyed by every class. Its popularity knew no limits and can still be found on most menus today.

This classic preparation gained popularity in America during the 1960’s along with the interest in French culture and surely with the release of Julia Childs’, Mastering the Art of French Cooking. My grandmother must have been one of those swept up in French cuisine because I can recall my first experience with the soup at her house. As former restaurateurs, my grandparents were equipped with the classic lions head bowl*. It arrived in front of me alive and bubbling, practically oozing with cheese over the sides. This was the most exciting soup I had yet laid my eyes on. It’s easy to understand how it became the ultimate comfort food/hangover cure for an entire nation.

*Note: I personally don’t own fancy lion head bowls, but any oven-safe ramekin will work. In fact, even if you don’t have any ramekins at all, fret not! You can have your soup and eat it too. Just place the baguette slices on a baking sheet and cover with grated cheese. Use a broiler to melt the cheese until bubbly, just a few minutes. Place the melty cheese toasts in a bowl the soup. 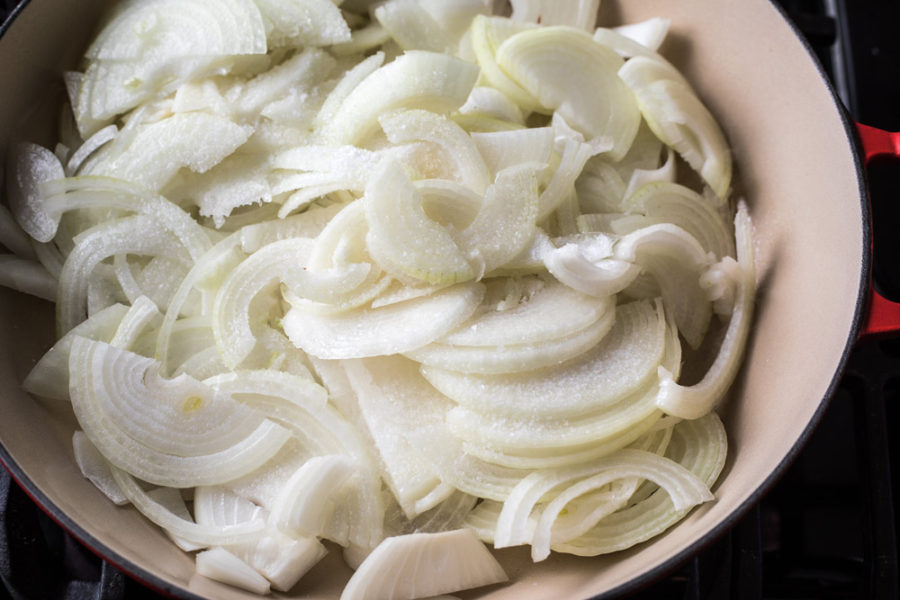 Add the butter, onions, shallots, and garlic to a heavy bottomed pot. Begin to sauté on low heat.

Allow the onions to cook undisturbed for as long as possible without burning and sticking to the pan. In other words stir infrequently, but keep an eye on them! I told you, patience is crucial. Add more butter or a little water if it seems like they’re sticking often. Cook until they’re soft, translucent, and a rich brown color – about an hour. 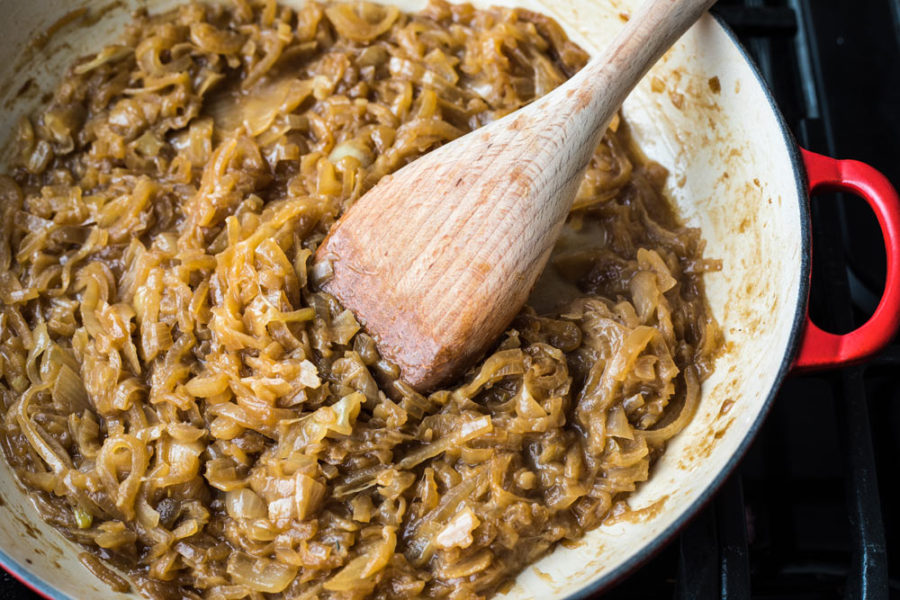 Deglaze the onions with white wine. Allow the wine to cook off.

Preheat the oven to 450 degrees F.

Add the beef stock and tied bouquet of thyme. Turn up the heat to bring to a boil. Then allow the soup to simmer and reduce to thicken. Season to taste with salt and black pepper. 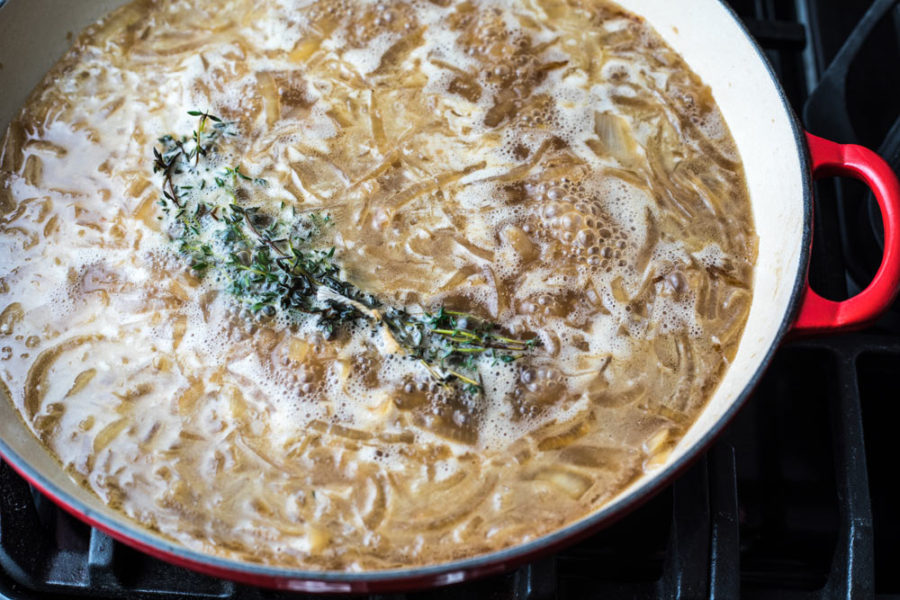 Note** At this point the soup could be brought to room temperature and refrigerated for a day or two before served.

Ladle the soup into the ramekins arranged on a baking sheet. Fill them up almost to the top! This will ensure literal overthetop bubbly, cheesy meltiness. 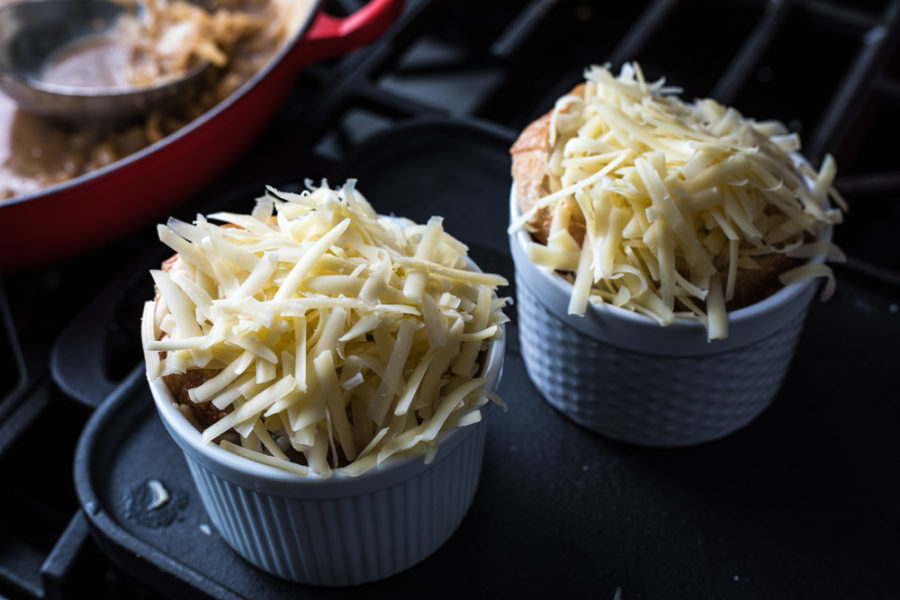 Add the baguette slice on top and cover with grated cheese.

Bake for about 10 minutes, or until the cheese is lightly browned and bubbling. 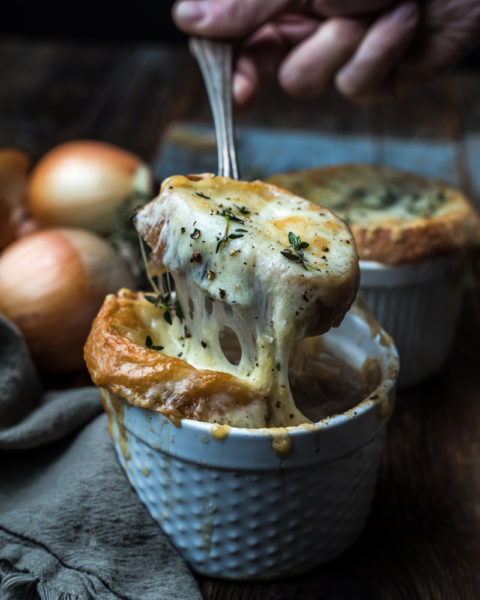 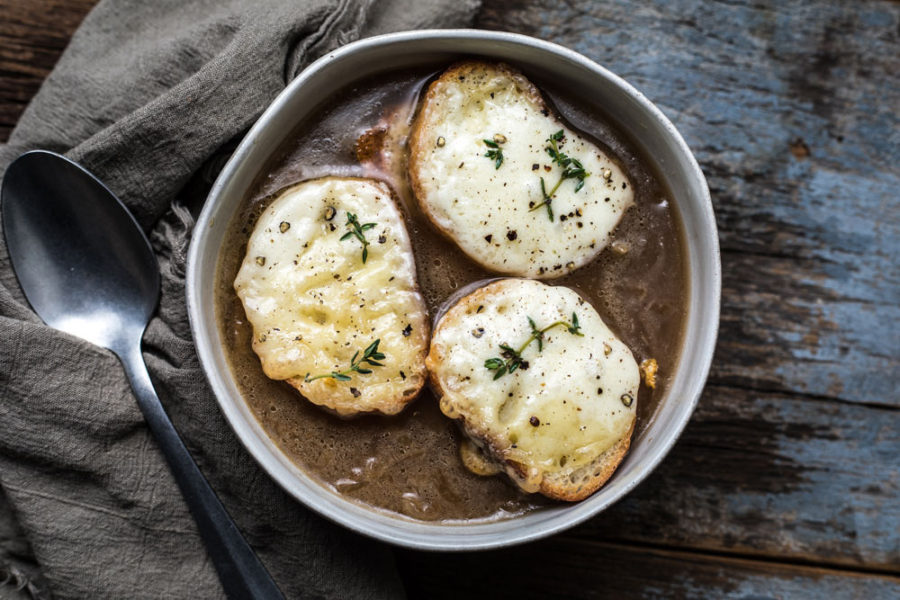 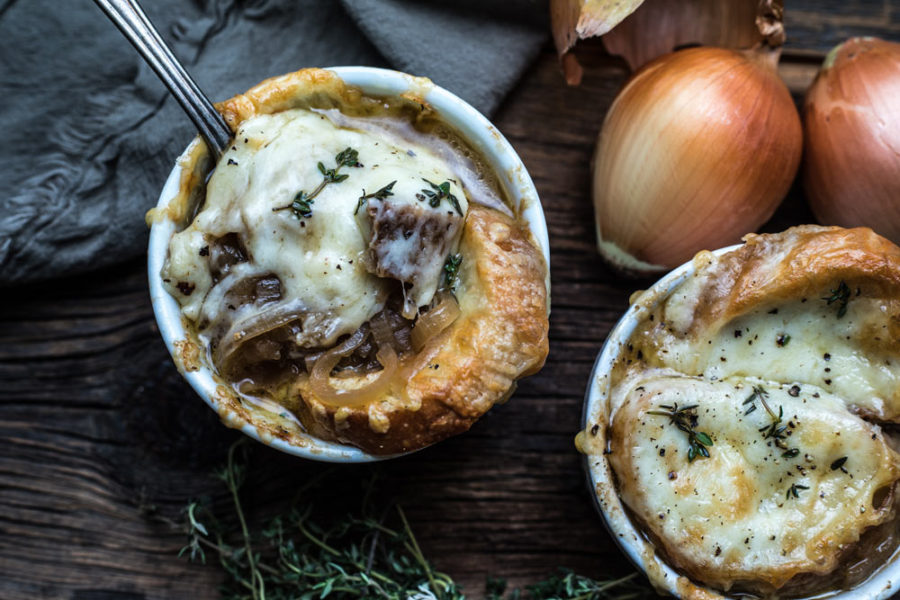 Can’t wait to make it. Do you have approx weight or volume for 3 large onions? Thanks.

This is THE BEST French Onion Soup I have ever tasted!!! Brilliant recipe!!! I used Kitchen Basic beef stock, BTW, and the soup was truly amazing. Better than what I have had in Paris! Or at any restaurant in the U.S.!!! Thank you for posting this excellent recipe.

I love french onion soup!!!!!!!!😍😍😍 And when someone make it wrong I I have to send it back. I made a couple of and every time it comes out different. But yours look real tasty.