Chocolate as a Path to Preserving the Rainforest

What would you do to help preserve the rainforest? Would you sell all your earthly possessions, buy a plot of land in South America, and set up a nature reserve? Would you spend your weekends lobbying politicians to draft green bills? Would you eat one of the world’s most luxurious bars of chocolate? Conservationist Jerry Toth is hoping you’ll at least consider option three.

There’s a new luxury chocolate on the market, born from a rainforest conservation project in Ecuador. It’s made from the rarest variety of cacao on earth, Ecuadorian Cacao Nacional, which until 2009 was thought to be extinct. But the To’ak story is about more than tasty chocolate. To’ak is the story of conservation and rejuvenation, embodied in the celebration of the ultimate chocolate experience. 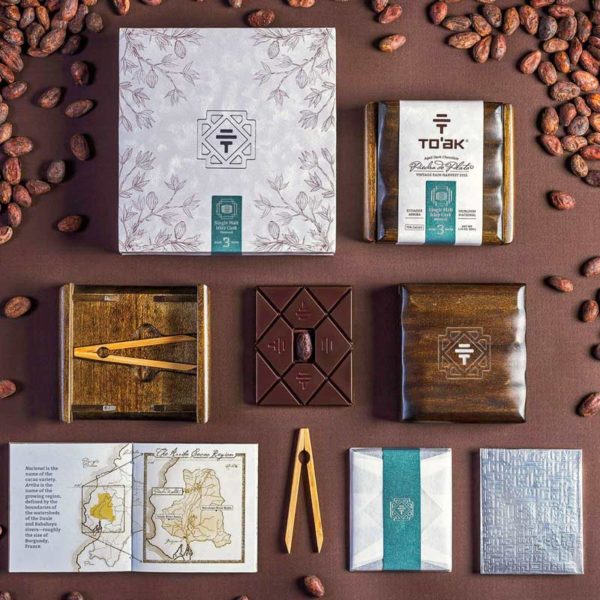 In 2007, Jerry Toth purchased 1,400 acres of land in Piedra de Plata (“Silver Stone”), Ecuador. The land is amongst the 2% of the remaining Ecuadorian rainforest, and was thought to be the epicenter of a long-extinct species of chocolate. According to carbon dating and archaeological studies, Cacao Nacional dates back at least 5,300 years, to the first recorded cacao trees harvested by humanity. During the 1800’s, it was the most coveted variety of cacao in the world, at one time trading at a value higher than gold. Unfortunately, in 1916, a botanical blight called Witches Broom eradicated the crops, and for nearly a century pure Cacao Nacional was thought to be extinct.

Unsatisfied with conventional wisdom, Jerry and his team began genetically testing cacao trees across Ecuador. In 2009, they identified nine trees in the Piedra de Plata valley that were confirmed through genetic testing as pure Cacao Nacional. After creating a field guide to help narrow their search, they were able to identify 500 Nacional trees. It is from these trees that To’ak chocolate is produced. 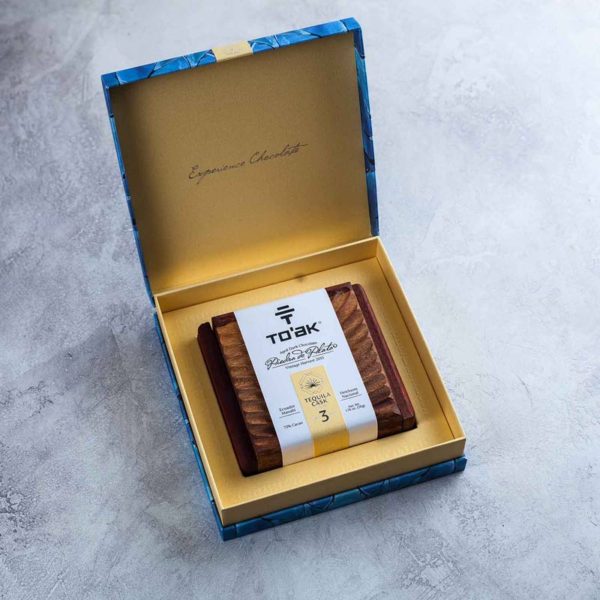 To’ak works with a coalition of local cacao growers and conservationists to protect and revitalize this revered cacao plant. They have harvested seeds from those initial 500 trees, and planted an additional 230, which will not begin to bear fruit for three years. To’ak refers to these trees as the Noah’s Ark of Ancient Cacao Nacional. Ecuadorian family farmers are paid directly, and are offered the highest price in the country. This ensures that the practices are sustainable, and To’ak is certified Fair Trade as a result.

“We would have loved to have enough cacao to build a sustainable structure by crafting $10 chocolate bars, but there simply isn’t enough chocolate to do that. So we endeavored to create the ultimate chocolate experience. This chocolate should be savored the way wine and whiskey connoisseurs savor the finest spirits.”

Due to the limited volume of cacao, and the pressing need for funds to support the conservation efforts, To’ak has developed “vintage” additions that elevate their chocolate to the heights of culinary achievement. Their chocolate is aged for three years in a variety of wood barrels from around the world, including Laphroaig Whisky, Tequila casks and Palo Santo. Each imparts unique complexities not otherwise found in chocolate flavor profiles. To’ak is the first and only tree-to-bar chocolate maker that comprehensively applies this principle to chocolate. It is the essence of what they do.

To further elevate the experience, the bars are packaged in boxes that can only be described as works of art. Within the outer box is a Spanish Elm wood box that is individually engraved with the bar number. That box includes tasting utensils, an illustrative booklet that tells the story of each flavor profile, and a separate booklet with the history of To’ak and Cacao Nacional.

This is chocolate like you’ve never experienced it before. And as you savor it – or as you gift it – you can feel a sense of pride that you are not only doing well, you are doing good. 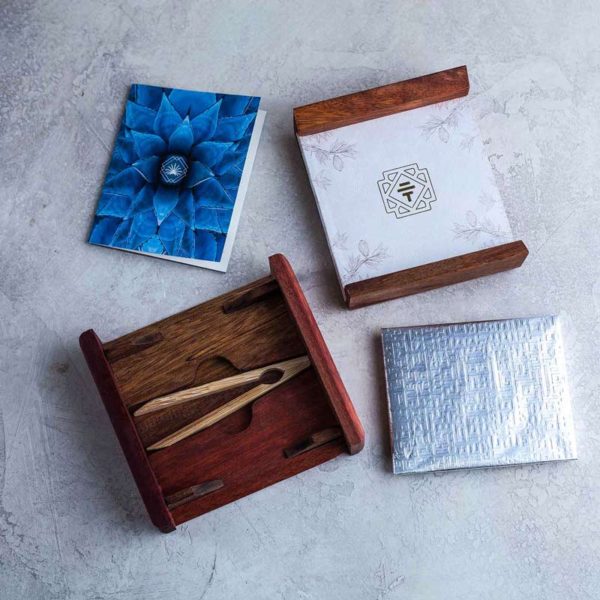 2) The box is emblazoned with iconography of the Valdivia culture, which inhabited the area from 3,500-1,500 BC.

3) The first batches of To’ak were produced by hand in a thatched bamboo house in the middle of the forest.

4) Each chocolate pairs beautifully with the spirit that serves as inspiration. Laphroaig cask chocolate? Pour a dram of Scotch with it.  For the Palo Santo, we’d suggest Dogfish Head’s Palo Santo Marron.

Who should you spoil with the ultimate chocolate experience?