Queue up the Downton Abbey marathon and break out the vintage china, be it fancy or thrifted. Today we’re exploring our favorite wintertime tea and cheese pairings, which can be enjoyed at whatever time of day that you’d like. We’re offering our suggestions broken by the different times of day for English tea, because why not. Now you’re learning about all of tea, all of the cheese and all of the teatime names. 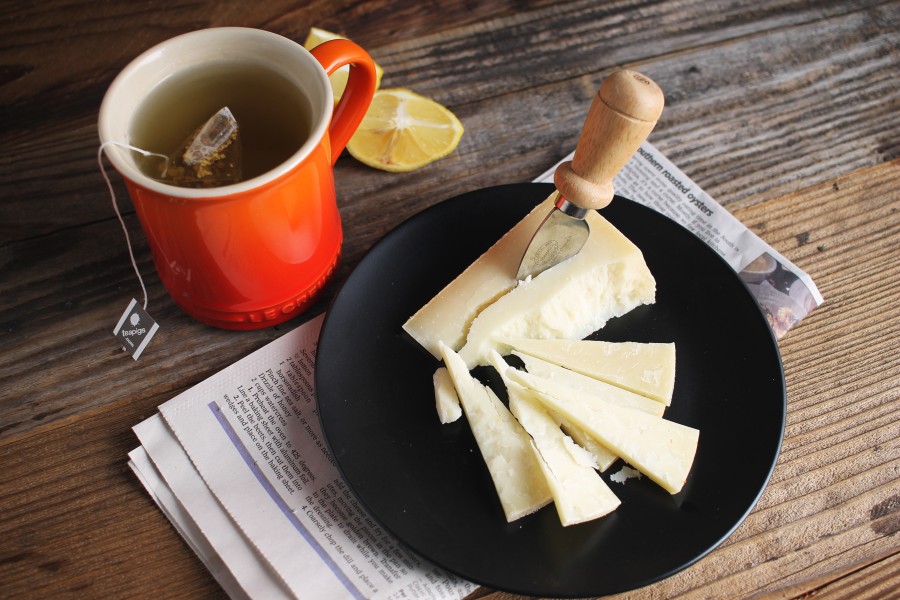 Goat’s milk cheeses are traditional as starter cheeses on a cheese plate, as they’re light in body and low in butterfat. You could sub in a traditional chèvre here, but for winter we’re digging the firmer, crunchy Pantaleo for a tea pairing selection. Hailing from Sardinia, which is usually known for its sheep’s milk cheeses, Pantaleo is a unique and rare goat’s milk cheese that also hails from the mysterious Italian island. Ivory in color with a thin, natural rind, Pantaleo has a mild herbaceous flavor with hints of lemon and lime in the finish.

White tea would be a good place to start in a sequential tea tasting, and if we were writing this in the summer, we’d be all about a white tea and chèvre or ricotta pairing. Instead for winter, we’re kicking off with a Sweet Ginger tea. “Everything good is found in ginger,” states an old Indian proverb, and we like that. It soothes the stomach and gets you ready for a lot of cheese eating.

Some of you may have recognized Elevenses as a LOTR reference, and it is. (It’s a hobbit’s third meal of the day.) It’s described as being like afternoon tea, but in the morning. For those of us who don’t reside in Middle Earth, this late-morning work break is a little less savory than brunch. It’s served at 11am, with coffee or tea. And now cheese! 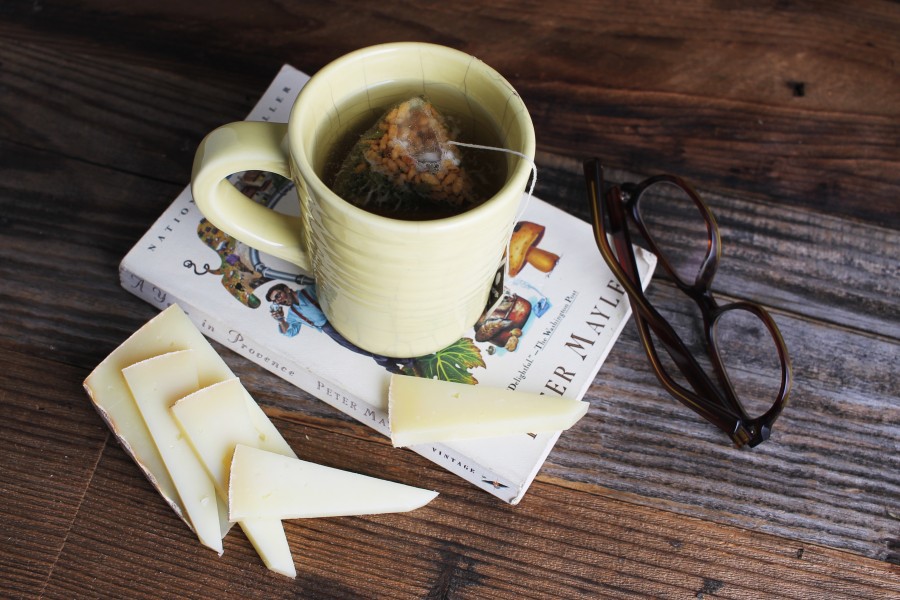 Break out the fancy-schmancy Lady Mary dress, replace the crustless sandwiches with pieces of cheese, and take a proper midday break.

Afternoon tea emerged as a social event sometime around the 1830s or 1840s, According to NPR/A Social History of Tea, the duchess of Bedford’s hunger pangs brought it to existence. Back then, lunch for the upper crust was a light meal served at noon, and dinner occurred no earlier than 7:30pm. Often midday, the duchess would feel hunger pangs and order tea and snacks to her bedroom chamber. The refreshments did the trick, and Russell made this tea break an ongoing habit. Friends of the duchess began joining her in this post-lunch tea ritual, as the story goes, and the practice spread in aristocratic circles. Nowadays, it’s offered at fancy hotels around the world, or just go ahead replicate at home or work for yourself.

Since our 3pm hunger pangs often translate to spontaneous chip and pretzel purchases (whose doesn’t?), we thought that afternoon tea was an appropriate time to enjoy a cup of teapigs Popcorn Tea with a wedge of Ardi Gasna cheese.

Ardi Gasna means sheep’s milk cheese in the Basque language. Ossau-Iraty and Abbaye de Belloc are similar cheeses from the same Pyrenees region, but the recipe for Ardi Gasna is not protected by law as the other two cheeses are, meaning that Ardi Gasna comes from a neighboring valley and the wheels are typically smaller, which affects how they mature. Made with raw milk, the 3-kilo wheels (roughly 6 1/2 pounds) are frequently rubbed with salt as they age, which seasons them throughout and encourages the rind to develop. Overall, the cheese has a firm texture with bright, rich flavors of sheep’s milk and hay. Since sheep’s milk is the highest in natural butterfat out of all of the primary milks used to make cheese, a cheese made from sheep’s milk will always naturally be buttery in flavor and texture. (That’s a very, very good thing.) And since who doensn’t love buttered popcorn…

According to teapigs, Popcorn tea was born from humble beginnings – Japanese peasants would sometimes mix green tea with toasted rice to make the tea that they had stretch further. It is now celebrated in its own right as Genmaicha tea, or Popcorn tea. They describe the flavor as “sugar puffs in a cup” – a truly unique blend with an almost nutty undertone. 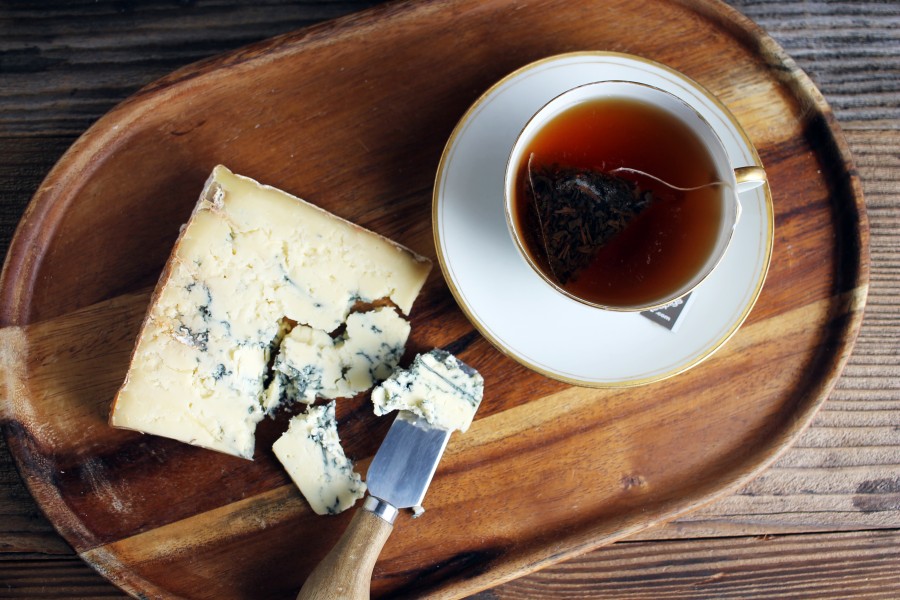 A funny thing about High Tea – despite the name, high tea actually originated with the lower classes. In the 1800s, many lower class working folk weren’t offered the luxury of an afternoon lunch break (shudder), so they took tea right after work with heavier foods — think meats and cheeses— to sate their hunger. Psst! Good to know: Using the term “high tea” when you really mean “afternoon tea” is a dead giveaway you’re American when you’re traveling in London. Avoid this faux pas if you’re ever abroad.

Out of all of the tea and cheese pairings laid out here, the combination of Colston Bassett Stilton and teapigs Chocolate Flake Tea is the “heaviest,” so let’s call it dinner. Or dessert. Is there anything wrong with dessert for dinner? Nah.

Heavy isn’t even the appropriate word, as this pairing is magically airy and delicious. Colston-Bassett Dairy has been making Stilton, one of our all-time favorite blues, the old-fashioned way since the early 20th-century. They source their milk from only five neighboring farms and that attention to detail and quality shows through in the finished product. This blue is formidable, there’s no denying that. But the strength of the penicillium roqueforti doesn’t overpower flavors of lush, grassy milk, and the creamy paste is as well developed as a proper layer cake. It’s creamy, crumbly and fudgy, but retains a creamy texture that practically dissolves on the tongue in every little bite.

So, chocolate tea. Was this just dreamed up as a low-to-no calorie option for all of our human chocolate whims? Surprise, it’s not, though that is a nice benefit. It’as an old world South American drink. Long ago, deep in the jungles of Central America, cacao was being used by the Mayans, Olmecs, and Aztecs as a ritualistic and indulgent beverage. A cold, foamy mixture of cacao paste and water was coveted and revered while the actual beans were so precious they were used as money. This concoction was seen as possessing aphrodisiac and revitalizing powers.

Most chocolate and cocoa teas are made today by mixing roasted and winnowed cacao shells with regular black tea. The cacao shells infuse the brewed tea with chocolate-y flavor, and just happens to conveniently leave it without the calories of regular cocoa. Wahoo!

Chocolate and blue cheese is already a perfect pairing, and happily, chocolate tea and Stilton keep up this match made in cheese pairing heaven.

Before Bed Tea (We Made This One Up…) 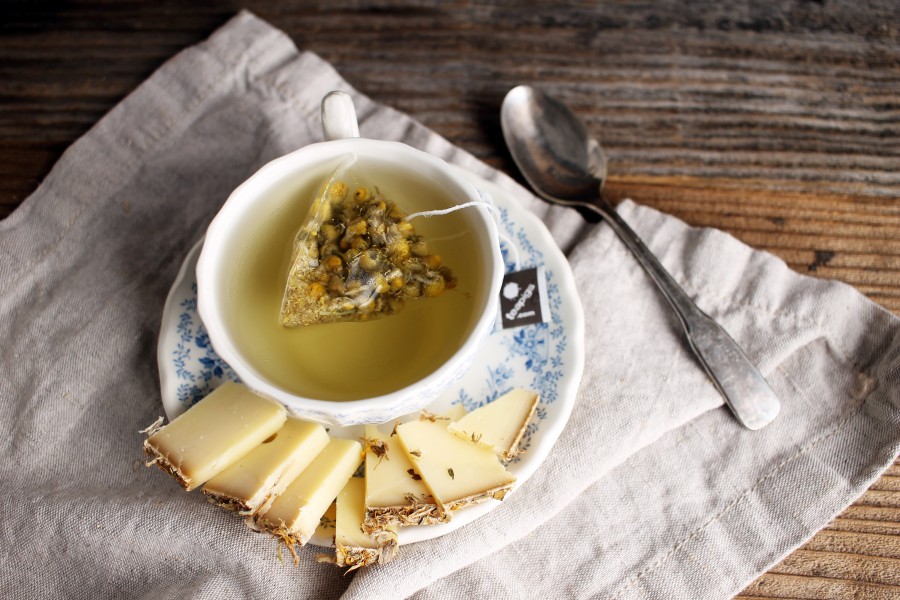 You must be exhausted from all of these tea times and cheese samplings. So, let us put you to bed with just one more tea and just one more cheese.

Chamomile, meaning ‘ground apple,’ has been sipped for centuries in the Roman Empire, during Egyptian rule, and in ancient Greece. Besides all sorts of other health benefits, (soothes muscle aches! fights cancer! naturally prevents hehmerroids!) drinking chamomile tea soothes the nervous system so that you can sleep better. It’s been used as a solution for insomnia for centuries.

A flowery tea deserves a flowery cheese. Enter Alp Blossom. Herbs and flowers from the Austrian Alps grace the rind on this Appenzeller-like savory, dense, and wonderfully melty broth bomb of a cheese. Brown butter notes from the cheese will be accentuated by the floral notes of the tea, and it’ll almost feel like you are eating the rind, even though you aren’t. Once you fall in love with this pairing, make sure to set a reminder to pick it up for Mother’s Day gifting…along with a bottle of dry white wine, if mom’s into that.

All of these cheeses and all of the teapigs teas can be found in Di Bruno Bros. stores. This was not a sponsored post – we just realy love teapigs! Most of the items in this post can be found on our website at www.dibruno.com. Leave us a note in the comments if you’re looking for anything and can’t find it!