Let’s set the scene. You’re in a cabin somewhere in Maine, upstate New York, or Canada. The temperature is cold outside, because it’s winter, and the wind is blowing loudly and whipping against the windows. (Really appreciating insulation right now.) It might be 4:55pm, or maybe it’s 11pm. Heck, maybe it’s 6am and you just happen to be awake. It’s pitch black outside, which would be the case for any of these times of day. Maybe you’re wearing a knit hat, even though you’re indoors. A flannel shirt seems likely, with perhaps a golden retriever or hound dog at your feet. A fireplace with a crackling fire would rounds the whole thing out, and a blanket knit by someone’s great aunt.

What would you be eating if this fantasy were real? Are you like us where all of your fantasies have as detailed of food items as the rest of the scenario? Great.

Meet Dad’s Hat Small Batch Whiskey Barrel Aged Maple Syrup, which is a real thing, not just fantasy. Or perhaps it’s the stuff that dreams are made of? Whatever you’d like to call it, it’s a locally-produced maple syrup that;s been aged in Dad’s Hat Rye whiskey until it reaches the perfect state of delicious sweet whiskey-tinged maple flavor. In our deepest cabin fantasies, this syrup is the breakout star.

Produced in collaboration with Keystone Homebrew, the base maple syrup comes from Somerset County, Pennsylvania, and is 100 percent all natural maple syrup. The staff at Keystone sourced the syrup and then added it to the rye barrels for 3-4 months of aging before bottling it. The resulting syrup is viscous – as syrup should be- with a bit of bite and charred vanilla undertones.

Alas, we’re not in a cabin somewhere. But we’re in Philadelphia, where the weather does get cold, and the appreciation for cool local products is strong. So let’s have some fun. We’re carrying this whiskey-tinged syrup for the entirety of January. Buy it now, and cook yourself happy with it all winter long. Below are some ideas of different foods that we jazzed up with this whiskey syrup.

Remember, winter finds no solace in fruit. Slather on the syrup. Slather it proud.

Use it as a cheese accompaniment. 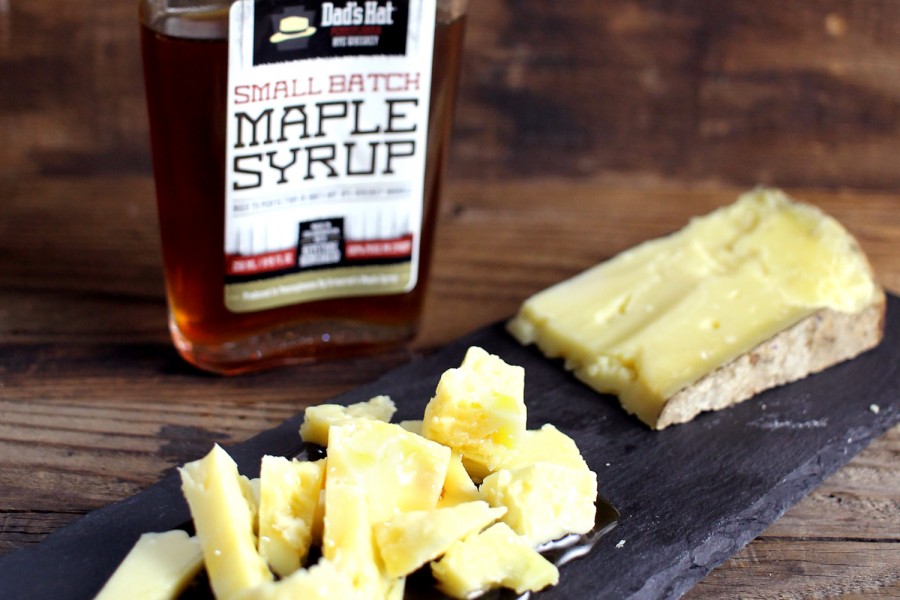 This is the House of Cheese. Are we allowed to start anywhere else? We’re big fans of this syrup with paired with a hearty, meaty Alpine style cheese. Here you see it paired with Wrångebäck, the oldest registered cheese in Sweden. (Since 1889!) Aged between 18 and 30 months, this lightly-washed firm cheese has a tangy, grassy-milky scent and complex umami flavor. The bite of the cheese is well-tempered by the sweetness of maple, while the natural meaty/beefy flavors can stand up to a little punch of whiskey. This is one of the ultimate winter cheese pairings.

Is boozy syrup not enough booze for you? This pairing can stand up to an actual glass of rye, if you’d like. If that sounds like a little too much whiskey for one tasting, go for a tannin-heavy red wine (Cabernet, Cahors or Syrah/Shiraz come to mind) or a dark Porter or Stout beer. Big pairings call for big beverages.

Whiskey Syrup for Breakfast: Steel cut oats with a splash of whiskey syrup. 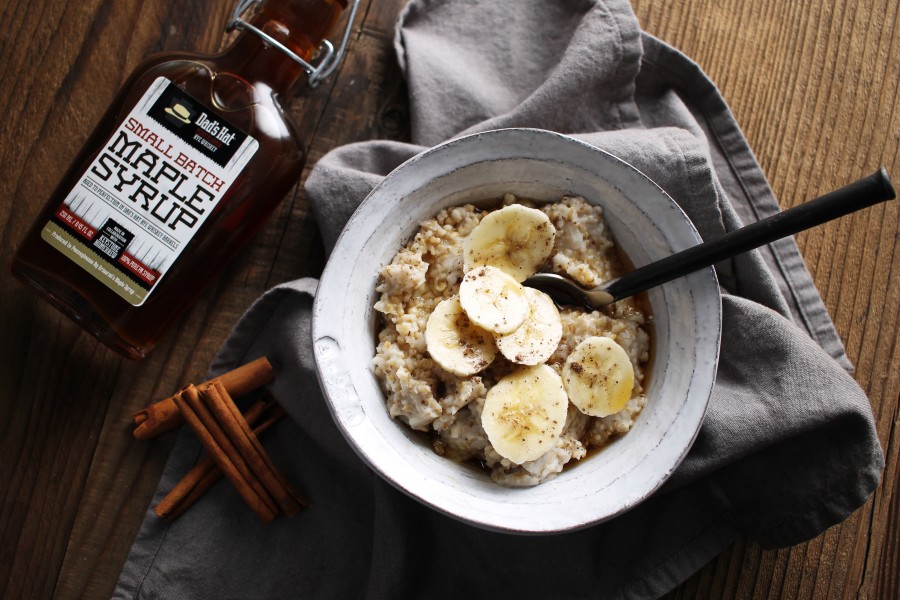 Here’s the only acceptable way to have whiskey for breakfast and still be able to go to work afterwords. Pour some of this syrup onto your unflavored steel cut oats. This could be a good addition to instant oatmeal as well – pending the flavor – but we personally like the heartiness and texture of proper slow-cooked steel cut oats. Add some fruit and call it healthy – there’s plenty of fiber and other good stuff there to balance out the sweet addition of some whiskey syrup.

You know what the perfect beverage pairing for this oatmeal is? Coffee. Which brings us to…

[More] Whiskey Syrup for Breakfast: Add it to your coffee instead of sugar. 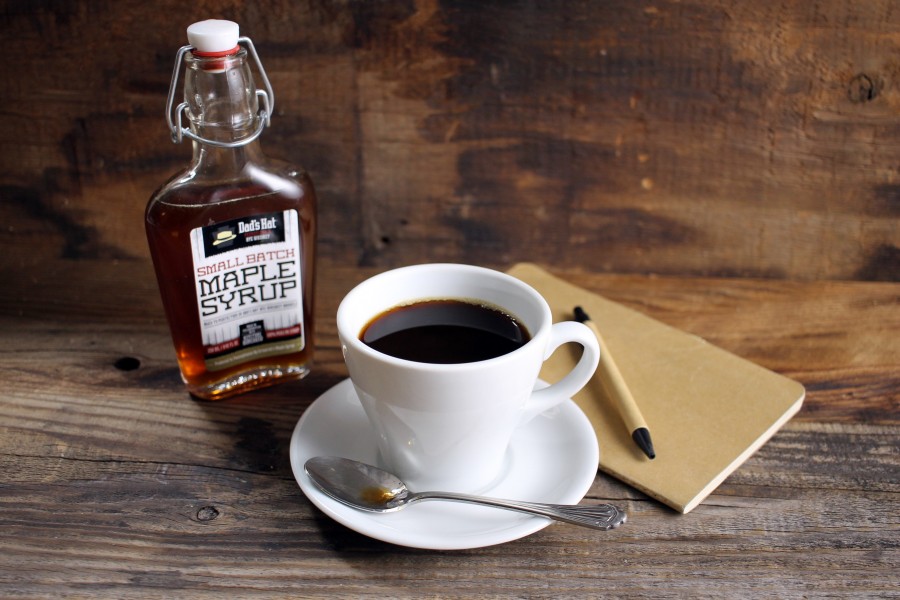 Again, we’re just trying to give you socially acceptable ways to have a little whiskey flavor in your early morning, but still be able to function like a proper person for the rest of the day. It’s just a flavor. We like it too.

Maple syrup in coffee is already a sweetening alternative used by some people that we’ve seen around and on the internet. Just take that up a notch. 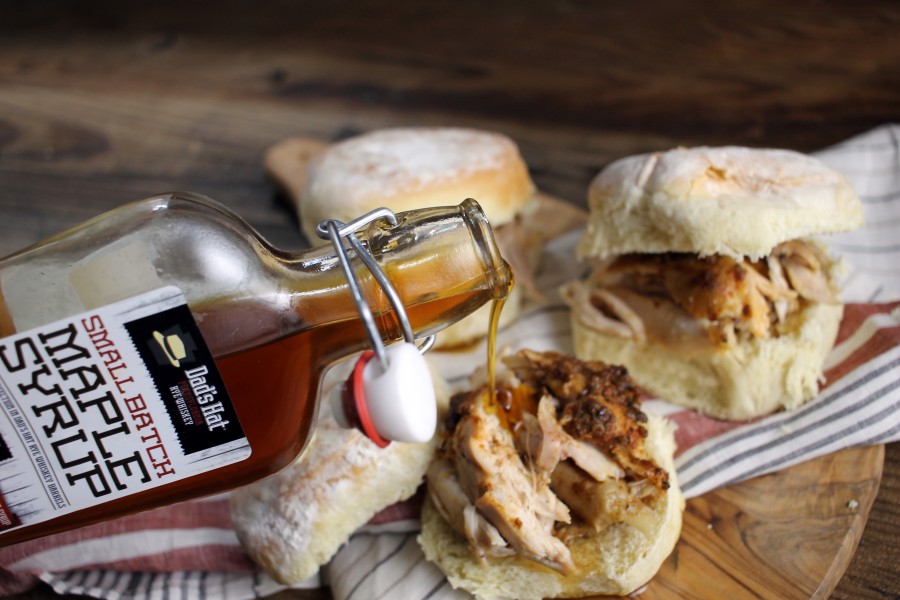 The inspiration here is the already-perfect fried chicken and waffles combination. And if something is already perfect, do you need to muck with it?

You can, because this would be a perfect addition to that dish. Or get creative. Buy a rotisserie chicken, or roast your own chicken. You could brine the chicken in this syrup, if you wanted to. Maple and lemon as a brine is already a thing that people love. Whiskey maple could be all the better…Pick the meat from the chicken to your desired texture, either small pieces or larger ones. Layer the chicken pieces on a toasted, buttered roll – we used a Di Bruno snowflake roll (basically a biscuit) for this photo.

Drizzle your desired amount of whiskey syrup on top. We think that the right amount is just enough to end up with some on your hands, but not quite enough to spill all of your pants. That said, do have a napkin handy when eating this delicious sandwich. 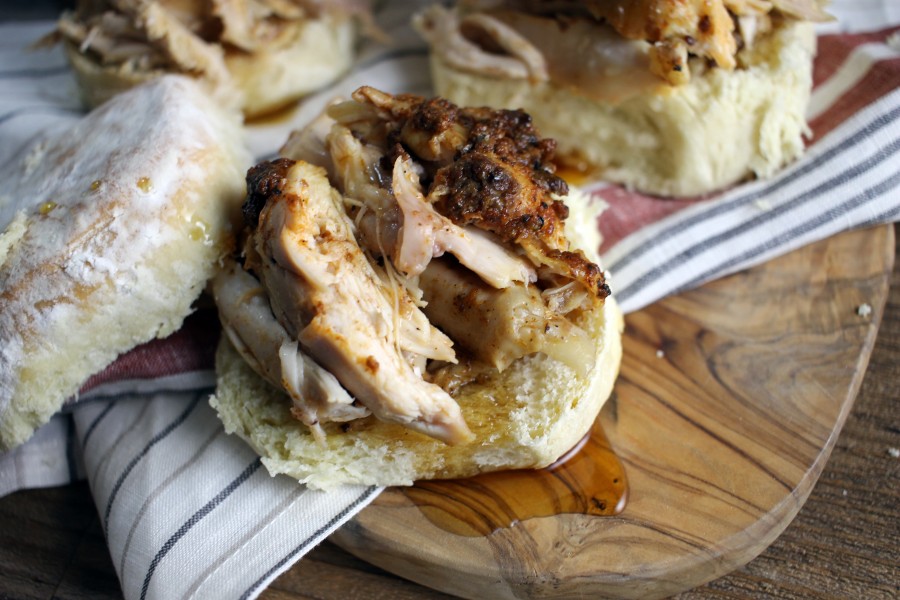