and yes, it does look like a lunar crater…

Words by Scott Case, Procurement Manager. This was written on Monday, November 14th, the day after the truffle was purchased.

Yesterday afternoon, Hunter Fike, Di Bruno Bros. Merchandising Manager and local cheese hero, got into a bidding war over a beautiful knobby white truffle, fresh from Alba, Italy. While Hunter is a fun guy, it was evident that he was not accustomed to throwing thousands of dollars around on funghi. As he grew sweatier, his color a little paler (think aged provolone-white), his colleagues at Di Bruno Bros egged him on, assuring him that he had the green light to continue to bid. The bidding started at $1,000 and quickly escalated into the thousands. In a quiet moment, as the bids grew larger and larger, the auctioneer called out to Hunter, who was looking to us for guidance: “Don’t look at them, look at me!” Hunter raised his finger in the air…”another thousand to the man with the floppy brow!” 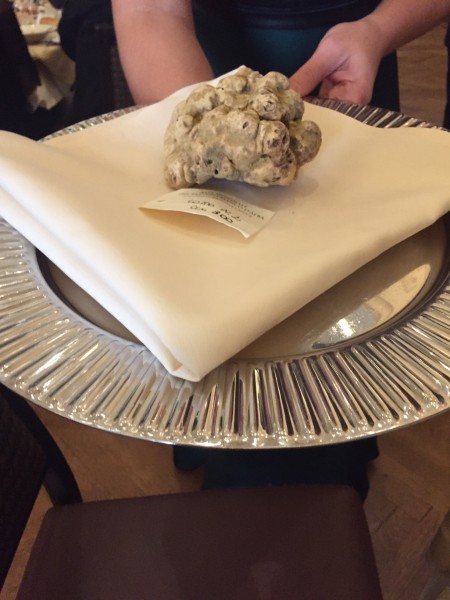 What’s all the fuss about? Fresh white truffles from Alba are the perfect combination of intoxicating aromas, short growing seasons and secret sources—they’re as scarce as they are delicious. As we enter prime truffle season, these exotic tubers are extracted from the forests around Alba, Piemonte. The prime locations of truffle-bearing trees are often a deeply protected secret. Truffle hunters and their well-trained dogs hunt for the prize of the perfect white truffle, which can fetch anywhere between $3,000 to $5,000 per pound at market. Generally, Alba white truffles are 1-2 ounces, but occasionally the truffle hunter finds a larger morsel, which ends up at auction. Truffles, with all of their romantic aromatics, add earthy, woodsy and meaty aromas to food and are best served as simply as possible. One paper-thin slice goes a long way…

Attending a World Alba White Truffle Charity Auction is an exhilarating affair and, for most, a once-in-a-lifetime event. Hosted by the National Italian American Foundation at the Union League of Philadelphia, the auction was attended by some of the finest restaurateurs in Philadelphia, as well as several hundred amateur gourmands, in addition to being simulcast with live bidding taking place in Italy. Chef Martin Hamman of the Union League prepared three courses featuring the ingredient of honor, including homemade campanelle pasta with Parmigiano and white truffle, filet mignon with asparagus, celery root puree and shaved white truffle and finally, a white chocolate and truffle semifreddo. All of the courses were paired with wines of the Piemonte region—Barbaresco, Barolo and Moscato d’Asti. 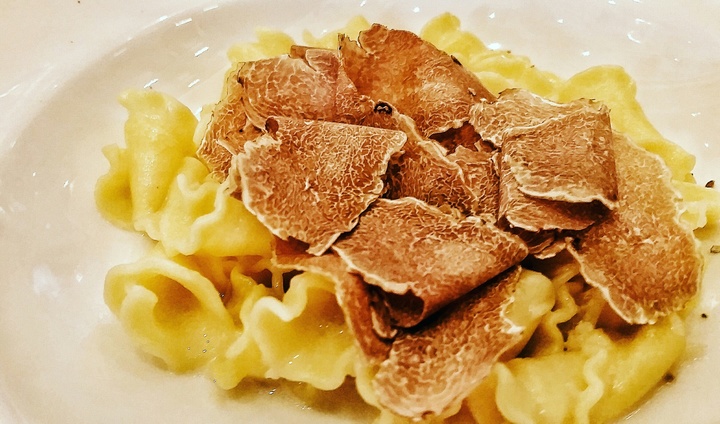 The fine food kicked off flurries of fun and nerve-racking rounds of bidding, led by Samuel Freeman III of Freeman’s Auction House. Each lot featured a pristine white truffle, paired with two wines from in and around Alba. At this year’s auction, the largest truffle, weighing in at 1 kg, went for $110,000. Smaller lot in the more-manageable four-figure range (including the one that Hunter would eventually win—a not-too-shabby 300 grams) touched off a competitive nature in the crowd. Alliances were formed, and at one point, a group of NIAF mainstays valiantly bid to try to bring the largest truffle in the world to Philadelphia, only to be defeated at the last minute by a six-figure bid and some minor technical difficulties with the Italian live-feed.

So what now? Hunter Fike, nascent truffle bidder, brought home a gorgeous prize for Di Bruno Bros. Chef Patterson Watkins, the executive chef of Di Bruno Bros., was salivating at the end of the auction, daydreaming about the different ways that it could be used throughout the upcoming Di Bruno Bros. Truffle Fest. (Haven’t heard? There’s a truffle-centric celebration coming to all stores this December, featuring everything from truffle-studded cheeses to actual truffles themselves. Stay tuned for more well-scented details.)  We’ll be offering this truffle in our case so that our customers can enjoy by the hunk, and will be cooking up some in-store events and samplings to spread the truffle love!