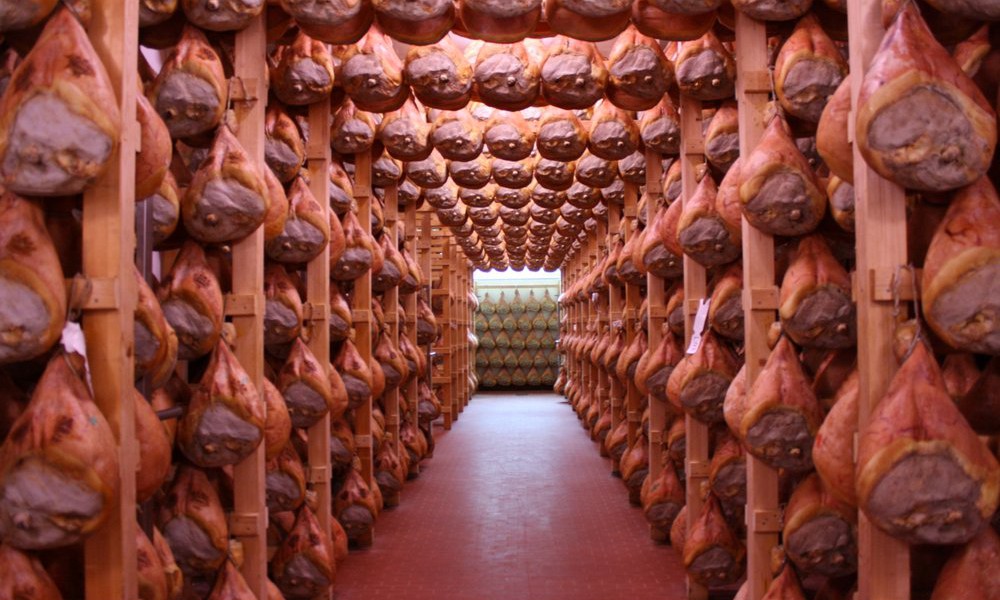 For having only two ingredients, prosciutto and other cured hams spark immense passion, and the seeming conviction that each one is better than the last. The most fundamental rule is this: prosciutto, speck, and jamon all start out as the exact same cut of meat (specifically, the hind leg) which is trimmed, salted, hung, and allowed to air dry for several months. All of the differences in flavor, texture, color, and marbling in the hams to follow come down to technique, climate, hog breeding, and the duration of the aging process. Originally, the technique of salt-curing and air-drying pork was one of necessity, a method to preserve meat from pigs slaughtered in late-autumn into the new year. Now, modernized versions of these traditional, rustic methods are closely guarded techniques yielding highly-prized gourmet products. Italian prosciutto, speck, and Spanish jamon are each protected in the EU with DOP status (Denominazione d’Origine Protetta) meaning that they’re highly regulated products. In order for a ham to bear the crown-shaped seal of Prosciutto di Parma, for example,  it must be produced using pigs of specific breeding, sourced from particular geographical areas, and in accordance with agreed upon regulations for aging time and conditions. If you find yourself overwhelmed standing in front of the salumi case, here’s a little primer to help you sort out what’s what so you can hone in on your favorites.

For many, the crown jewel of cured ham is that from Parma. Traditionally aged in rooms with tall, narrow windows to allow air flow, Parma ham is pink, supple, and with a distinctive sweetness and salty edge. This prosciutto is a classic paired with fruit or with its cheese sister: Parmigiano Reggiano.  DOP regulations even require that the pigs used to make it be fed, throughout their lives, the whey leftover from the production of the famous cheese along with a regulated blend of grains and cereals. Pigs of the Large White, Landrance, and Duroc breeds are chosen especially for Parma ham and are born and raised by authorized farms in the ten regions of central and northern Italy. The minimum aging time for prosciutto di Parma is 12 months, but at Di Bruno Bros., we source our parma hams from Greci & Folzani, where brother and sister team Paolo and Margherita (Paolo being the saginaturo, or master curer) get first dibs on the best hog legs. Greci & Folzani insist upon a minimum aging of 16 months for their Classico red label prosciutto, and up to 24 months for their Black Label Riserva. The longer aging time gives Greci & Folzani’s ham a smooth, sweet, even buttery flavor. 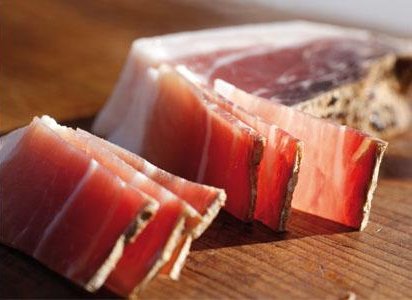 Head further north in Italy, to Friuli Venezia Guilia, where the mountains meet the sea, and you’ll still find prosciutto, but it will have a distinctive smoky flavor. Speck Alto-Adige is essentially a prosciutto produced in this northeastern region of Italy that is both salt cured and cold smoked using beech wood, then allowed to air dry. Botanicals and herbs like black pepper and juniper are added to the salt cure to enhance its woodsy flavor, but though these aromatics perfume the meat they don’t overpower the sweetness of the pork itself. 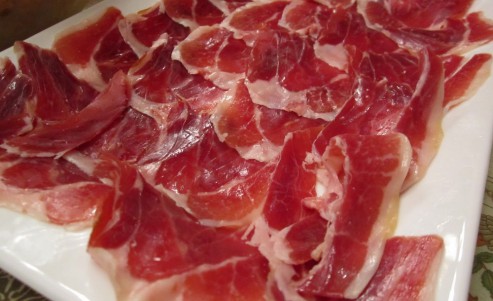 Photo credit: I’m In Spain And You’re Not

Though Italian cured hams hang for anywhere from a year to two, Spain’s hotter, drier climate speeds the aging window. Still, Jamon Serrano is by no means fast food. Minimum aging is still a year, and Redondo Iglesias, makes the 18-month aged serrano ham that we carry. Though Jamon Serrano is produced from pigs with much the same breeding as those in Prosciutto di Parma, the resulting ham is often more red in color with more marbling, and a more assertive, meaty flavor. 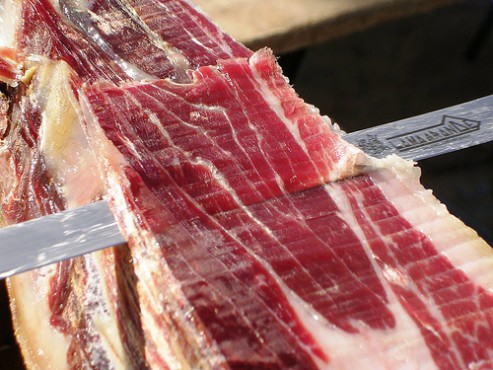 If Parma ham is the crown jewel of cured hams in Italy, Jamon Iberico is Spain’s. Produced in southwestern Spain, Iberico hams must be made from pigs born and bred in the Iberian Peninsula. The heritage breed hogs, called pata negra, because of their black hooves, are truly pasture raised (an acre of space is afforded to each one) who enjoy diverse diets that include vast amounts of acorns. The fat in the acorn nuts lend their meat a rich, almost cheese-like, umami flavor. The ham, traditionally hand sliced from the bone on a frame called a jamonera, is a deep ruby color and richly ribboned with fat. Though some are squeamish about eating the fat alongside the lean, this fat from acorns in the pigs’ diets is mono-unsaturated and actually quite healthy (these are the good fatty acids!), second only to extra virgin olive oil. Worked up an appetite? We’ve got a variety of Iberico products online ! 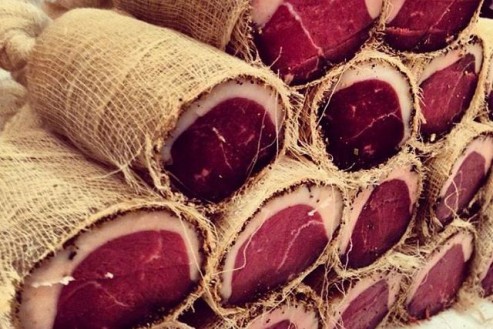 There are two problems with cured hams. First, their size requires such a long aging time that by the time they’re finished they represent a significant investment for their producers and must, thus, be sold at a premium. Secondly, plenty of people don’t eat pork and are often left out of all the salumi-goodness. River & Glen, a sustainability-focused producer in Bensalem, is solving both of these problems with their duck prosciutto. Duck breasts, with lean meat encased in a protective layer of fat, are actually quite similar in structure to hams, so they make an excellent pig-free stand in for the same curing method. River & Glen makes theirs by curing ten-day dry-aged Moulard duck breasts with spices and herbs and then curing them, swaddled in cheese cloth, for four weeks. 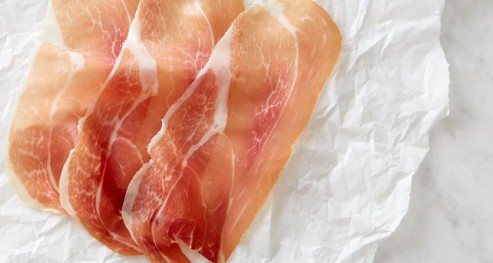 Though some purists think that one must go to Europe to find truly excellent food, Herb and Kathy Eckhouse, a husband and wife team, weren’t convinced of that idea. Having lived in Parma and studied prosciutto-making, they started experimenting with curing hams when they returned to their native Iowa—where pigs outnumber people.  Eventually, they launched their company, La Quercia, to produce American made cured meats as good as, or even better than their European counterparts. Freedom from DOP regulation leaves La Quercia free to improvise. One experiment that has paid off well was to making prosciutti from heritage breed Berkshire and Tamworth pigs. The Berkshire hogs produce a prosciutto that is pink and beautifully marbled, tender and sweet, whereas the Tamworth prosciutto is darker, brassier, and richer, and trying both side by side offers a chance to see how something as specific as breed can make such a difference in the finished ham. La Quercia has a local connection as well! On a trip to Philadelphia to visit their son who attends a nearby university, the Eckhouse family stopped by Di Bruno’s, talked prosciutto, and the meaty connection was made! 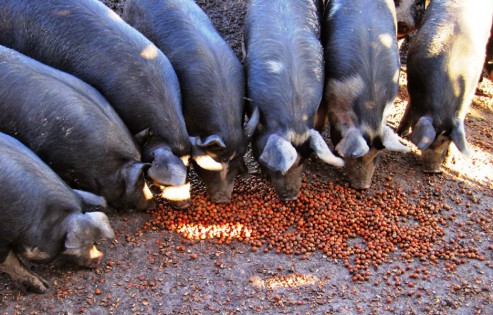 On your next visit to our Charcuterie counter, branch out and try one of these beautiful hams from close to home or from abroad.

I will be in South Philly on Friday (11/09) afternoon to pick up some items for a charcuterie gathering. I have a meat slicer and would like to get some Parma ham and prosciutto that has not been sliced. Do you have this available?

Yep, not a problem! Ask for Tommmy when you visit, and be sure to try some cheese while you’re there!

Do your meats have nitrates or other cancer causing preservatives. ?
Thank you

Be sure to check out the amazing line from Coro.
They use celery juice vs nitrates.