Last year, I was delighted to visit Jan Dirk De Groote Voort’s North Holland farm and cheesemaking facility: Remeker. I had known Remeker for Jan Dirk’s Cheese, RYP, or Remeker the Pure, of which I had eaten I know not how much before visiting his farm. The cheese had always stood out to me, for its flavor and style, as well as the stories of the Jan Dirk, his farm, and its cows. Surrounded by oak trees and comprised of a handful of thatch-roofed, high-beamed buildings, Remeker was both sweet and elegant, but the fairytale charm was deceptive. Remeker proved to be beyond cutting edge, albeit mostly deindustrialized, and the model system for contemporary research in agricultural science. How could I not be thrilled?

Naturally, I love visiting cows. This is universally the favorite part of any farm visit or cheese fieldtrip, and the Remeker cows were unique, indeed. When I arrived, I watched their delicate gait through the trees, and later I would encounter them in the field, curious but content, never skittish or over-excited. Cocoa-brown, sometimes snowflake-spotted, svelte and deer-like, Remeker cows could have easily become the star of the day, but Jan Dirk was sure to emphasize this idea: cows are just a link in the chain. Remeker, as a facility, epitomizes agriculture as community ecology, a golden circle where most of the circumference is comprised of soil.

Pastoralism, the herding of grazing animals for milk and meat, is one of my favorite human innovations. Of course, cheese is a result of pastoralism, which is great in its own right, but beside that, the practice really is brilliant. Humans cannot digest grass, so all the nutrients packed into expanses of grassland remain inaccessible. As pastoralists, though, we employ cows, and other grazing mammals, as grass-digesting machines, turning inaccessible plant nutrients into digestible milk nutrients (how we are able to digest milk [or not] is another, though intimately related, story for another time). Dairying, as such, turns out not to be a system of animal husbandry, but a system of land management. 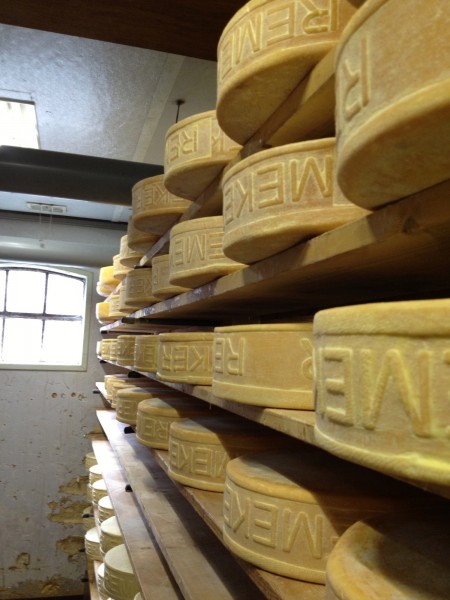 The farm is a circle, from soil to grass to cow to soil. Each link receives the processed and now-available, nutrients and minerals of the previous link, and leaves its own for the next. Soil itself is a complex system: decomposing plant matter, manure, raw minerals released from bedrock, the vital microbial community, and a vast diversity of molds and invertebrate animals. As much of a quarter of soil, by mass, is alive. Standing in Remeker’s pasture, my shoes were covered with this very community, and despite any human urge to connect with the critter most closely related to me, that which stood about as tall as I, at whom we awed at as she nipped my scarf, I quickly learned the animals that would fascinate me most that day would not be cattle. They would not be mammals, or even vertebrates for that matter, but earthworms.

The role of earthworms in Remeker’s ecology cannot be overstated. Researchers at Wagenigen University found over 500 individual worms per square meter (in a 20cm deep sample) at Remeker. This is a remarkable concentration for a region that is almost entirely under sea level (think of what happens to earthworms when it rains). The diversity is high, too. Jan Dirk mentions three distinct types that are most prevalent, each of which displays unique burrowing and foraging behaviors, resulting in more soil, and different elements of it, getting processed, be it metabolically or mechanically. By breaking down larger pieces dead plant matter, earthworms create surface area for microbes (a huge diversity of fungi, bacteria, and protozoa) to more efficiently decompose these materials. The microbes turn the decaying matter into more simple nutrients utilized by plants, small animals, and other microbes, while producing the carbon dioxide necessary for photosynthesis by plants.

As earthworms burrow, they aerate the land, making atmospheric oxygen and nitrogen more accessible to the soil community. A microbe-rich soil is necessary to convert atmospheric nitrogen into a form that plants can utilize. Nitrogen, of course, is the key element in amino acids, and thus proteins, so think of it like this: you need a lot of nitrogen to make all that casein in milk. The availability of atmospheric gases is a bonus, but the drainage provided by wormholes is also of great value. The perforated soil absorbs a great deal of rainfall before transforming into an unstable mud-land. This is particularly noteworthy in the Dutch landscape, which is almost entirely below sea-level, and permits Jan Dirk to extend the pasturing season of his cattle. This facilitates more months of grass-fed milk and fewer months of hay-fed milk.

Soil that is rich in both nutrients and minerals feeds to the next arc: the plants. The plants are not passive players in this scheme. Rather, they are the real food-factory of the operation, producing their own sugars and packaging the nitrogen from the soil into amino acids and proteins. Well-fed by the soil community’s by-products, Remeker’s pastures burst with a great diversity of grasses and herbs, including dandelion and clover. The relative abundance of certain plants allows Jan Dirk to evaluate the quality of his soil, as the success or failure of certain species may indicate an imbalance of soil minerals which must be corrected. 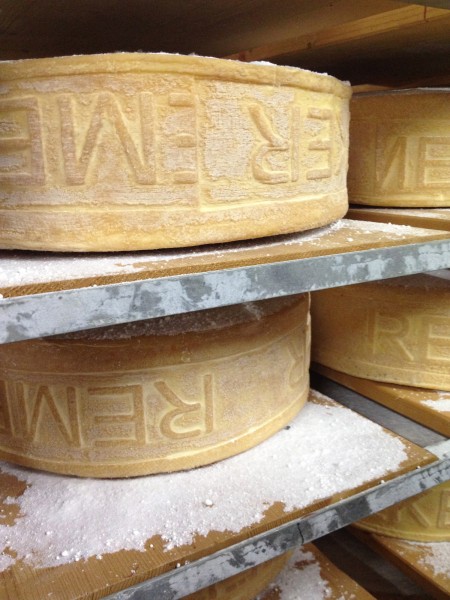 The plants, of course, are to feed the cows, whose unique gut morphology (we’ve all been taught, albeit mildly inaccurately, that cows have four stomachs) and endemic microflora (more bacteria!) facilitate the digestion of cellulose, which is why we chose to enter this entire pastoral scheme to begin with. The diverse pasture means that the cattle are receiving a full complement of nutrients, and the richness of the soil is transmitted to the milk, equally rich and distinct in flavor. In addition to this fine pasture, Remeker’s cows are given high quality straw. Jan Dirk stresses the relationship between the straw and the soil, as it isn’t merely fodder and bedding. Straw will side-step the cow in the cycle, feeding directly into the soil, and this quality straw is apparently favored by the earthworms that do as much work at Remeker as the cows and the cheesemakers.

The cows and their gut bacteria process the plants into the well-known, but rarely mentioned, arc in the circle: poop. The manure, which has no odor (I smelled it) is as nutrient-rich as the soil whence it started, and falls right back to be broken apart by earthworms to feed to the microbes who feed to the plants, which feed the cows, and so on. Jan Dirk famously never gives his cows antibiotics. Of course, this is a healthy move for the cows, and their gut bacteria, but it’s an even healthier move for the soil. Residual antibiotics are passed through the manure into the soil, where they kill off the native microflora and ward off the earthworms; it’s this very community of that makes Remeker’s soil so rich and unique. Letting the soil ecology flourish is the key to farming. Perhaps we should call it microbial husbandry or worm-herding; the cows are just there to do the eating for us.

But what about the cheese? This biogeochemical cycle makes a nice diagram in an ecology textbook (I mean, doesn’t it just!), but why should we care if we aren’t getting a stellar product? Would Remeker the Pure taste just as good if it were made elsewhere, from milk of cows that lived in a different ecological circle? We can say, conclusively, no. In addition to researching Remeker’s soil ecology, scientists at Wagenigen University have investigated flavor development and quantified the volatile chemical profile of Remeker the Pure, comparing it to that of other Dutch farmhouse cheeses and typical grocery store cheese. The results indicate a chemical profile that is not only distinct, but more intense than that of the controls used in the analysis.

It’s hard to argue with science, but really, who needs to try? Have you had Remeker Pure? Permit me to tell you that you should. It’s an exquisite cheese, a style truly in its own class. Born of a history of Gouda-making, RYP’s natural rind is formed by rubbing the wheels with ghee, a clarified butter, also made from the milk of Remeker’s handsome, and lucky, Jersey cows. Although it’s made a little differently, Remker’s Gouda roots come through in its waxiness and touch of sweetness. The flavor is indeed remarkable and complex, the rich, butter quality reminding me of poached lobster or soft scrambled eggs. The subtle spiciness in the finish, which reminds me of the herbs Jan Dirk uses to ward off cheesemites in his aging rooms, evokes dill and caraway, sometimes even root beer. This stuff is good; the other golden, harmonious circle to be found at Remeker.