Join us at Rittenhouse, Ardmore, & Franklin stores on NOVEMBER 9th to 15th from 11am – 2pm

The Alps are the largest mountain range system in Europe, stretching through such prime cheese-making countries as France, Germany, and Switzerland. All summer, small herds of cattle graze the lush, grassy mountains. Their sweet, herbaceous milk is then collected by cooperatives of dairy farmers and transformed, using traditional, centuries-old methods, into notoriously large wheels of cheese. Alpine cheeses are loved by cheesemongers for their consistent quality and complex flavor. They also melt mighty well so if you’re looking to fondue or create amazing grilled sandwiches, you’ll want to go with an Alpine. Rich in history, teamwork, excellence of terroir, and of course flavor, we all go Alp-wild for this family of cheese!

Join our savvy cheesemongers in stores during Alpine Week (Nov 9th to the 15th) as they play Sherpa and guide you through cheeses from the highest mountain peaks! Come visit our Rittenhouse Square, Franklin Market, and Ardmore Farmers Market stores on November 9 – 15. Samples will be given each day from 11am to 2pm—so swing by on your lunch break to try some delicious Alpine treats!

GUIDE TO THE ALPINES You could run out of breath imagining sun-warmed meadows when you taste the toasted sesame and dryer-warm linen of this cheese. Your mind just won’t stop running! Le Cret 1655 is the hallmark specimen of Gruyere, being both representative of the style and an outstanding example of how good it can be.
Not all Gruyeres are granted the 1655 seal. Each wheel of AOC Gruyere is scored on a scale of 1 through 20. After five consecutive years of consistently earning 19.5 and above, Le Cret earned the stamp of 1655. Why 1655? That’s the year this recipe, which was already 500 years-old at that time, was first given the proper name Gruyere. What’s even older? The glacier-washed caves Le Cret sources their sel des alpes are 200 million years old. From Columbia Cheese’s partners, Fromage Gruyere S.A., comes this raw cow’s milk washed rind Gruyere. Made in Canton Fribourg, Switzerland by cheesemaker Charles Boschung and Affineur Gerald Roux, a group of farmer and cheesemakers lead their cows high into the mountains from their surrounding valleys to produce this beautiful Alpine cheese. Reading Raclette, with its blushing rind and sweet-but-funky paste, is a superb domestic raclette with no bells or whistles. You won’t find “our take on…” or “a new spin on…” in a description of Springbrook Farms’ representative of the traditional Alpine melter. This specimen will impress the most critical champion of authentic, Old-World raclettes.
The name “raclette” comes from the French “racier,” “to scrape.” Raclette was traditionally a herdsman’s cheese—one made for themselves and not for market. After allowing it to melt by the evening fire, barely encased in its rind, the cheese would be scraped over hot potatoes and other mountain provisions. Now raclette is one of the prized styles of Alpine cheese, still lending itself to the communal meal. Scrape away, dear friends! The origin of what Americans know as “Swiss cheese.” A firm & tangy cheese with a wide variety of uses & pairing possibilities. The Grandfather, of what we in the states know as Swiss cheese, Emmental was originally produced in the canton of Bern in Switzerland, though its imitators can be found around the world. It is made from cow’s milk and comes to us from Switzerland in wheels weighing as much as 200 pounds. It has a distinctly tangy flavor with a fruity sweetness to the finish and can be paired with a wide variety of fruits and raw vegetables. Along with Appenzeller & Gruyere, this is one of the classic ingredients in traditional Swiss Fondue. There is nary a flavor note from the Alpine profile that isn’t played in Comté Symphonie. This cheese is aged for (often over) two years by Marcel Petite at Fort St. Antoine to develop unrivaled complexity punctuated by fine crystals. Flavor after flavor will appear on your palate in a taste evolution worthy of Willy Wonka. No flavor will out-compete another, though: they play together in perfect harmony.

The Comté Flavor Wheel is a graphic device designed to organize, identify, and relate the vast range of aromas known in the great Comté cheese. The categories of Spicy, Lactic, Fruity, Roasted, Vegetable, and Anmal radiate into finer, more distinct flavors. 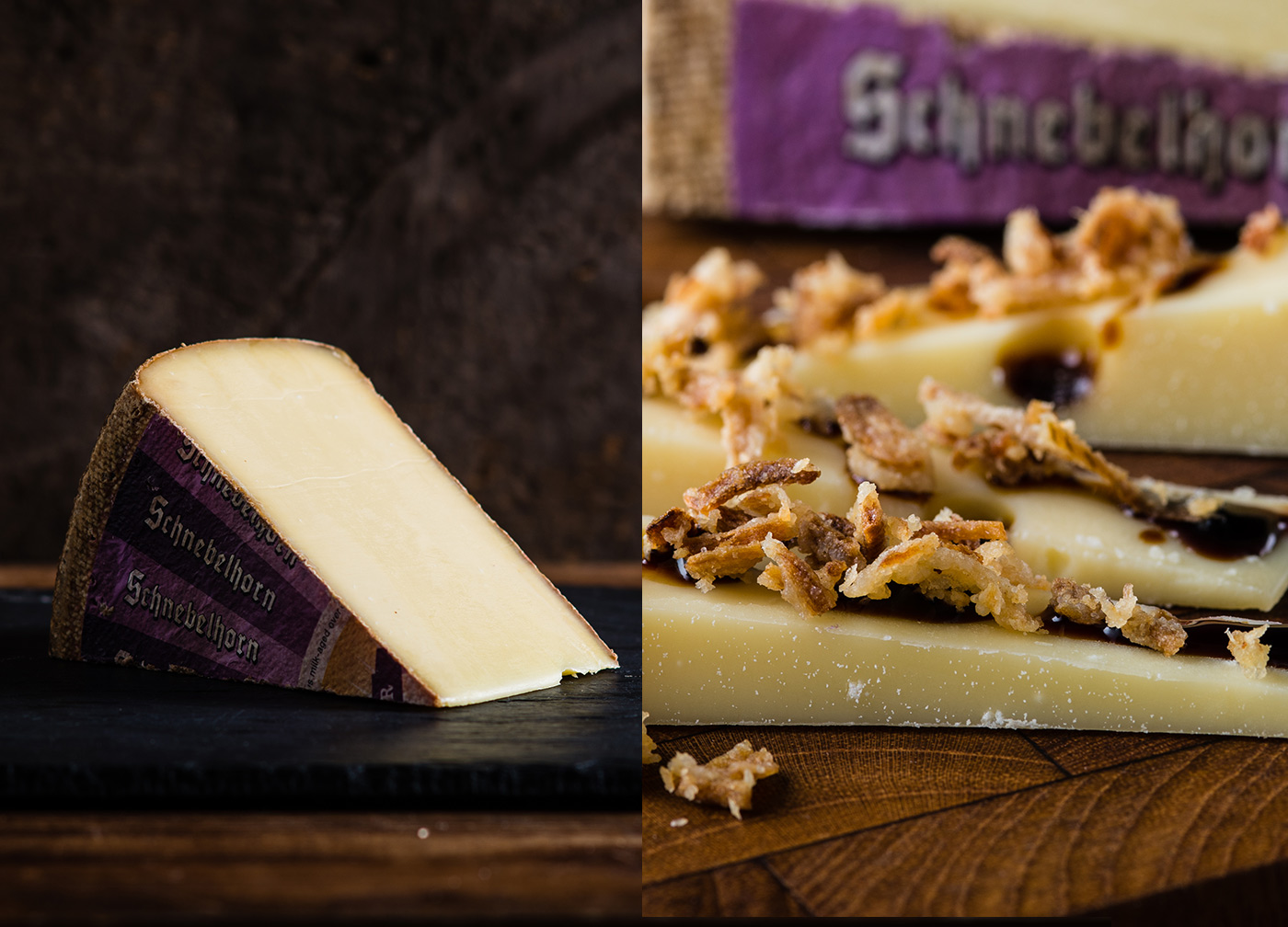 Simple, rustic, yet absolutely divine. Aged in a former military fort for up to 24 months. The cheese all other cheeses aspire to be! 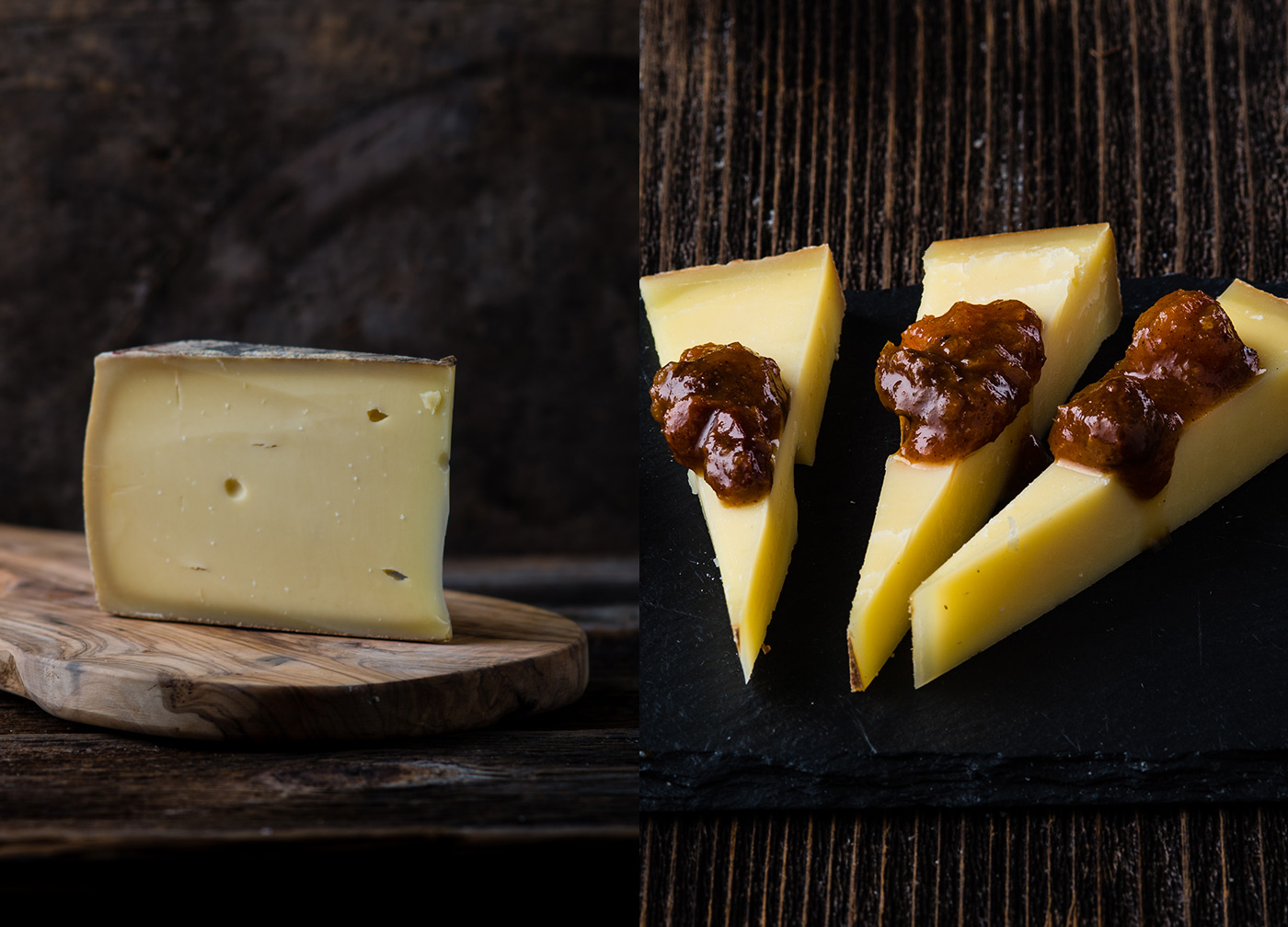 Challerhocker is the Swiss for those who think they don’t like Swiss cheese. Gone is any tinge of astringency, leaving the buttery background for the subtle flavors of our beloved Alpines: vanilla, hazelnut, and a touch of almond. The paste is velvety smooth and just this side of hard—you can really sink your teeth into it.

Cheesemaker Walter Rass comes from a long line of Appenzeller producers. Subsidized by the Swiss government, Appenzeller production is a guaranteed income. Rass took a risk putting more and more energy into his beloved “pet project”  Challerhocker (which means “cellar-sitter” and refers to those who watch over the wheels as they age). After years of increasing its production, though, Rass can finally afford to quit the Appenzeller game. Cheers to the diversity of Alpine cheese! Join our Certified Cheese Professional, Rich M. and special guest, Glenn Hills from Columbia Cheese, for a night of cheesy exploration through Alpine cheeses! Our resident CCPs will educate you on Alpine cheese families, flavor profiles, differentiating milk types, textures, and more. Our Rittenhouse Upstairs Café becomes yours for the night as you taste the world of Alpine cheeses—including 1655 Gruyere, Reading Raclette, Emmenthaler, Comté Symphonie and more! Our professional cheesemongers will even give you wine and beer pairing suggestions in advance so you come to class fully prepared!