So many buffalo, so little time.

When we first sat around the office and started the discussion about impending football season, more than one person mentioned a buffalo-related recipe.  We quickly put together a roster of delicious, spicy things that we’d all happily eat around a good ballgame and marked it off on the calendar, ready to move on to the next topic, until from our pool of desks came the question, “What does ‘buffalo’ mean?”

We all stopped and swiveled around to look at Erin F., our beloved designer, who looked back at us blankly.  A couple of us stuttered and snorted, saying things like, “Come on, you know, like, ‘buffalo wings’?” and “Haven’t you had, like, buffalo chicken pizza??”  To which Erin replied, “Well yeah, but what does ‘buffalo’ mean, exactly?”  And the office fell silent.

Much in the same way I would tell you I love tacos al pastor, or crème brûlée, I know that “buffalo” somehow equates to “darn yummy” without actually knowing the origins of the word.  Thanks again, Goog-a-Pedia, for saving my butt.  (Bonus points:  That’s “Google” and “Wikipedia” combined for the win!)

Buffalo style foods are usually deep-fried, like chicken wings, and doused in a vinegar-based hot sauce mixed with melted butter and cayenne pepper.  The origins are hazy, but all lead back to the town of Buffalo, New York where several “genesis tales” of this now-renowned snack exist.  Other popular buffalo trends include practically anything doused in the signature cayenne-butter sauce, or as many people swear by, Frank’s Red Hot.

This is Di Bruno’s, however, and while we may be mixing up some classic game-day nibbles this week, we went a step further by making our own gourmet hot sauce (to which, after the taste test, we are all now addicted).  Let’s start with that essential, which I’ll be using in every buffalo recipe for the next 6 days. 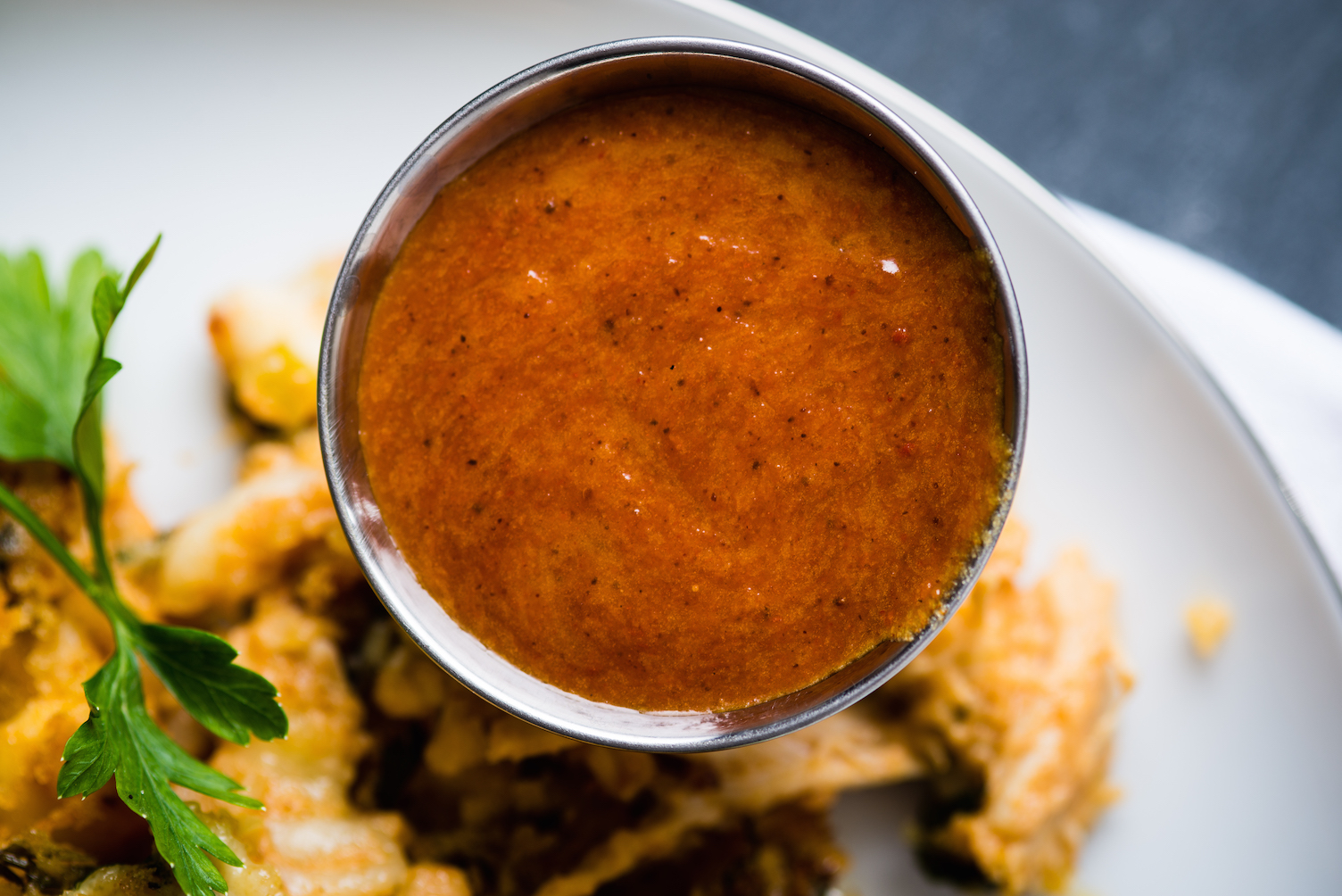 Pour one cup of hot sauce in a pot (I used our newer line of A&B Pepper Sauces, small-batch hot sauce made in Brooklyn with zero artificial flavorings or added sugars).  They have 3 flavors, and heck if I didn’t mix ’em all together like a buffalo-crazed genius.  The mix ended up being about 60% Original, 30% Garlic, and 10% More Heat.  Then add a half-cup of butter, which is 4 oz, and you can be fancy like me and use what I call “fun butter”—in this case I used Kerrygold grass fed butter from Ireland.  Melt it up good and toss in 2 tablespoons of straight-up cayenne pepper.  Mix well, pour onto everythang.

For this too-good-to-be-blue mac and cheese, I chose a killer combo of three cheeses that will seriously “mac” a difference in your recipe.  Forget that government cheese, we’re doing award-winners here.

Instead of neon-colored block cheddar, I’m kickin’ it with Cabot Clothbound Cheddar, aged by the good people from The Cellars at Jasper Hill.  Wrapped in muslin and rubbed in lard to seal in epic flavor, this is a much earthier, robust, and well-rounded cheese for your mac (read as: tastes more expensive, still super affordable).  Pair that with some Cranberry Jalapeno Jack from Wisconsin instead of faceless “pepperjack” cheese, and go for the gold with Colston Bassett Stilton crumbled on top!  Still not entirely sure what “blue cheese crumbles” means in a recipe…  One might as well say “red sauce” and “pasta-like tubes”, if we’re in the habit of generalizing.

Enough snobbery!  I’m a jaded gal when it comes to generic cheese, but please taste the full weight of my apology in this phenomenal version of Buffalo Chicken Mac and Cheese.  Ain’t she a beaut? 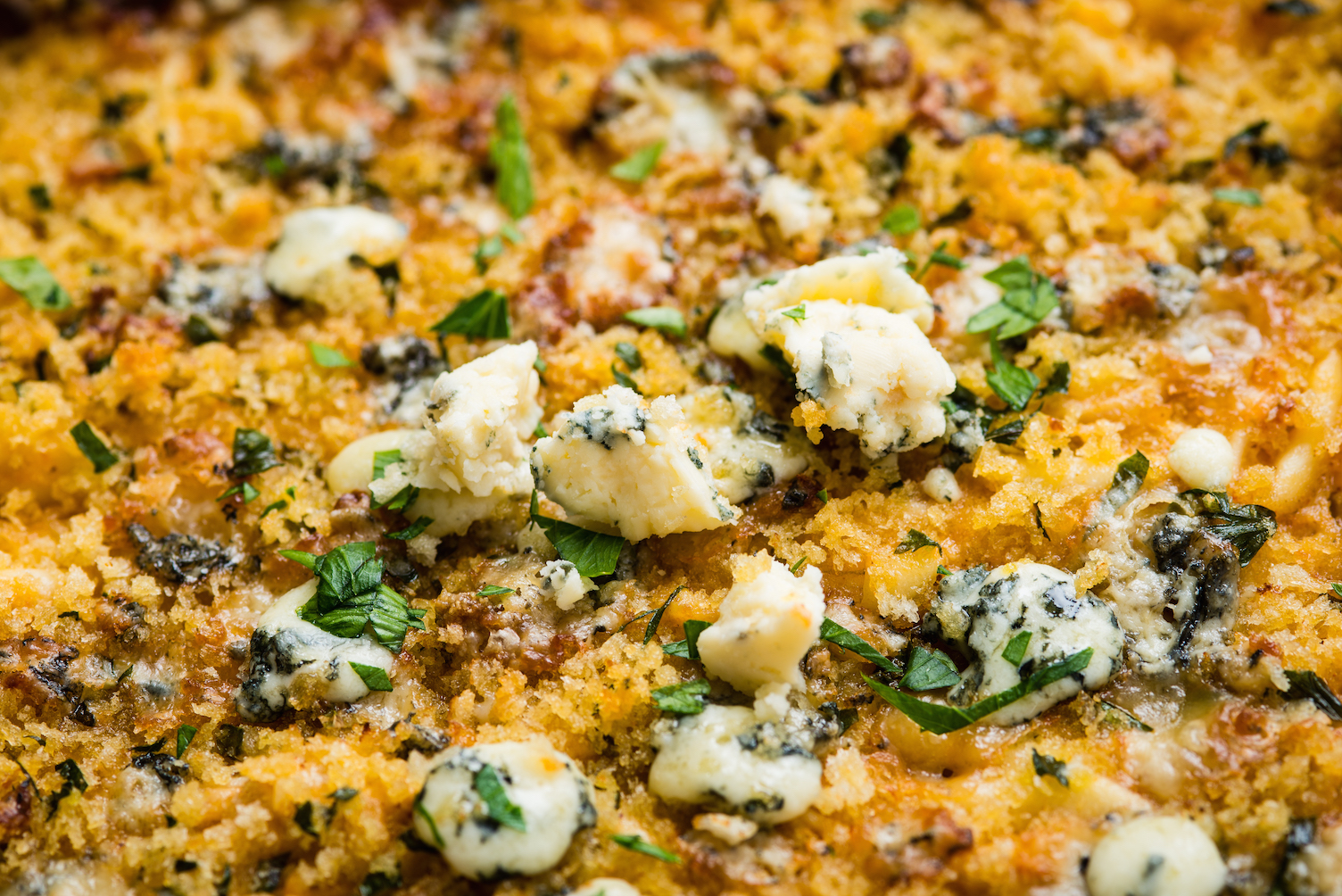 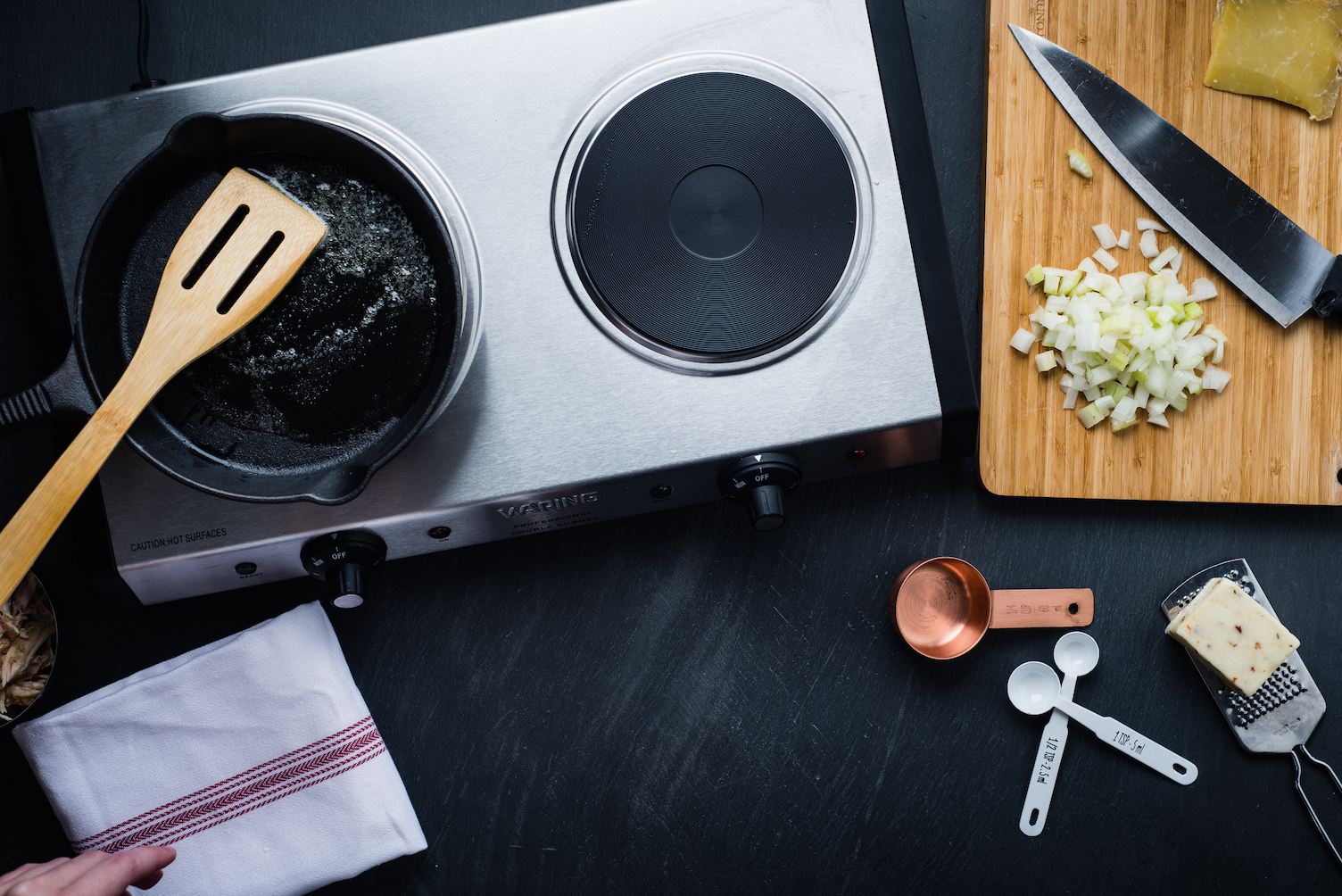 1.  Preheat your oven at 350 degrees, grab a 9×13 baking pan and spray it with nonstick magic.  Boil a large pot of water for your Cavatelli, don’t forget to salt it — takes about 10 minutes to get to al dente.  Drain in a colander and set aside. 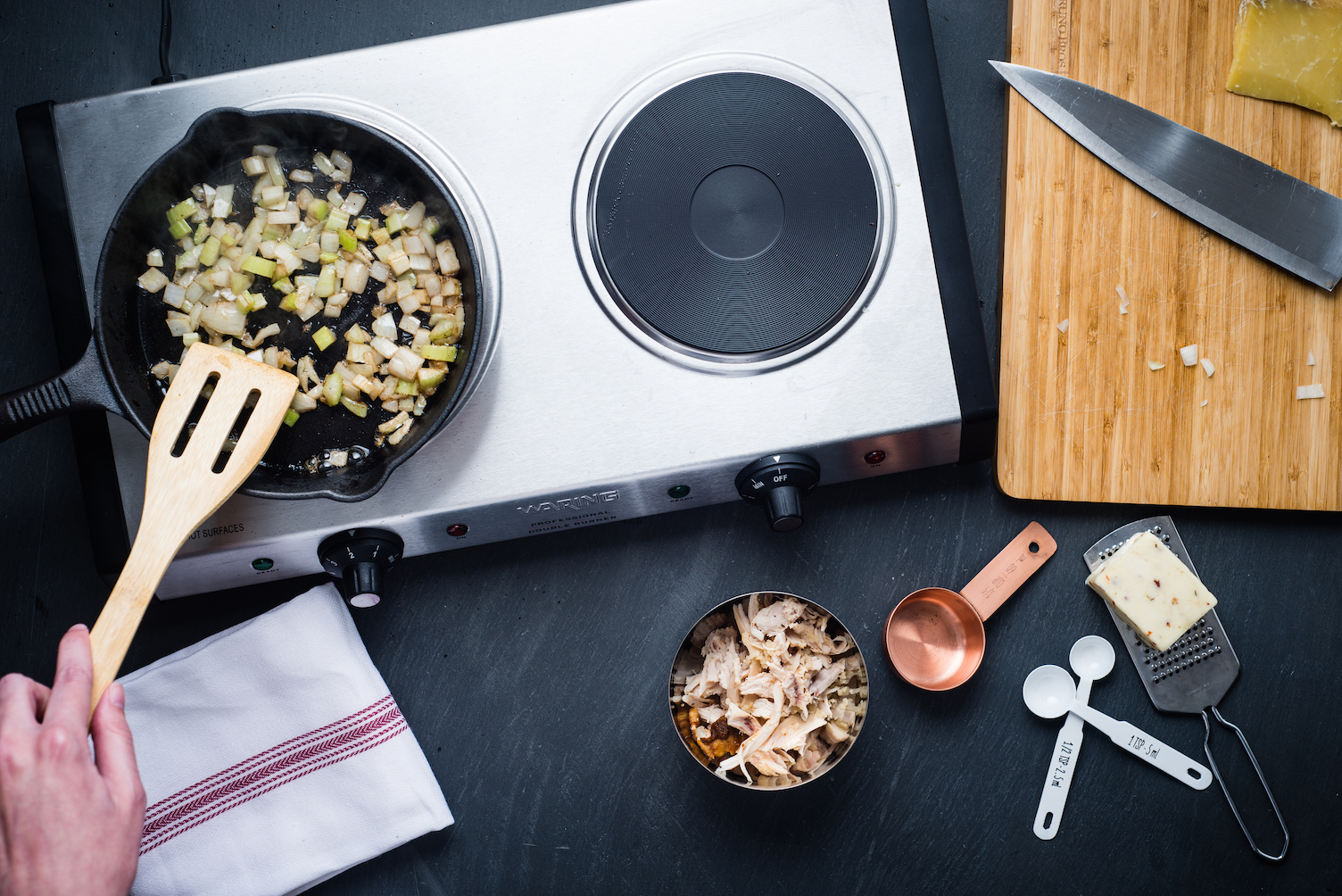 2.  In skillet number 1, melt 3 T of fun butter over medium heat, add celery and onion and cook until soft, about 5 minutes.  Then add chicken and garlic, cook another 2 minutes or so.  Then add 1/2 cup of buffalo sauce, you can skimp or splurge on the amount, depending on how many buffalos you like.  Simmer it down, now, and let it thicken for about a minute. 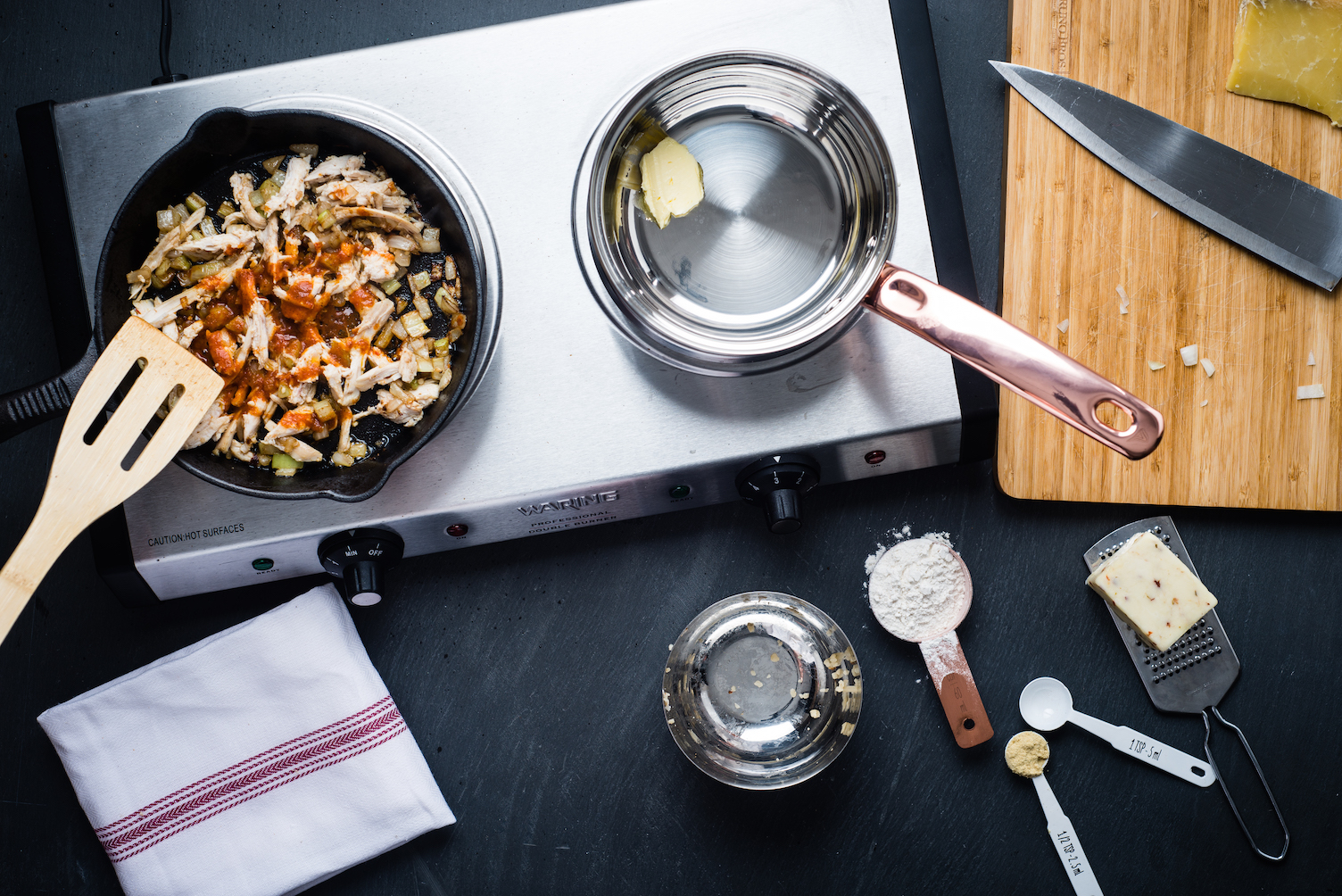 3.  Meanwhile, in skillet number 2, melt 2 T of fun butter, also over medium heat.  We’re building a cheese sauce, so we’ll layer in the fun stuff:  Start by whisking in the flour and dry mustard, then the half-and-half, and then the remaining 1/4 cup buffalo sauce and let it get saucy for a couple minutes.  Whisk in cheddar and cranberry jack cheeses a little at a time, and throw in the sour cream once the cheese is all melted. 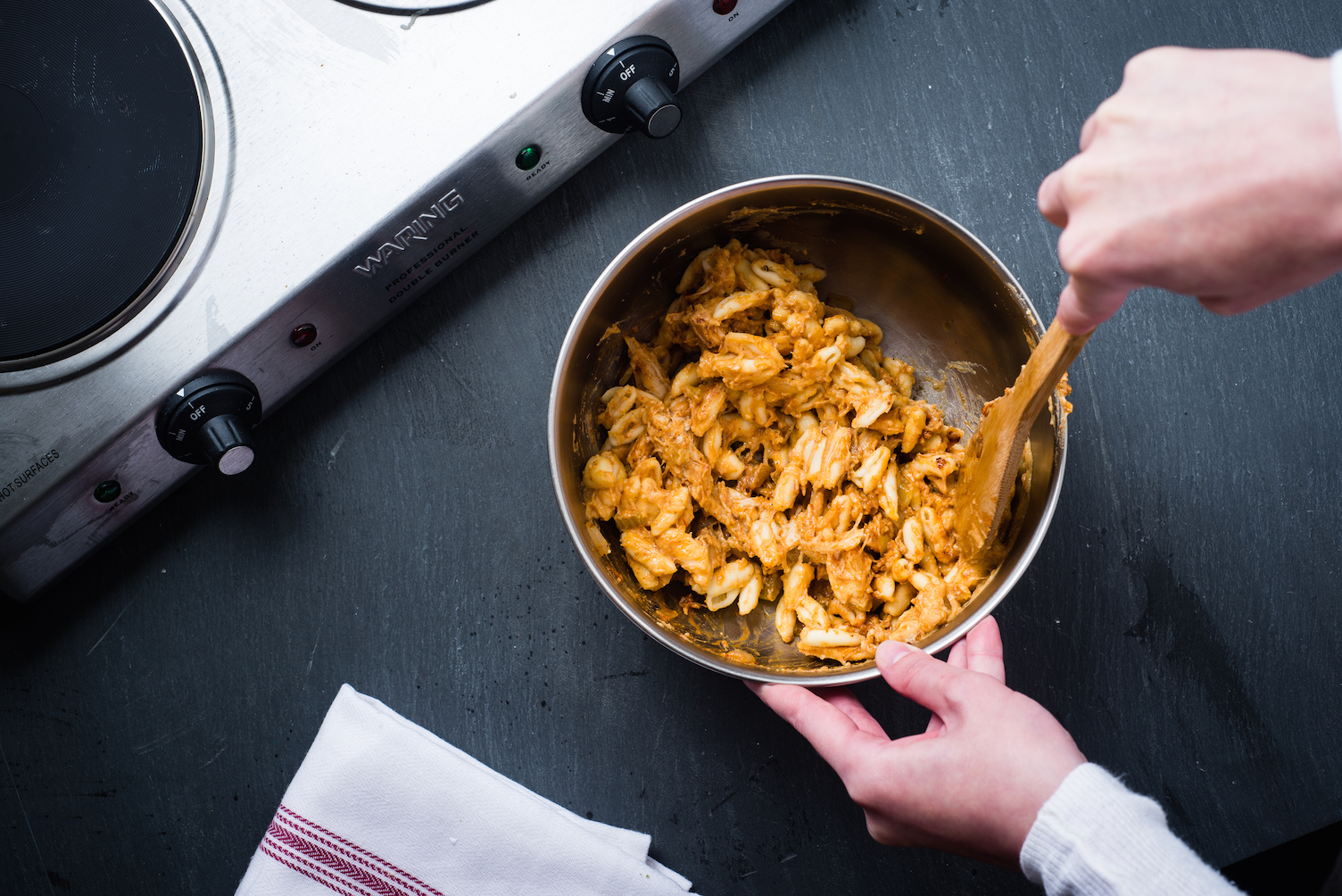 4.  Grab a big ol’ bowl and throw in the cooked pasta, the chicken magic, and the cheese sauce and stir it all up.  Try not to eat all of it, but you should totally taste-test… like I did… right now.  Pour it all into that baking dish. 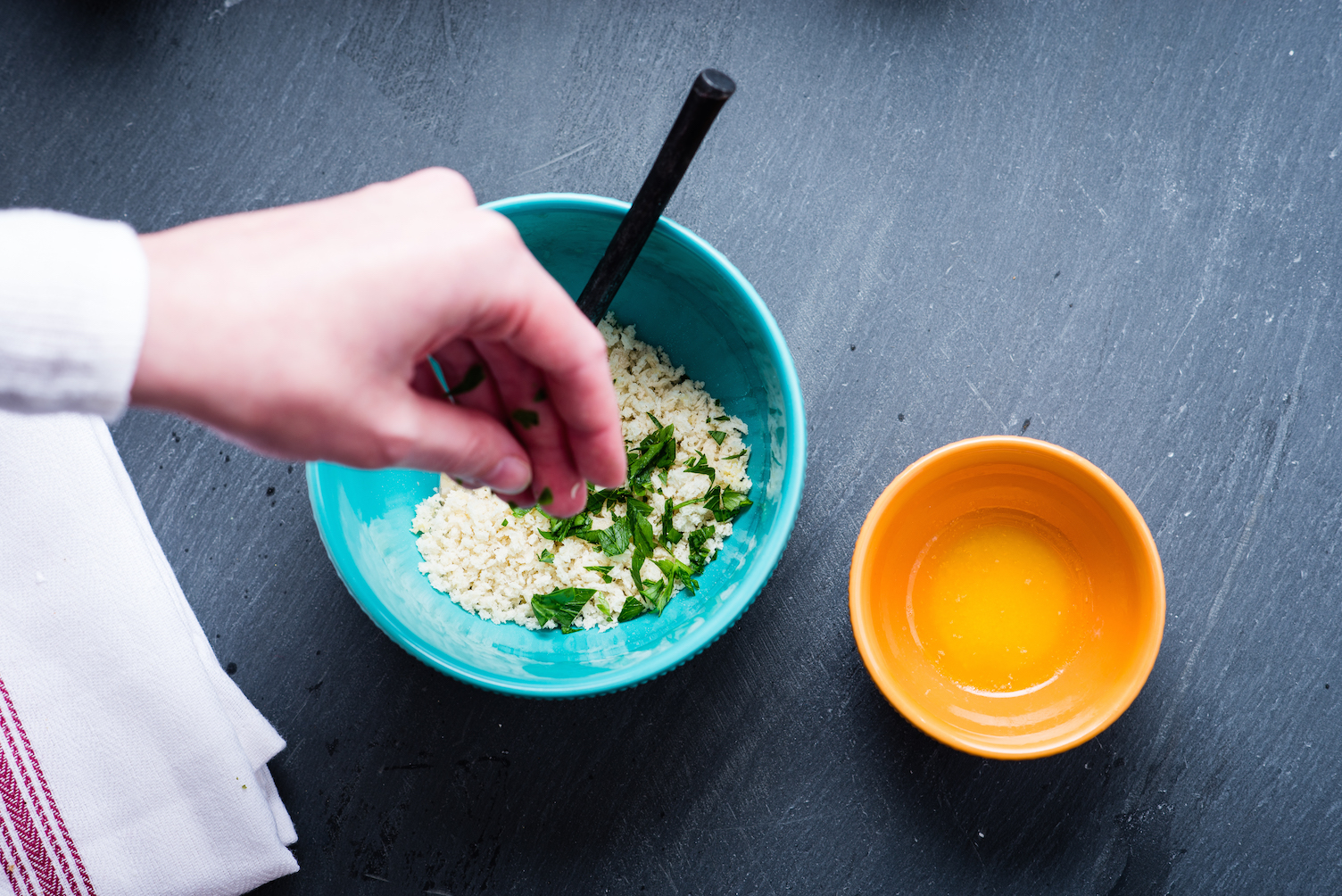 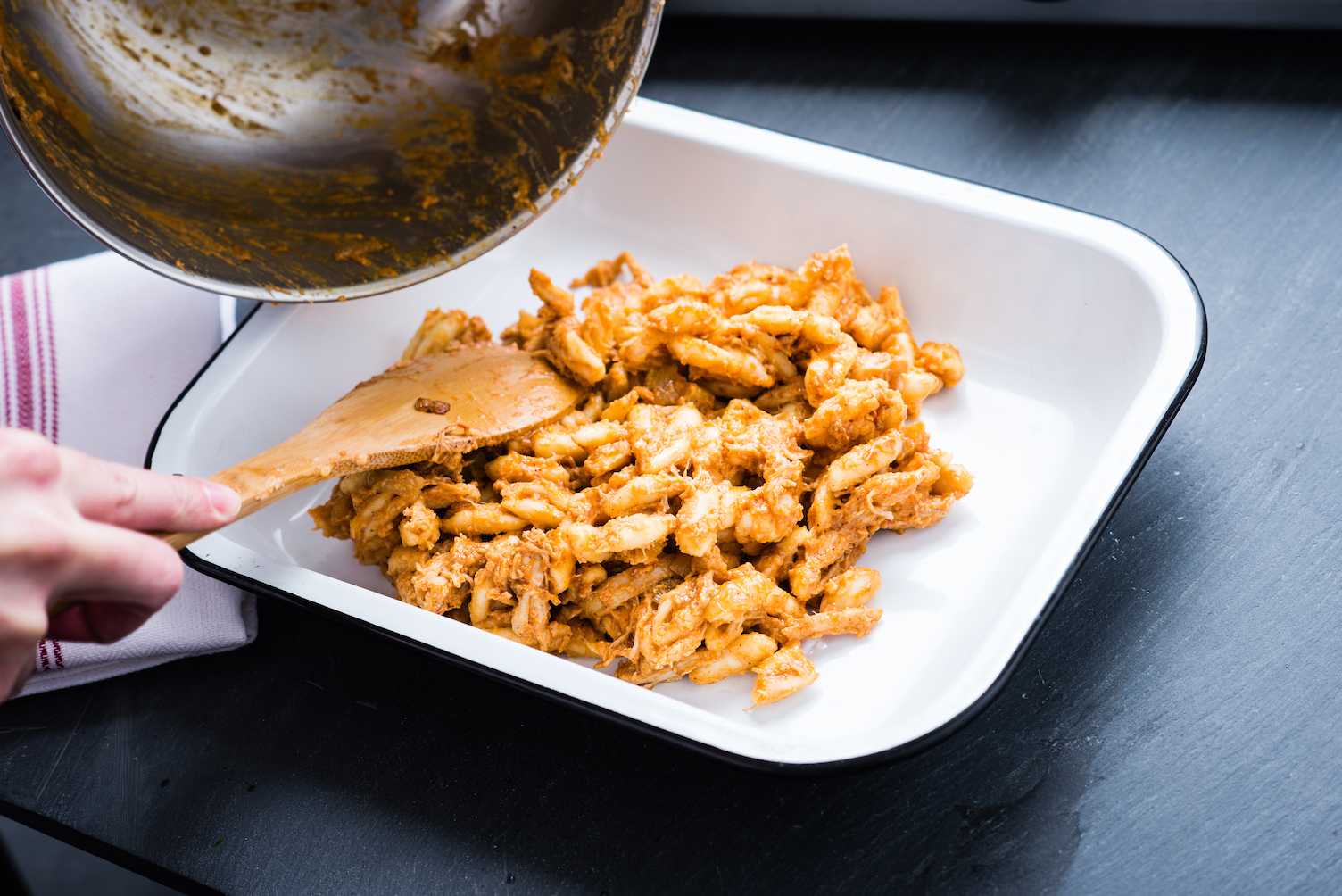 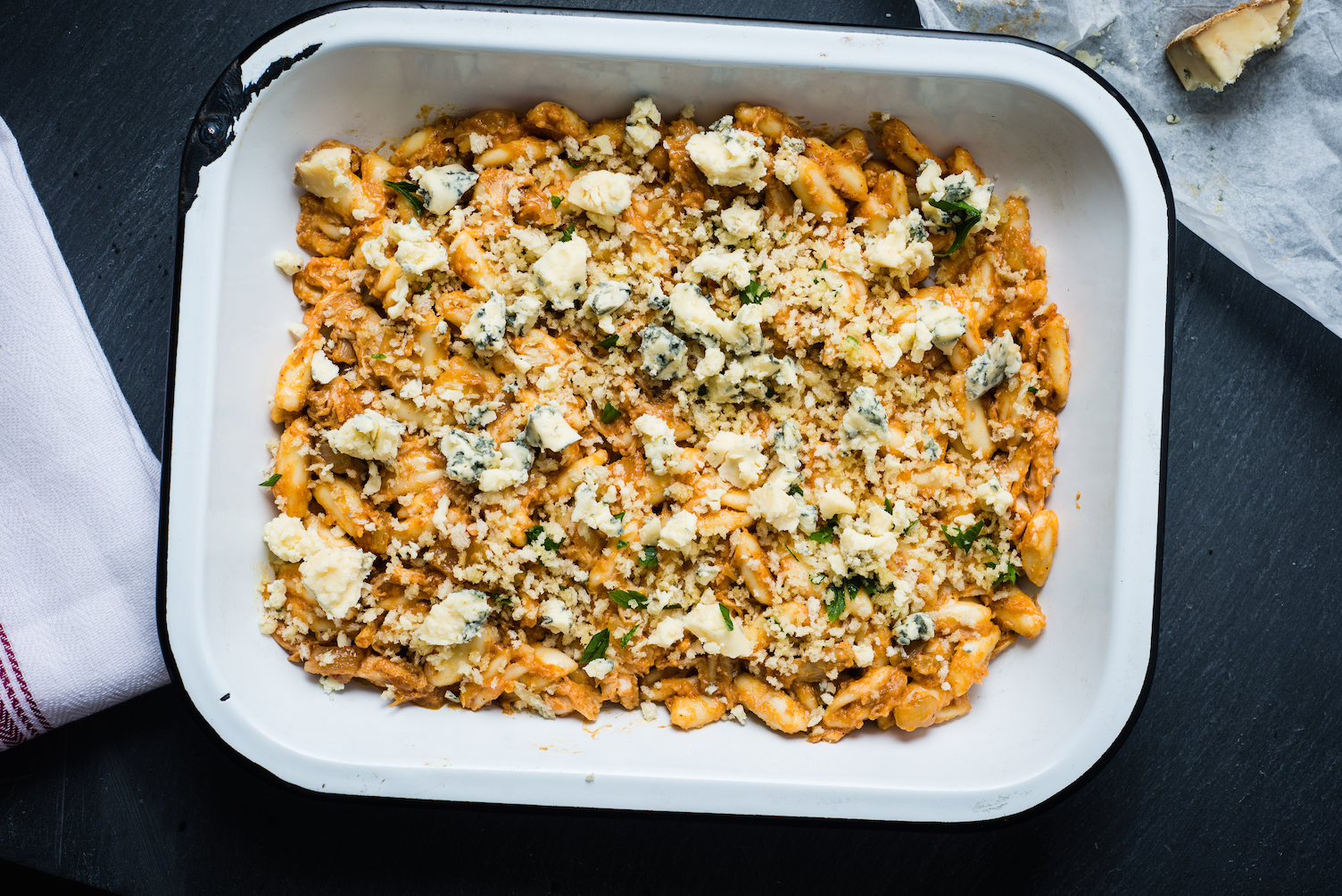 5.  Melt the last 2 T of fun butter (seriously, I can’t stop saying “fun butter”) in the microwave for a few seconds, stir in the Panko and the parsley, and spread / sprinkle over the mac.  Then, as the coup de grace, crumble your yummy Stilton all over that madness.  Bake for 30-40 minutes until cheese is bubbly and Panko is golden.  Let it rest for ten minutes before serving, or at least give it your best shot. 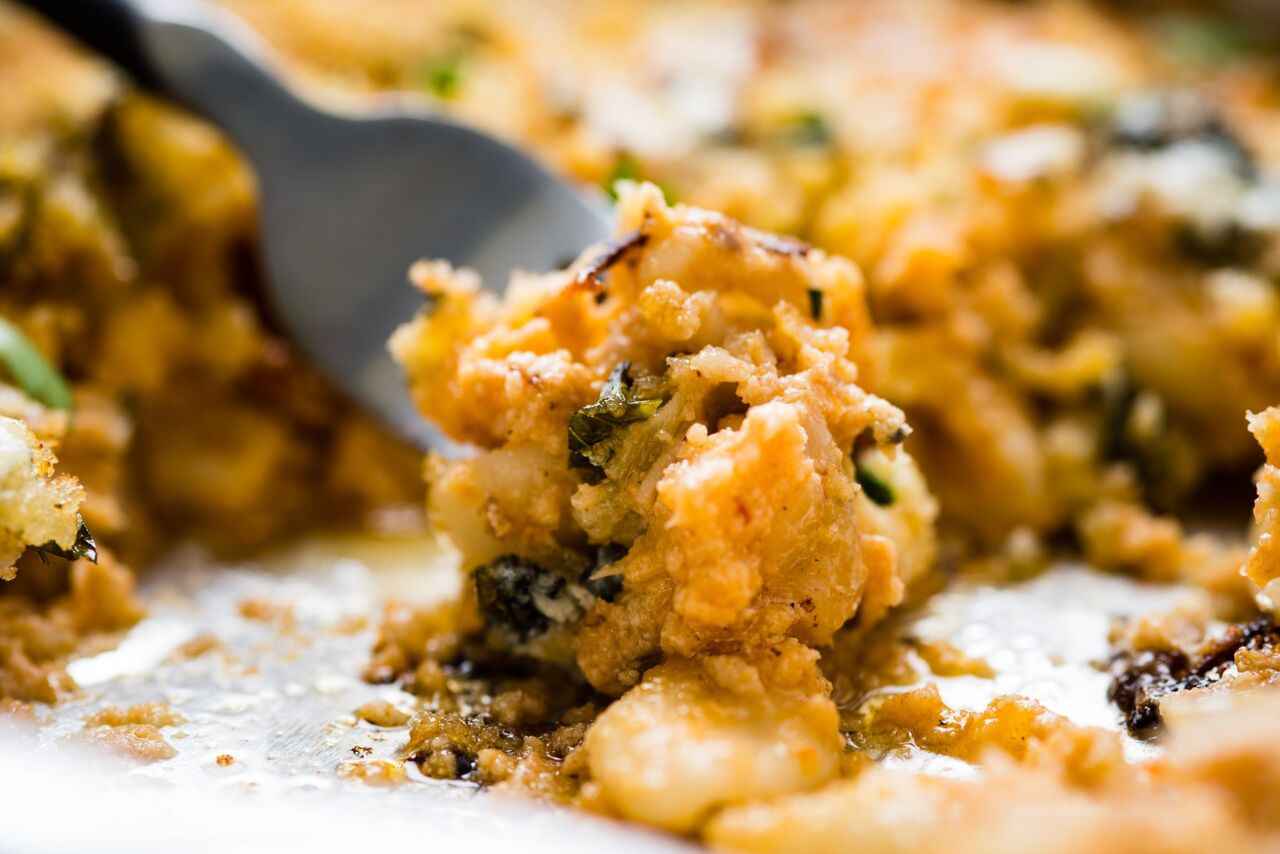