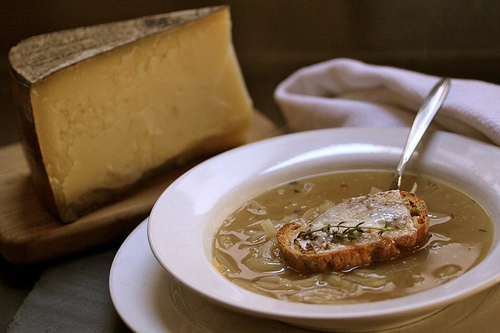 A few weeks ago, my friend Mike Geno received an 18-pound wheel of Grand Cru Gruyère from Wisconsin in the mail. The American Cheese Society (ACS) had commissioned him to paint a series of award-winning cheeses, but after he finished the portrait, he was left to scratch his head. What does one do with a whole wheel of Gruyère? Of course, I got a call.

Should you find yourself in a similar pickle, let me pass along some advice: 1) Never fear too much Gruyère, and 2) buy a bag of onions, a sack of potatoes, and a dozen eggs.

Gruyère is the trophy wife of any allium. Have a whiff, and you’ll notice that Gruyère even smells faintly like an onion: a bit brash, but sweet. French Onion Soup is the classic Gruyère chauffeur (recipe below), but you can also serve a hefty wedge on a cheese plate with caramelized onions, whole roasted garlic cloves, or even an onion-studded preserve. Cheesemonger Hunter Fike recommends a Di Bruno favorite: Tishbi Onion Cabernet Jam.

Gruyère loves her starchy tubers. Make a dinner of melted Gruyère over boiled or baked potatoes served with frizzled prosciutto and gherkins. To mix things up, melt Gruyère over a roasted sweet potato – stuff a tuft of caramelized onions or some bacon under it, why don’t ya? For a gratin of any kind, Gruyère is sublime. Need I mention fondue?

Gruyère adores eggs. No cheese turns gooier inside of an omelet or quiche. Scrambled Eggs with Gruyère and black truffle cream? Of course. Crepes with ham and Gruyère? Even better, you’ve almost got a Croque Monsieur! Squeeze a little lemon over your egg dishes, by the way, and you will never look back with regret.

Gruyère even goes with dessert. Trust me on this one. Slice some Gruyère on a nice piece of slate, drizzle some Caramel Dulce de Leche over it, and add some crushed toasted hazelnuts. Don’t fight with me on this until you’ve tried it. You can also serve thin triangles of Gruyère on top of almond biscotti topped with a thin layer of apricot jam. Add a glass of Moscato or Riesling, and the day is done.

There you go. Fear not the mountain cheese that gives and gives.

There are so many recipes for this famous dish, but few are worthy of repeating – who wants a soup with fibrous strips or a bitter onion finish? That’s what happens if you cook onions too fast over a high flame. Remember: slow and low on this puppy. Be patient, and you’ll have a sweet, slightly boozy soup with deep flavor.

Adapted from Best Ever Soups, by Anne Sheasby

For the Gruyère toasts: 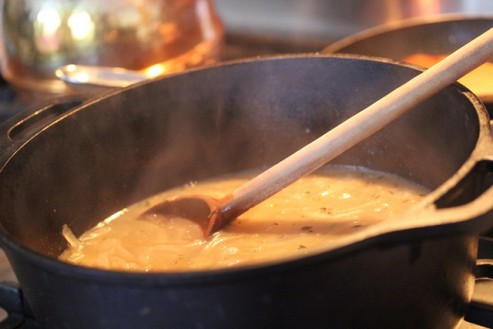 This looks fantastic! I was just pondering what to do for dinner AND I just finished a giant batch of beef stock (that needs putting away) so this is perfect. It’s only slightly tragic that I don’t have any Gruyère to go with it. C’est la vie. Although I will definitely have to try the ‘thin triangles of Gruyère on top of almond biscotti topped with a thin layer of apricot jam’ combo. I only ever buy apricot jam because it is fabulous. 🙂