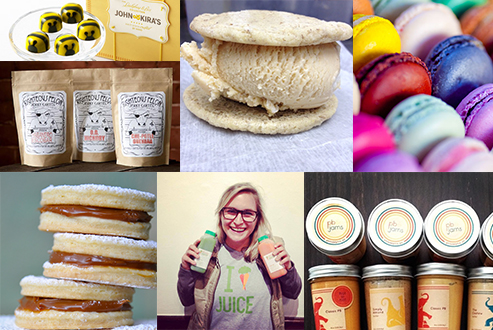 Salumi from Italy, olive oil from Spain, and cheese from France (and everywhere else, too), for 75 years Di Bruno Bros. has been bringing the best, most delicious gourmet products to Philadelphia from all over the world. Now, some of those products are coming from very close by, indeed. Though Philadelphia has long been a city of great food, every year it welcomes more makers starting food enterprises offering new, locally-made additions to our lineup.

Here are just a few of some of the excellent, Philly-made products that shine on our shelves.

Basset’s may be the classic Philly ice cream for which we all scream, but East Kensington-based Little Baby’s has put a playful, distinctive spin on the ice cream game that goes way past basic vanilla or chocolate. They start with local cream from Trickling Spring Farm’s grass-fed cows and boost it with creative flavors like the rosy-hued birch beer vanilla bean, earl grey Sriracha, balsamic banana, or vanilla molasses spiked with another Philly favorite, Goldberg’s Peanut Chews.

It gets better.  For our 75th Anniversary, Little Baby’s has gifted us with an ice cream using our products that’s downright mesmerizing.  Check it.

Olive Oil Rosemary Lemon Ice Cream—Sprigs of dried rosemary steeped in Trickling Spring Creamery’s sweet ice cream base for a day or two with a healthy amount of Manfredi Barbera Lorenzo #3 Extra Virgin Olive Oil DOP from Di Bruno Brothers with a kiss of fresh squeezed lemon juice and a pop of lemon zest.  We’ll be sampling throughout the month so come on down to Rittenhouse or our Ardmore location.

This new addition to the Philly food scene is buttering up their supporters with their West Philly-made nut butters and they go way past your run-of-the-mill peanut butter. Sure, there’s classic PB, but they also make a spicy version called Hot or Not that is practically begging to be made into a peanut sauce for noodles or satay.

Though it might not be right for your kiddo’s PB&J, it’s fantastic for mom and dad’s more sophisticated palates. They also have milky, sweet cashew butter, toasted almond butter, and the especially distinctive maple walnut butter—so rich it’s practically dessert all on its own. Check out PB & Jams on Instagram at @pbandjamsphl and try a taste at Rittenhouse, The Frankin, Ardmore, and 9th Street.

Sugar Philly’s elegant, colorful French macarons look so cheerful in the case at Di Bruno Brothers, you would never guess that they were first sold through a refurbished mobile post office that now roams Philadelphia as a cheerful food truck. The macarons are dainty little bites; rich ganache in flavors like salted caramel, green tea, tiramisu, rhubarb, and mango, sandwiched between colorful meringue cookies. They might be from Philly, but they look elegant on a table anywhere.

These guys have been planning something special for our birthday as well.  They dreamed up a macaron made with Di Bruno Bros. on the brain—Grapefruit Pizzelle.  Try one at our Rittenhouse, The Franklin, and Comcast locations.

Though Philly is a city synonymous with cheesesteaks, we’re also a city of Fairmount Park, of a legendary bike race, and of the Broad Street Run. Just over a year ago, owner Kristen Lubsen put her passion for fueling our bodies with beneficial nutrients, her love for food and desire to positively affect a food community together to make Sip-N-Glo.

Though the Glo wasn’t around when Rocky was running the steps at the Art Museum, but you can bet that he would have been sipping on one of their fresh pressed juices if it had. There’s the Green Beast (kale, spinach, cucumber, celery, apple, lemon, and ginger) and the Heart Beet (beet, carrot, lemon, celery, ginger) and smoothies like Vanilla Chia (vanilla protein powder, almond milk, chia seed), all of the above of which are far better than drinking raw eggs any day. Catch Sip-N-Glo on Instagram at @sipNglo and get juiced at Rittenhouse or The Franklin.

Some entrepreneurs start young, but few are as enterprising as Righteous Felon’s Brendan Cawley who, along with two friends, started pushing beef jerky (that he made using a dehydrator he bought with his birthday money) to his middle school classmates when he was twelve.

Started by husband and wife duo, John Doyle and Kira Baker-Doyle, in 2000, John & Kira’s line of handmade chocolates includes Spanish figs filled with a whiskey chocolate ganache, adorable Basswood honey caramel-filled bees, and the sweets with which they began, elegant ganache squares infused with locally grown mint or berries, and thoughtful additions like bergamot, lavender or Hawaiian ginger. Though they’ve received national acclaim for their sweets, their production remains right here in Philadelphia.

Visit us and find these hometown favorites shining on our shelves along with dozens of other Philly favorites like Le Bus Bakery and Frangelli’s Bakery—not to mention all of the local cheese we proudly carry. We’re delighted to have been and continue to be a part of the fabric of Philadelphia for 75 years, working alongside our fellow local food purveyors.  Get bees and more at Rittenhouse, The Franklin, and Ardmore.

These guys are just a few of the incredible local vendors we work with, there’s dozens more where that came from!  Stay tuned each month as we feature a new vendor and learn their story.  In the meantime, grab a taste of these local flavors.