There is an Italian saying that goes, “A tavola, non si invecchia.”  It means, at the dinner table (with family and friends) one does not become old. 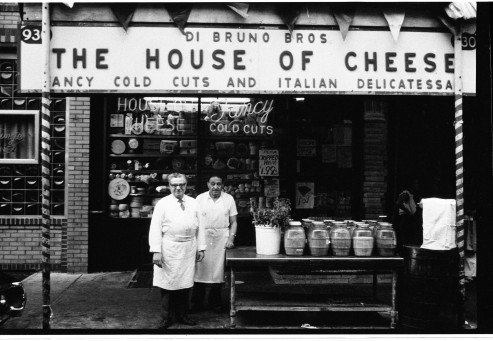 For 75 years Di Bruno Bros. has offered nothing but the highest quality products, made with integrity (often in-house), and infused with the story of the people who made them.  It’s a story of discovery, of two brothers, aunts and uncles, of Culinary Pioneers and Philadelphians. And it is that dinner table mentality that has enabled Di Bruno Bros. to not only endure for so long, but also to grow and prosper both locally and nationally.  And we’re just getting started.  So pull up a chair.  This is our story.

The business, Di Bruno Bros., has been a mainstay in Philadelphia’s Italian Market on 9th Street for 75 years—a remarkable testament to the ingenuity and fortitude of their grandfathers, the founders, Danny and Joe Di Bruno. It is 1990; Billy Mignucci Jr. and his cousins Emilio Mignucci and Billy, are in their grandparents’ living room with the rest of the family, discussing the transition of the family business to this new generation—more on this later.

Danny and Joe put it all on the line in 1939, when they used what little money they had (and some they borrowed) to open a small grocery store on S. 9th Street in Philadelphia. Initially they served a community still feeling the effects of the Great Depression by selling bulk amounts of pasta, large tins of olive oil and pounds of salami. They even made their own mozzarella and vinegar, which they bottled and sold alongside their myriad food products and supplies.

The brothers didn’t begin the transition to the bustling specialty store we are today until the 1960s, when the emergence of large supermarkets and the need to differentiate made them take stock of their business. Danny, inspired by a vacation to Switzerland where he sampled world-class cheeses, decided to turn Di Bruno Bros. into the “House of Cheese,” selling the products he had fallen in love with and that couldn’t be found at the large supermarkets. Through the brothers’ relationships abroad, Philadelphians could now purchase Havarti, Jarlsberg, Emmentaler Swiss, Red Wax Gouda, Monterey Jack, smoked gouda, Pepper Jack, and the newly popular, Brie. Had the customers ever heard of these then “exotic” cheeses?  For the most part, no. But the brothers could sell them with “a sample, a good story and a smile.”

And it didn’t stop with cheese.

True Italian prosciutto wasn’t readily available in the US until the early 1990s, but it could be found in Canada as early as the 70s thanks to Italian immigrants that were opening up facilities to cure meats. This was a better product than the saltier, domestic prosciutto, and Danny and Joe jumped at the chance to introduce it to their customers. Soon, the store became so packed with products that staff behind the counter had to duck beneath a lineup of hanging salami to hand customers their grocery bags.

Speaking of staff, Danny and Joe weren’t without help. Meet the Di Bruno team lovingly known as “The Aunts and Uncles,” (even by non-relatives). Aunt Edith, Aunt Rita, Aunt Angie, and Aunt Cecile, all worked tirelessly to make the antipasti, the salads and the spreads. Uncle Dommo (Domenic) kept the shelves (and even the ceiling) fully stocked. The famed Joe Bruzz (short for Abbruzzo) was quite the charmer.  People would line up to be waited on by him. And they were a thrill for the younger generation working in the store to be around, setting the tone for the warm, hospitable atmosphere we have come to be known for.

The Aunts and Uncles also added a spark of innovation to the business. As time went on, the aunts noticed that jars of cherry peppers were sitting on the shelves longer than other products. One day, Aunt Edith and Aunt Angie took aged little chopped ends of provolone, wrapped it with prosciutto, stuffed it inside the pepper and put it back in the brine so that the cheese would soften. The Di Bruno Bros. versions of the “Pepper Shooters” were born, and they remain one of Di Bruno Bros. bestsellers.

“They just wanted to feed you and make you feel good,” Di Bruno Bros. current owner and third-generation family member, Emilio, recalls of the aunts. “And they were miracle workers. Who else do you know that can make a brie and tomato sandwich out of half a roll and feed twelve people?” he says of Aunt Cecile. Since the beginning, Di Bruno has been the go-to place for good food and good people.

By the 1980s Danny and Joe and their growing staff had become known as culinary experts, often consulted by some of Philadelphia’s great chefs, food writers, TV show culinary spotlights, and The Philadelphia Inquirer‘s much touted Sunday Newspaper Food Section for information on new and classic cheeses and specialty foods. Aided by the Aunts and Uncles, they continued to experiment with new products—imported and homemade, like the cheese spreads made by hand upstairs. And the 40-year-old business prospered. 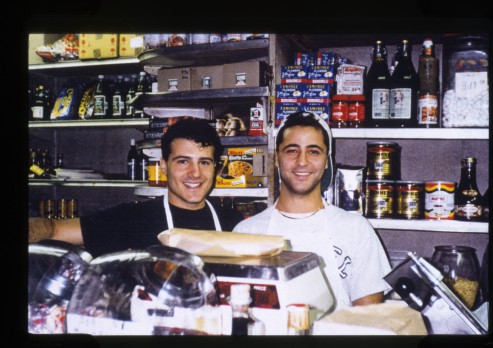 Which brings us to 1990 and the family meeting.  Of course Danny and Joe were thrilled to see their younger generation eager to keep the family business alive. They knew that with Bill Jr.’s degree in business, Billy’s degree in finance, Emilio’s degree in culinary arts, an understanding of the city’s restaurant scene and a little guidance from Danny and Joe, the business would not only survive, but thrive. So the next generation got the keys to the store.

By networking and expanding relationships both locally and internationally, the young cousins continued to expand Di Bruno Bros. offerings. Emilio’s culinary friends (who just happened to be some of the city’s best chefs) would visit the store, always amazed by the quality and selection. Encouraged by the chefs’ interest, Di Bruno Bros. added a wholesale and importing operation to serve restaurants and other specialty retailers. They didn’t limit their discoveries to one specific country. As a result, the shelves became stocked with international products from all around the world. 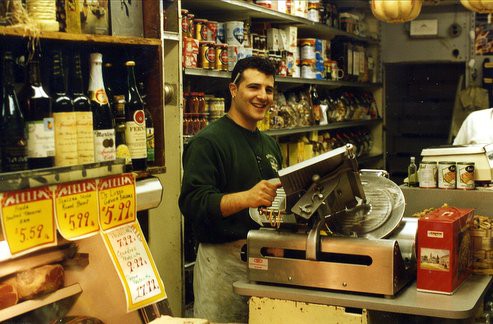 “No matter what we sell, we have to love it and believe in it,” says Emilio. “Our aunts would never feed us something they didn’t think was delicious. And it has to be exciting too. We want our customers to feel the same sense of discovery that we do when we’re out searching for these products.”

And that you will! Ask for a delicious Gouda and you will learn about Jan Dirk van der Voort of Holland and his mission to make Remeker Gouda the same way it was made in the 1600s. Aged for at least 18 months, Olde Remeker has a firm bite, and a nutty taste with hints of caramel. Craving an incredible Parmigiano Reggiano? You’ll hear all about artisanal cheese mastermind Giorgio Cravero, and you’ll taste the difference in his product. Cravero Parmigiano Reggiano has layers of fruitiness with a long, sharp flavor. 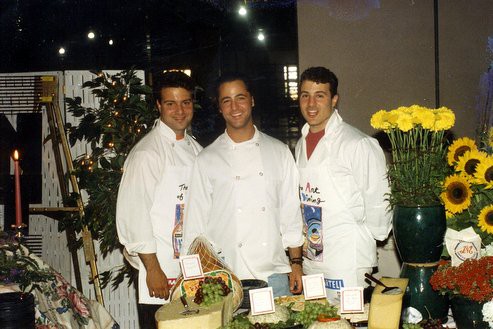 In 1993, the revitalized Di Bruno Bros. business received an extra boost from a very unlikely source—a nationally televised network dedicated solely to food.  From its first airing, The Food Network brought exotic ingredients into people’s homes, and in turn, people began cooking more adventurous meals. “It was exciting,” recalls Di Bruno Bros. sales manager Dan Ferraiolo. “All of the sudden a chef on TV is cooking with pancetta and our customers are asking for it. We couldn’t give pancetta away before. ”

Riding this wave of culinary interest, with business booming on 9th Street, the cousins decided it was time to open a satellite Di Bruno Bros. near Rittenhouse Square, to better serve the hustle and bustle of Center City. A third store soon opened in the Comcast Center, followed by one on the Main Line and most recently in the Franklin Building on 9th Street in Washington Square West. Each embodies the pioneering spirit of the original store, with a hospitable staff eager to dazzle customers with tastes of the best products from around the world.

Seventy-five years of Di Bruno Bros. and a lot has changed—with five locations in the greater Philadelphia area, products shipping across the country, full-service catering with grand-scale events, and even more ambitious plans for the future.  However, one thing has remained and will always remain the same. We keep coming back to the table with family and friends. And we invite you to do the same. A Salute!

In the mood for another deliciously old school read?

Take a look at our story about 1939 and the story of Danny and Joe Di Bruno, “Superman, World War II, and a Little Shop on 9th Street” or follow our celebration on Twitter and Instagram at #DiBruno75.

my first trip to Di Bruno Bros. in 1978k was with my Sicilian friend, Rosa, who took me shop’n at the Italian market. she asked me if I liked cheese, and if I did, we’ll stop at one of her favorite stores before we leave; Rosa called the cheese place: Brunos. I asked her where it was located so I could go and see what Brunos had…..my Grandparents were from Goldau, Switzerland; they had a small cheese shop in the town and sold there own hand made cheeses and some of the bigger cheese from the Interlaken-Lucerne area. I made it to Brunos. wow and double wow, tho busy with people, I asked one of the counter ladies if it cost anything to stand around and just smell, she asked me if I was hungry, to which I said: Yes. in a couple minutes she brought me a sandwich…..triple wow. over the next few years, and before I moved form the Philly area, I made many visits to Brunos. I hope my favorite counter lady is still alive and maybe still handing out her favorite sandwiches with her provocative smile. .i’m 81, last April. the is no other store in the world like the one I visited with my friend Rosa. God bless your family. richard