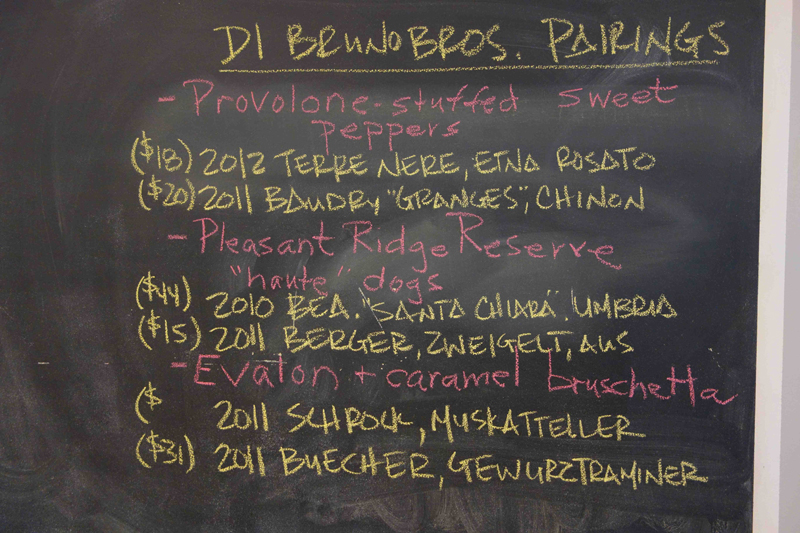 All my life I’ve avoided Provolone – to me, it’s always been a “meh” cheese, a bland, moonish slab that I associate with deli counters. Then I went on a book tour with Emilio Mignucci, Mr. Tastebuds of Di Bruno Bros., and wasn’t I surprised to learn that the ONE wedge Emilio always has in his home fridge is Grandé Aged Provolone?

“Seriously? Grandé Provolone – from Wisconsin?” I asked him. During the ten years I lived in that state, I don’t think I ever ate a slip of Provolone. In fact, I know I didn’t. So when Emilio and I planned a leg of our book tour in Madison this August, I knew that I had to give Grandé Provolone its due.

If you’ve ever meandered around Di Bruno Bros. and noticed bulbous 30-lb cheeses hanging from the ceiling by ropes, then you’ve seen traditional aged Provolone. Around the cheese counter, these giant dairy piñatas are known as “mandarini” – which refers to the Mandarin-orange-like shape.

Grandé, which was founded in the 1940s by a Sicilian named Filippo, still makes Provolone according to Italian tradition. Each cheese is hand-molded, slowly cured for a year or more, and gently smoked over apple wood. Ropes, which were once used to transport this cheese on horseback, are still used. Hanging this cheese serves another purpose, though, too.

Provolone starts as a very soft, moist cheese – it’s essentially aged mozzarella – and drying it on ropes allows it to air-cure into a nice shape. Try setting young Provolone on a shelf and it will age into a misshapen blob.

In Wisconsin, Emilio and I decided to throw a book party that would showcase Wisconsin cheeses. Grandé donated a whole aged Provolone, which required some serious fridge clearing at my brother’s house, where we planned to do party prep. Di Bruno Bros. cheesemonger Matt Shankle came over to break it down for us (should you ever find youself with a 30-lb Provolone: cut off its top, then slice it up like a melon).

My first taste of Grandé was unforgettable: it was milky sweet, almost wincingly sharp, and gorgeously smoky. Paired with a fruity red wine, it turned my idea of an ordinary “meh” cheese into something mahhhvelous.

Make sweet-pepper shooters. Simply tuck cubes of Grandé Aged Provolone into a Peppadew pepper, top it with a quarter-folded round of sopressata, and spike it with a toothpick.

Serve aged Provolone for dessert with fruit and nuts. On a cheese board, round out the muscular flavor of this cheese with red grapes, candied pecans, stone fruit, dried fruit, and a glass of Riesling.

Top a pizza or use it for grating. Since Provolone is very similar to mozzarella, you can use less cheese and create more flavor on a pizza. Its trace of smokiness is especially good with caramelized onions, pineapple, and Canadian bacon.