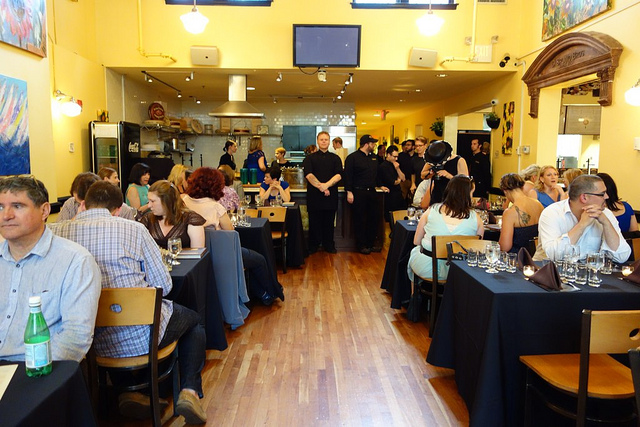 Behind the scenes at any cheese counter, there are rockstars – cheeses with fan clubs, particularly among the staff. I’m talking about cheeses that inspire tattoos, baby names, pilgrimages, and the like.

Back in June, Di Bruno Bros. celebrated 5 cheeses that rock the house. The Di Bruno chefs created a special dinner to highlight these dream wheels, and the staff rolled out the red carpet for the producers of each wheel.

It was an international cast.

Betty Koster flew in from Holland to wax poetic about her Gouda. Jamie Montgomery slid in with the smell of Somerset still on him – and expounded on clothbound Cheddar, his love of mac’n cheese, and his fondness for bowling (he even challenged the cheesemongers to a game).

Phillipe Goux, who ages the world’s best Comté, signed the pages of our new cheese book, as did Giorgio Cravero (a.k.a. Mr. Parm). Even José Luis Martín, who didn’t speak much English, managed to convey the importance of “grass” when he spoke about his cows that produce milk for his 1605 Manchego – easily one of the butteriest cheeses on the planet.

In case you’re looking for a new idol, here is a list of the “rockstar cheeses” from that special night. Try them one hunk at a time, or serve all five on a board for an earth-shattering stage experience.

Marcel Petit Comté
Aged inside an old stone military fort in the Franche-Comté region of France, Marcel Petit Comté is legendary for its depth of flavor. Wheels vary depending on the season and Phillipe Goux, who matures these giants, is a master of his art. He can tell you what season the animals were milked and exactly which pastures they grazed – just by tasting a core sample.

At home: Serve Marcel Comté with fresh or dried stone fruit, nuts, and saucisson sec. Or melt it on a grilled sandwich with ham and onion jam.

1605 Manchego
The world is full of Manchego, but few are as nuanced as this artisan version made by José Luis Martín, using the grass-fed milk of his La Mancha ewes. You will taste butter, herbs, Brazil nuts, perhaps even a twinge of bark – all subtly balanced.

On the patio: Make like the Spanish and serve 1605 Manchego with quince paste and Marcona almonds. Or, grab some plump green olives and a variety of cured meats.

Montgomery’s Cheddar
The world’s most decorated Cheddar is rooted in tradition. James Montgomery uses the best raw milk from his family farm, then mummifies his “drums” of cheese in cloth and smears them with lard. After twelve to eighteen months in the cave, these cylinders are earthy and sweet, sometimes streaked with a bit of rogue blue-ing (blue veins).

On a special night: Make the mac’n cheese of your dreams – that’s what Chef James of Di Bruno Bros. did, then stuffed the lot into a homemade pretzel roll for a Philly flourish. Or, just eat a hunk of Montgomery’s straight; apple slices, chutney, and walnuts pair nicely alongside.

Cravero Parmigiano Reggiano
The Cravero family has been in the Parm business for five generations, and today they are best known for selecting the best wheels from small farms in the Parmigiano DOP area and aging them at their stone facility in Bra. Following traditional methods, the Craveros eschew refrigeration, relying on winter temperatures in their native Piedmont to create deeply crystallized cheeses with maximum sweetness.

For a picnic: Serve Cravero Parm with a drizzle of light-colored honey or aged balsamic vinegar; fresh apricots are a nice side. Giorgio always serves his Parm with Prosecco.

L’Amuse Gouda
Betty Koster’s spectacular aged Gouda melts in your mouth like toffee. Dense and crystallized, these darkly golden wheels are hand-selected from around Holland by Betty and her husband, Martin, then aged at higher than usual temperatures to render a sweeter paste.