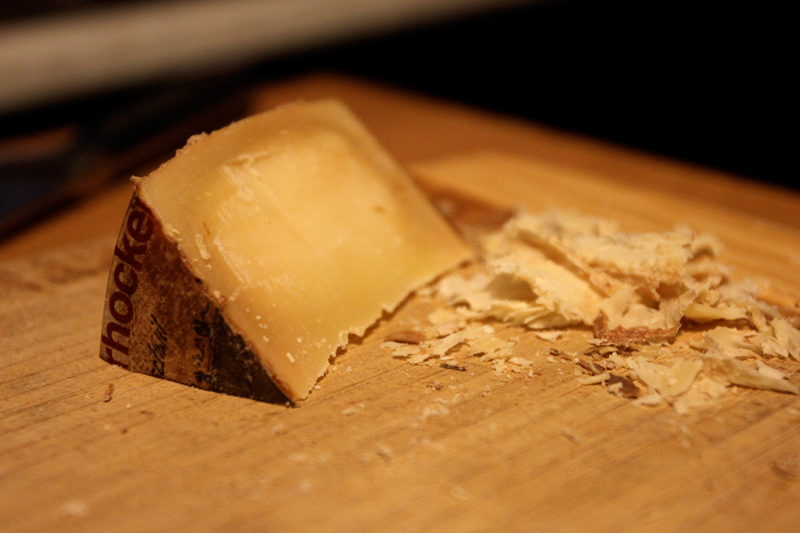 It is always disappointing when a customer tells us that they purchased “too much” cheese their last time in and had to throw some away. This stings, both because the customer feels that they threw some money down the drain, and also because a small piece of an artisan’s efforts have gone for naught.

When should you throw moldy cheese away?
Now, if you have purchased a soft cheese, something in the vein of Brie, triple cream or fresh goat cheese, any mold growth likely means that the entire wedge is past prime and should be discarded.

Likewise for any aged cheese that has grown black mold. This can be a hazard to your health, and while removing it would most likely resolve the issue, there is no sense taking the risk.

When should you save your moldy cheese?
If you have a hard cheese that has been in the fridge a bit too long and has developed mold of any other color (white, grey, blue and green are common), it is salvageable! Take a look at this piece of Challerhocker, which I let sit on the counter for a few days to turn gnarly. Some white and grey mold, as well as discoloration beneath the rind. Not pretty.

Simply take a butter knife and scrape it against the cheese, shaving the thinnest of layers off the outside, removing the mold (see pic). It is clear that this cheese is no longer fit for a cheese plate, as evidenced by the dark and dry layer just beneath the rind. I would not serve this to guests, but it will still be sublime when melted.

Grate(d) cheese additions
Trim off the rind and grate the whole thing down. Look at that pile of shredded delight! You were going to throw that out?

From here, you can do many things with it. Soups, chilis or cheesy sauces would all benefit greatly from a handful of grated cheese.

However, when using up end pieces, which tend to be a bit more potent than fresh cheese, I like to temper it with starches. Think pasta (either grated on Penne or melted into a Mac and Cheese), potato skins with bacon, or, as is the case tonight, atop Russian onion bread and set under the broiler.

This makes a great, simple snack, or a wow-factor side to homemade chili. However you use it, it sure beats throwing it away.

Ohhhh I’m thinking about all the cheese I’ve thrown away!!! Thank you!

Delightful, and useful knowledge. Did I say delicious? That too!

Damn I want to see your pantry!

Awesome, Hunter! Nobody delivers the 411 on mold the way you do.