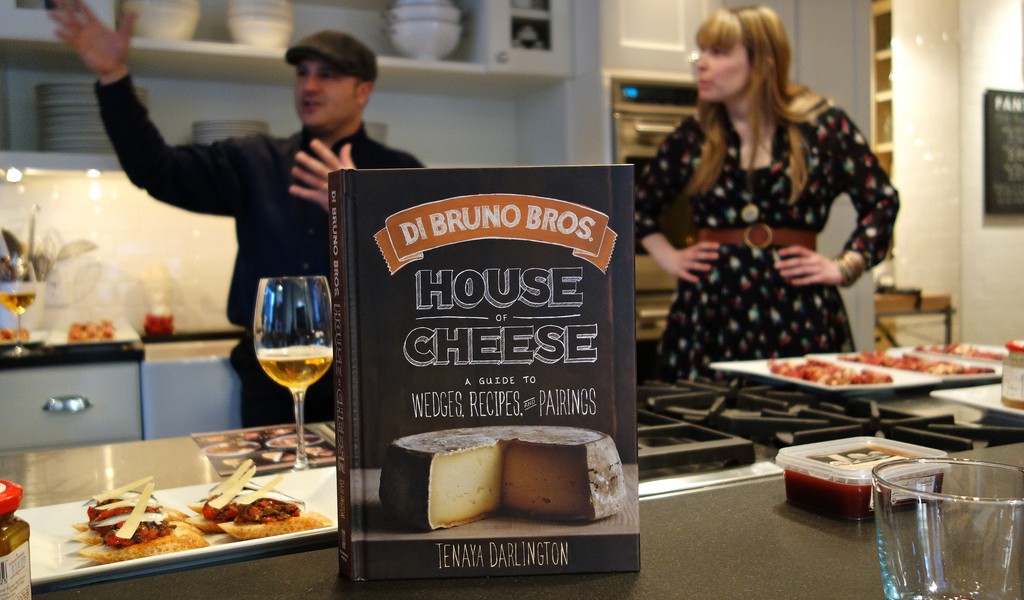 Just before the leaves opened, Gene Muller popped the top off summer when he poured a round of his Flying Fish Summer Ale at COOK last Friday night. Emilio Mignucci handed him a pairing: gold and silver crostini. If you’ve never paired boquerones (Spanish anchovies) with Parmigiano Reggiano, try stacking them on a baguette round along with a heap of roasted red peppers plumped with a little tomato vinegar. Sweet and briny, it’s an open-faced coastline, all sun and sea.

Why does this combo jive so well with a light session beer? “In Italy, people drink Prosessco with Parm, and Gene’s summer ale reminded me of that,” Emilio explained to the dozen or so diners seated around COOK’s kitchen island. “One night, we were stitting around the shop at 9th Street sampling this beer, and it reminded me of drinking Prosecco with Giorgio Cravero who ages our Parm – so we came up with this little bite.”

All evening long, little bites appeared – prepared by Emilio and Di Bruno Bros. cheesemonger Rocco Rainone. Half the pleasure of dining at COOK, Philadelphia’s premier dinner-as-theater experience, is watching chefs work the kitchen. And anyone close to Emilio knows he is a performer, in the best sense. A gifted storyteller.

For every pinch of fennel pollen, for every drizzle of dulce de leche, Emilio provided background about the maker – and sometimes – divulged a thing or two about his own fridge. Have you ever wondered what the fridge of a Mignucci – a third generation Di Bruno – looks like? I won’t reveal what I know now about Kraft Singles, but I will tell you that Emilio keeps two open jars of dulce de leche on hand at all times. You’ll have to ask him why.

COOK is the kind of place where a professional kitchen turns into a back porch – drinks appear, appetizers emerge, and before the night is through you’re slapping your thigh. Along the way, you learn something about cooking, and – in this case – pairing cheese and beer.

A couple recipes from the evening will be in your hands soon – the Di Bruno Bros. House of Cheese book comes out in just three weeks! Until then, you’ll have to wing it as you crack open your first Hopfish, your first Exit 16 (made with wild rice, and just glorious!). As I read through my hasty tasting notes, a few favorites jumped out. I am writing them here for you – but also to commit them to memory myself, as a summer mantra.

Red Fish – a dry, hoppy doozy that pairs well with meaty flavors, like sausage, and funky cheeses. Emilio and Rocco cooked up an open-faced “Oreo” out of Pan di Stella (a chocolate cookie), topped with a wedge of goaty Pata Cabra and a scant teaspoon of crab apple mostarda. Far out and fantastic. My fave nibble of the night.

Flying Fish Dubbel – this molasses bomb paired perfectly with salty surryano ham and dulce de leche, a combo that Emilio and Rocco referred to as “The Country Breakfast.” This Dubbel is going to be my new bbq tonic. I can’t wait to crack it open with a kielbasa and a plate of powerful cheeses.

Flying Fish Exit 4 – Emilio mentioned the tropical fruit notes in this beer, and right away I smelled mango. What a great beer to pair with jerk chicken or pork! It was the perfect foil to “The Smelly Cannelloni” bite that Rocco and Emilio put out near the end of the night: a sheet of brasaola wrapped around a funky hunk of Ardrahan and a slip of ghost pepper doused with Blis Maple Syrup.

Note: Keep your eye out for the class schedule at COOK. Emilio and I team up to teach our first Cheese 101 class on Saturday, April 22, at 4 p.m. Bring your shnozzes!