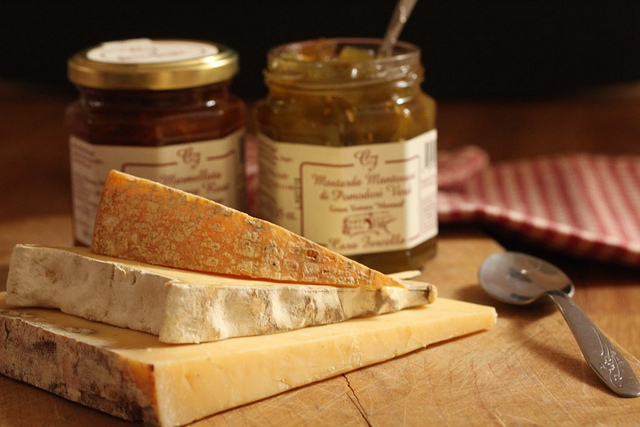 One of my great disappointments in watching Downton Abbey is that British cheese never appears at the family table. All those sumptuous puddings, and yet never a spot of Cheddar? Certainly Lord Grantham must fancy a good clothbound now and again?

March brings the Flower Show to Philadelphia, and with this year’s “British Landscapes” it seems only proper to offer you a selection of Britain’s best wedges. Should you overdose on the smell of hyacinths, you may wish to pop into Di Bruno Bros. for a sniff and nibble. (Di Bruno Bros. will be a vendor at the show, but the flagship store at 18th and Chestnut is within walking distance.)

Made from sheep’s milk, this royal beauty is distinguished by its reptilian rind (thanks to a kitchen colander that’s used for draining). If you forget its name at the cheese counter, ask for “the sheep’s milk cheese that looks like a crocodile purse.”

Berkswell is made at a country house called Ram Hall, near the village of Berkswell, in the West Midlands. To me, its flavor often suggests Jordan almonds – it’s sweet, nutty, and very smooth. Green tomato mostarda (see pairing note below) is outstanding alongside.

Several years ago, I called this “the turducken” of cheese in one of my posts. It stuck, and every time I see this old bird in the shop, I have to stop and admire its triple-layered plumage. Try eating the rind, then the creamy layer beneath it, followed by a bite of the crumbly center – it really is three cheeses in one.

The wives of Welsh miners popularized Caerphilly, believing it contained restorative powers. It has a mushroomy, cabbagey quality that can be quite seductive, especially if you enjoy earthy flavors – or a hearty hunk alongside a bowl of broth. A touch of bitter marmalade serves it well.

No Anglophile should go to the grave without a taste of true artisan Cheddar. A quick Google will pull up countless accolades for Britain’s best-loved version, from James Montgomery of Somerset. He uses raw, grass-fed milk and wraps his wheels in muslin to retain moisture, just as farmhouse Cheddar was made once upon a time.

Monty’s – as this is called behind the counter – is sweetly complex, a bit musty near the rind, and full of unfolding flavors that sweep from hay to brown butter. Montgomery’s Cheddar is a British landscape. Suck on it like a lozenge and you may see heaths arise before you. Blood orange marmalade is delicious alongside, but the first bite is best unadorned.

Mostarda, Marmalade, and Other Pairing Ideas

Add a pot of Earl Gray or a few pints of ale to these cheeses, and you’ve got a rich feast on your hands. Walnuts pair well, so do apples, smoked ham, whole grain bread, and dried fruit. Blood orange marmalade and green-tomato mostarda from Casa Forcello – two new products on Di Bruno shelves – are outstanding sides! If you only pick one, choose the green-tomato mostarda. Its whip-snap of mustardy heat on the finish refreshes your palate.

Note: On a recent night, I invited friends to bring over a sampling of British beers to sip with this cheese board, and we were most impressed by Belhaven’s Twisted Thistle IPA. It paired well with all three cheeses, and it appeased two gentlemen in the crowd who professed to despise hoppy beer.