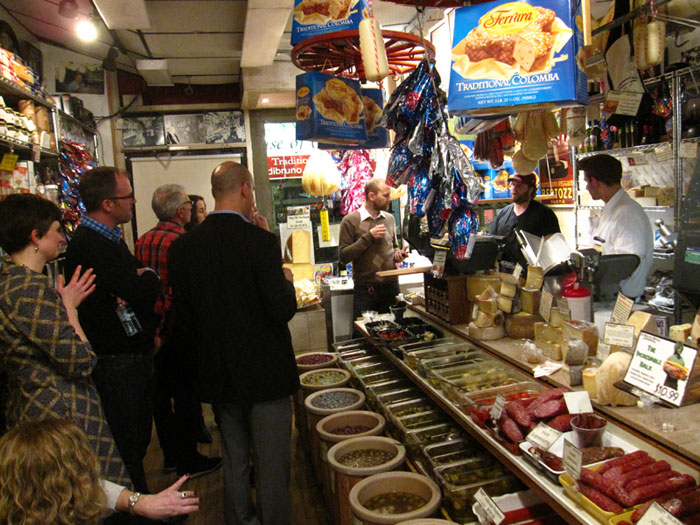 Two weeks ago, I had the opportunity to stick around Di Bruno Bros. on 9th Street for an after hours party. It’s what the store likes to call “a private shopping experience” – a chance for customers to linger around the olive bins, eating pairings that cheesemongers dream up.

There were rolls of Kobe roast beef wrapped around truffle cream, followed by artisan goat cheese drizzled with chestnut honey. Along the way, guests nibbled antipasti while a pair of cheesemongers whipped up salami ravioli and sliced into their favorite off-the-menu sandwich – a hoagie that cures for three days in the fridge.

Here’s why this was such an amazing night: it was a chance to graze around the store, tasting things I usually overlook. And it was a chance for Rocco Rainone and Zeke Ferguson, two cheesemongers who love to cook, to show off what they call “snacks from the mind’s mouth.”

As Rocco explained, a cheesemonger’s “mind’s mouth” is essentially his food imagination. “Think about it, we spend all day looking at these shelves,” Rocco said, extending a hand toward a row of olive oils, “so we’re always inventing new combinations.”

One of the most interesting snacks we tried after hours was a chopped salad of Roman artichokes, grated dark chocolate, and Cremifacto Verde Capra (a creamy blue cheese made from goat’s milk). It was a recipe designed by Ian Peacock, a cheesmonger “famous for his mind’s mouth,” according to Rocco.

Blue cheese with artichokes and dark chocolate? It sounds ghastly, but somehow it proved magical: the blue cheese turned creamy and took off the acidic edge of the artichoke marinade, and the chocolate flecks added an earthy twinge. Our party gobbled it down, returning for seconds, even thirds.

If you’re casting about for a party idea or if you’re interested in learning more about cheese pairings and charcuterie, consider booking an after hour shopping party at Di Bruno Bros. It’s a great alternative space to host a wedding shower, a reunion, a networking event, or even a special anniversary.

Here’s what you need to know:

Call it a cheese lock-in.

To book an After Hours Shopping Experience at Di Bruno Bros. on 9th Street, call 215-922-2876. Parties can be tailored to large groups (up to 40) or intimate gatherings. Please book well in advance for holidays and weekends.

Spoke to Rocco last night at McCrossens Tavern and he busted me. I only read part of this article and didn’t realize that I could have my very own cheese after party! This is definitely up my alley. I am grinning as I type this, thinking of who I will bring.

[…] Here’s why this was such an amazing night: it was a chance to graze around the store, tasting things I usually overlook. And it was a chance for Rocco Rainone and Zeke Ferguson, two cheesemongers who love to cook, to show off what they call “snacks from the mind’s mouth.”  To continue reading, please click here. […]