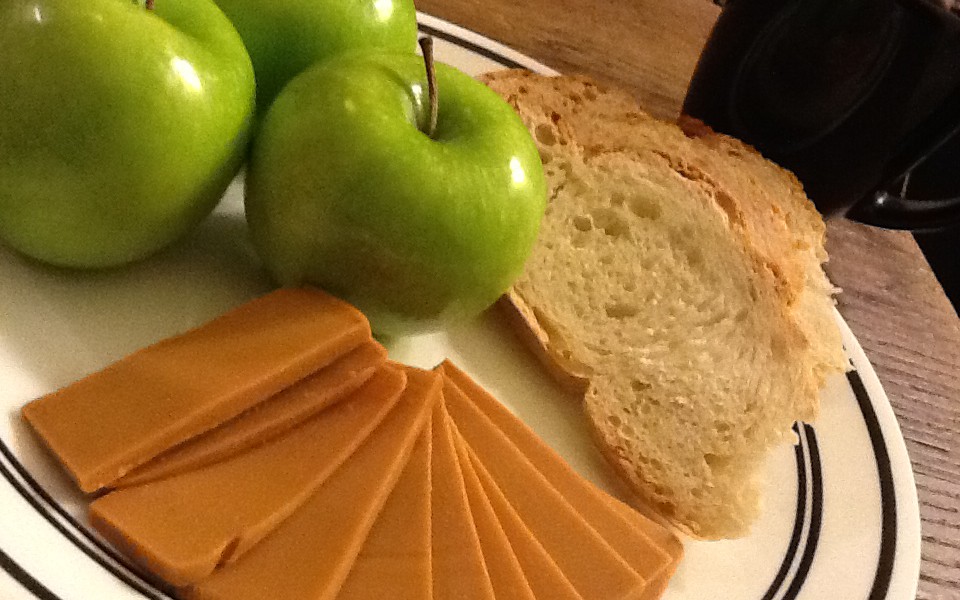 As far as I’m concerned, cheese and coffee make up their own food groups. The dynamic flavors and chemistries attainable by both of these items allow for thousands of different possibilities. I’ve had a long-term relationship with coffee for a few years now, while cheese is a slightly newer affair (luckily coffee hadn’t caught wind of it). Leading up to this past weekend, I decided it was time to introduce coffee to my mistress.

To make sure the meeting went as well as possible, I wanted to start with the best version of my long-term lover. To do this, I wanted to control every aspect, so I headed down to Fante’s in the Italian Market to buy some unroasted coffee beans. I decided on a Brazilian bean, mainly for the price – for under $7 a pound, I really couldn’t complain.

Roasting coffee beans is not a difficult process; the secret is low heat and lots of movement. I usually just use a large frying pan and a wooden spatula, keeping the heat on low and constantly pushing the beans around the pan so they do not burn. At first, the beans won’t do anything and you might be compelled to raise the heat, but don’t touch it. Be patient, the process can take 20 to 30 minutes to really bring the beans to a nice dark roast.

The final product is definitely worth the extra effort. Coffee hits its peak flavor 24 hours after roasting, when the chemistry inside the bean has truly set. After shaking the husks off the roasted beans, I like to keep them in a brown paper bag until I am ready put them into action.

Now, Norwegians do a few things right, including fjords (fancy cliffs), black metal (not a fan), and Vikings (long journeys, cool swords), but one of the best cultural influences Norway has bestowed upon the cheese counter is Gjetost. A goat-milk cheese that has been cut with a bit of cow’s milk, this sweet cheese retains a bit of the tang from the capric acid found in goat’s milk, while the flavor kicks off with the sweetness of caramel. Described as the child of cheese and caramel, Gjetost goes well with almost anything you could imagine covered in the latter. I picked up some apples and a loaf of Faragalli’s Italian bread on my way out of work on Friday and started planning breakfast in my head.

The morning after roasting the beans I woke up and shuffled down the hall like one of the living dead to my kitchen. After putting water on the stove to boil, I found my beans from the night before, oddly not where I remembered putting them, and ground them up for a pour over coffee. After locating my dripper, pitcher, and filters (the three essential “er’s”), I started pouring my java.

The first sip of coffee brought me to, and I was able to dice a few tiny, tart green apples. Feeling a little bit better I threw a pad of butter in a hot pan and placed my apples in to sauté. When the apples warmed, I spooned some honey over the entire operation. The bread, after a quick heat in the oven, nearly sliced itself, and an aroma fell across my kitchen and living room that was reminiscent of Italian bakeries. A few thin slices of Norwegian gold (Gjetost) with a spoonful of apples and I was on my way to, well, enjoying a really nice breakfast before going back to sleep. What? It was Saturday.

In all seriousness, the cheese melted in my mouth while the sweetness of that plus the honey played nicely with the tartness of the acid in both the apples and the cheese. The bread, intended simply to be the vehicle to get breakfast to my mouth, incorporated itself so well I ended up considering it as vital a component as the Gjetost the bread was bought to hold. All in all, the breakfast was fantastic, and I was able to simultaneously enjoy coffee and cheese at the same time. My goals reached, I really did go back to sleep, only to dream of new combinations of my two lovers: cheese and coffee.

Mmmm I’m not a huge blog reader, but your post came up after I decided to look up “coffee and brunost” after enjoying the combo for my breakfast.

What a great read! Loved the “went back to sleep “ bit, specifically because I’m overcoming burnout and stress-addiction, and so personally getting therapy to be able to take self care and rest.

Sounds absolutely delicious! I can’t wait to try it. I haven’t had luck finding Gjetost in any stores near me but I’ve founds a great website that sells it . I buy it from https://www.gourmet-food.com/norwegian-cheese/gjetost-cheese-100414.aspx . They have good prices and great quality cheese.

Home roasted coffee and little caramel-apple bruschetta for breakfast! I like how you think. This looks like a lovely combination. I love the idea of warming the apples so that the goat cheese melts. Delightful.