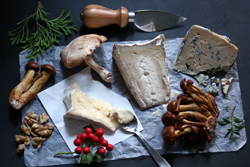 Ever since I read Michael Pollan’s Omnivore’s Dilemma, I’ve had a yen to forage for mushrooms. In gritty Philadelphia, it’s a lot easier to pop down to a farmers’ market and simply buy them from a local grower since nearby Kennett Square is a fungi hub.

Recently, I did some mushroom sleuthing at Di Bruno Bros. in order to build a Thanksgiving tribute to my two favorite foods: fromage et champignons. My dream: a cheese board that would remind me of walking in a forest.

To begin, I wanted a luxurious Brie with an earthy finish. A monger at Di Bruno Bros. waved a fresh wheel of Brie de Meaux, which is one of two name-protected Bries made in France. This is important to understand: any yokel can make Brie, which is why so many supermarket wheels taste like rubber tires. Brie de Meaux has a special designation by the French government to ensure quality. This is a pasteurized Brie, but on a good day it tastes like garlicky sautéed mushrooms.

For my second selection, I had my eye on Truffle Tremor from Cypress Grove in California. Picture a savory chevre cheesecake with flecks of black truffle. One of my friends says that eating this cheese is like kissing a man with stubble – all I can say is, it’s sensual. The truffle flavor is subtle; it nuzzles the goat cheese without overpowering it. Like its sister cheese, Humboldt Fog, Truffle Tremor is beloved for its gooey cream line just below the rind and for its chalky center. Texturally, it’s an opus.

Finally, a blue. Where to begin? A number of blue cheeses share mushroomy notes, but I wanted a subtle beast, a blue that wouldn’t overpower the other cheeses on the plate. La Peral, from northern Spain, is a bit of a contortionist. This creamy cow’s milk cheese starts out sweet – think white chocolate – then finishes softly with a savory, shroomy aftertaste. Very unexpected. Absolutely gorgeous.

A cheese plate this subtle doesn’t need a lot of accompaniments. Find a yeasty Champagne, then sauté some local mushrooms and a clove or two of minced garlic in a pat of butter. Add a pinch of sea salt and toss these in a bowl with a spoon. Let your guests decide if they want to eat the cheeses with the mushrooms or separately. Just remember to let the cheeses reach room temperature before you serve them.

Appetizer tip: For a divine first course, toast some baguette rounds or whole wheat bread, spread each toasted slice with Brie de Meaux, then crown each round with sautéed mushrooms and a sprinkle of fresh chives. The combination is unearthly, a forager’s daydream.

Thanks for the kind words, Hunter. Actually, I loved the combination above — Shiitakes and honey mushrooms. The latter are very silky and juicy, so they pop in your mouth.

“Texturally, its an opus.” – Technically, your writing is an opus. What is your favorite variety of mushroom for pairing with cheeses?

Love this! If you ever do meet someone who wants to whisk you into the woods for mushrooms, I’d come as a chaperone! I’m determined to forage next year.