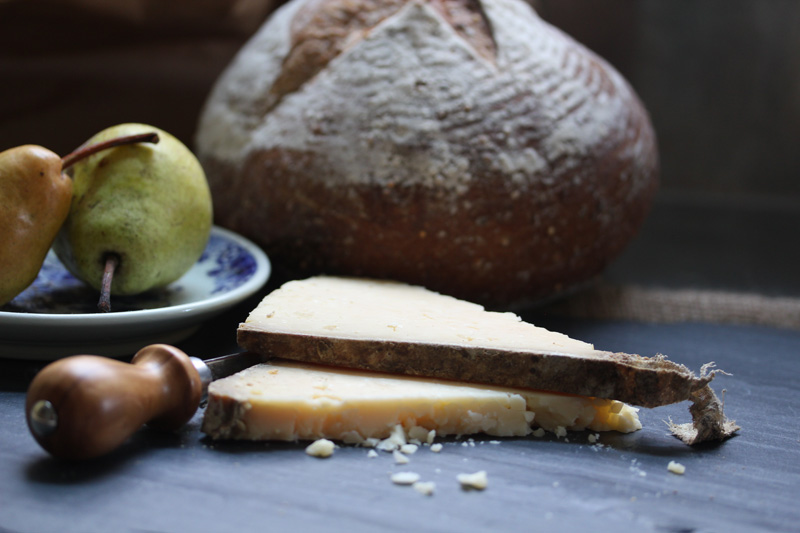 I love the smell of Cabot Clothbound Cheddar – it smells like the woods in fall. Like sweet soil and apple trees, with a hint of woodfire wafting above the limbs. It’s the kind of cheese you should eat in a leaf pile, sliver by sliver, with a pocket knife. Take a hunk of hearty bread and a pocket flask, and you’ll never want to return from the wilds.

In America, Cabot Clothbound Cheddar is perhaps our most distinct take-off on this Old World British cheese. It looks similar to Montgomery’s or Keen’s – two U.K. mainstays of the clothbound world — but Cabot’s has a uniquely Vermont profile. Imagine a sweet, sharp cheddar cross-bred with a caramely Parm and a nutty Gruyere. It’s the Labradoodle of the cheese world.

So, what is clothbound cheddar? Typically, it’s a pressed cow’s milk cheese that is wrapped in cheesecloth, sealed with lard, and aged in a cave. The process was invented in England as a way to create moist, creamy cheddar with deep flavor. In the last decade, a handful of artisan cheesemakers in the U.S. have adopted this traditional method, and as a genre – or, let’s say, as a breed – these bandaged cheeses tend to be wildly interesting.

If you’re a cheddar fiend, you may have bought Cabot’s cheddar at the grocery, probably in block form. This isn’t the same thing as the clothbound variety; it’s made from the same milk (Cabot is a farmer-owned cooperative with 1,200 dairies across the state of Vermont), but it’s not aged the same way.

Cabot Clothbound is aged in the Cellars at Jasper Hill, an extensive aging cave in Greensboro, VT that was designed by two cheese-loving brothers, Andy and Mateo Kehler, in 2003. They have seven vaults that run like underground honeycomb beneath the cow pastures of their Ayrshire herd. Part of what makes Cabot Clothbound so stunning is this collaboration — great Vermont milk, carefully aged under Vermont soil.

Jasper Hill produces its own line of stunning cheeses, which are also worth trying this time of year. If you want to celebrate fall, consider putting together a cheese plate of Jasper Hill cheeses or try a clothbound cheddar tasting: