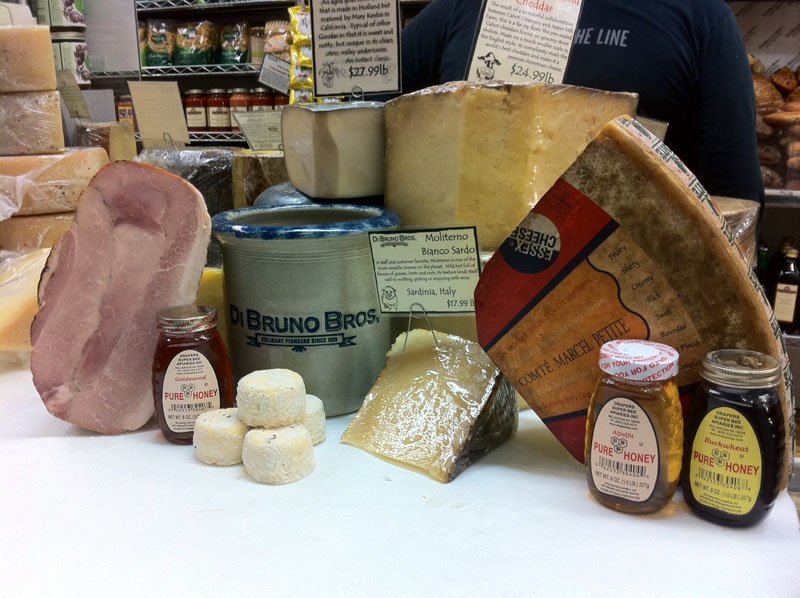 Aside from my annual 5 or 6 cannollis from Isgro’s during the Italian Market festival and the occasional Reese’s peanut butter cup (my weakness) I really don’t have much of a sweet tooth. The one area that I stray from my general malaise with sweets is honey. For tea when I have a sore throat, for hot toddies when I pretend to have a sore throat, for making my own mead, and especially for drizzling on any variety of awesome cheeses.

I decided to honor this ancient sweetener the other night by basing dinner around it. I picked three cheeses and a meat that all go great with honey, in no particular order they were:

The honey was a locally sourced Buckwheat honey from Draper’s Apiaries. If you haven’t had buckwheat honey, it is a little like the Tim Burton or Marc Caro of the honey world, not as well known or appreciated as some others, a bit darker and a bit more complex. Buckwheat honey has a rich almost molasses-y quality that is interestingly sweet and bitter at the same time. A good loaf of bread was the vehicle for the soft crottin and the honey, but the hard cheeses and the ham could just be dipped directly in the honey and then be judiciously shoved in my mouth!

One great fact about honey that a lot of people don’t realize is that, IT NEVER GOES BAD, EVER. So even though I ate about 3/4 of that jar, I could save the rest of it for my grandkids. Honey is experiencing a renaissance in the world of American foods; it is as natural a food as you can get and has never been processed or made with high fructose corn syrup. It’s widely available, relatively cheap and useful in about a million applications. We have approximately 15 different varieties at Di Bruno Bros., they all have their own unique charm and you’re invited to stop in and try them all!

Intriguining. I’ve never put buckwheat honey with any of these. I’ll have to give it a try. I’m curious about Acacia honey, especially with Pecorino. Ever tried the combination?

i love this Zeke. honey is one of my addictions.

mmmmm good idea! haven’t tried buckwheat honey…but i want to now! and i like that you’re planning ahead for your grandkids 🙂