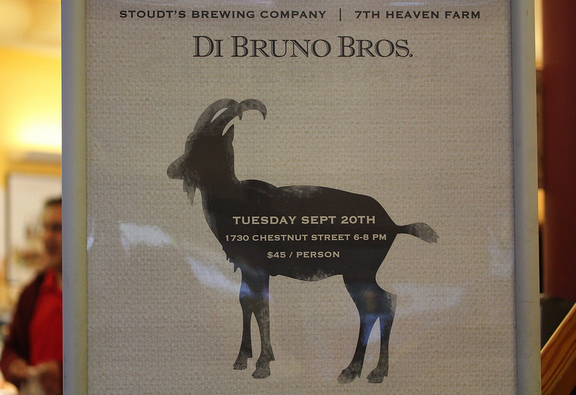 It’s not often that you get a farmer, a brewer, a chef, and a cheesemonger to join together for dinner. The farmer has her animals to milk in the evenings. The brewer has beers to pour. The chef usually stays in the kitchen, and the cheesemonger…well, you know where he’d rather be. In the cave, of course.

That’s why Tuesday’s goat dinner at Di Bruno Bros. was a special night. Farmer Carla Growney of Seventh Heaven Farm drove over from Tabernacle, N.J. with two of her goats. Brewer Jodi Stoudt of Stoudt’s Brewing arrived with cases of beer. And Chef Rob Sidor created a snout-to-tail dinner that included everything from goat heart chips with caramelized onion to sausage-stuffed goat heads.

Back at the cheese table, Melanie Fortino (a.k.a. Cheese Cave Team Leader) danced jigs around a rainbow of chevre, from slivers of Pantaleo to rich goat blue cheese. If you’ve never eaten a soup-spoonful of Verde Capra before, you will never want to eat it any other way.

“It’s important as Americans to understand where our food comes from,” Emilio Mignucci told the crowd. Mignucci, a third-generation Di Bruno, talked about how his grandparents treated their store like a living room, inviting customers to become family and to learn about new products. “They would have loved a dinner like this,” he said.

Jodi Stoudt recalled her first visit to Di Bruno Bros., where she “ate about twenty-five samples and didn’t buy anything.” She let a big laugh rip, adding, “Then I came in a week later and spent like two-hundred-and-seventy-five dollars.”

Meanwhile, the farmer circulated, checking out the goat tongue salad and eyeing the goat bacon served with violet mustard. She was a long way from Tabernacle, NJ where she raises grass-fed heritage breeds, like Babydoll Sheep and Belted Galloway Cattle – faraway dreams for the men in ties and girls in high boots who stood around, licking their plates clean.

Look for Di Bruno’s next collaboration dinner, with Joe Sixpack, on Dec. 1. For reservations, email catering@dibruno.com or call 215-665-1659.