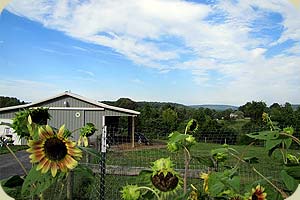 I headed out to Chester County to visit two new cheese makers at a farm Di Bruno’s has been working with for almost two years.  Amazing Acres goat Dairy was the project of Cheese Maker Debbie Mikulak and Farm Manager Fred Bloom.  They made a variety of delicious fresh and soft ripened cheeses from their flock of Nubian Goats. We loved them, as did a lot of other people, and the demands the farm proved to be quite a bit to handle as new customers continued to emerge, requiring more cheese and more goats to care for to keep up with demand.

Debbie and Fred chose to retire to Maine, but first they wanted to find someone who would continue Amazing Acres work…someone who wanted to continue producing the cheeses they had worked to develop; from the creamy soft ripened Sea Smoke and Baby Bloomer to the Brandy soaked Banon.  Enter Will and Lynne Reid, a couple looking to enter the exciting world of cheese making but in need of a teacher.  After a period of training and shadowing Debbie and Fred, they were confident enough in their abilities to bring some samples to the shop.  Even by this early batch, I was confident Amazing Acres would be back, as good as ever.  Nevertheless, I headed out to Chester to check out their spotless make room and talk cheese (and a little about beer) with Will and Lynne Reid, all while getting to check out the same batch that was due to hit our stores this week.

Rich Morillo: What were you guys doing before this and how did you get started?
Will Reid: I was in the Internet advertising industry, doing nothing good for the world (laughs).  Lynne’s a graphic designer.
Lynne Reid: I’m currently a graphic designer and I’m planning on doing that for as long as I have to. I’m going to wake up at six in the morning, milk my goats, then go to my computer and do my graphic design work all day.
WR: We came up with the idea ten years ago at a cheese tasting class. We didn’t know much about cheeses. It seemed like a fun thing to do…
RM: Just knowing you liked cheese…
WR: Yeah. But it was great, because after that we began making Mozzarella and other cheeses just in our kitchen and we thought “wait, people do this for a living. We like to cook, we like to eat. WE can do this for a living. So for the past ten years we’ve been researching, looking for the right opportunity.
LR: We researched different animals and goats seemed like the most manageable and we liked goat cheese.  Cows….
RM: Eat a lot.
WR/LR: They’re too big.
WR: Goats are typically healthy; they’re relatively easy to care for. They’re intelligent. They like people.
RM: (motioning to the barn) These goats had a lot of personality, I really liked them.
WR: The connection to us and Debbie happened in a round about way.  Our neighbor heard about this woman out in Chester county who was selling her goat farm.  It had been on the market about six months at the time. We made an offer May 2nd.
RM: Really recently.
Jamie Png:  We were at PASA in February and we saw the signs up and asked Debbie. And she said “yeah, we’re retiring to Maine.”
WR: I can see that. It’s a lot of work. We spent four hours in the make room molding Chevre yesterday.
LR: That was a lot of fun yesterday.
WR: We’ve always liked cooking together so this is kind of an extension of that as far as I’m concerned.
WR: So back to buying the farm, she was selling the whole business and the house and preferred to do them all together. Which is one reason why this was such a great opportunity.  We knew we wanted to do this and we planned and saved but didn’t have a great idea how to turn our nest egg into a goat farm.  Debbie and I hit it off immediately and even before any paperwork was signed she was showing me how to make cheese and we did batches through June and July and as you know she took me down to meet you guys and some of the other buyers. She’s still my go to…
RM: She’d kind of guru-ing you?
WR: Yeah, if I have a question I can call her or email her. Which is nice, because again, I could be in a totally different situation where we wouldn’t have that safety net or wouldn’t have these proven recipes that people like. We did get very lucky, I really feel, lucky.

RM: What did the training consist of?
WR: It was very process based. A lot of cleaning and sanitizing and repetition. I would shadow her, then she would shadow me and tell me what to do. It’s not a complex process but it’s very precise.
RM: Was there ever the idea of cherry picking her recipes and saying we’ll use this but not these and change this other one. Or go with all new ones?
WR: Given that she had an established brand and a name that people know out here, we wanted to be very careful to retain that brand. We were buying her name and recipes, it’s kind of a respect thing.
RM: It was hers and she did a good job with it.
WR: She did an amazing job and it’s difficult for me to say “my” Baby Bloomer or “my” Sea Smoke, I’ve started saying ours, meaning mine and Debbie’s but it was hers first.
RM: It’s her baby
WR: It’s her Baby Bloomer

RM: When I last came out here, she had just started to make Baby Bloomer and there was still this question of whether it would be more like a Chabichou or whatever else and she came to this point – and I think that this is the cool thing about American cheese making – she just decided I’m going to let the cheese do what it wants to and we’ll see if it tastes good. It’s been really rich tasting for a goat’s cheese which surprises a lot of people. There’s this whole category of goat’s cheeses that you can use to prove to people that goat cheese is more than just the crumbles you put on a salad.  It’s an eye-opening cheese.
WR: What is your take on American cheese making right now?
RM: It’s a very exciting time. People ask for it more and just as a frontier, it’s where a lot of the exciting new stuff is happening right now.  Just the past five years we’ve gotten to this point where people no longer say “there’s this guy in Vermont (for example) who makes a Gruyere” they say “there’s this great new cheese I had from Vermont.” It’s gotten a little less referential to pre-existing European cheeses. Customers understand you’re not making some other style of cheese that already exists but in the states.
WR; To liken it to beer, I feel like the artisan cheese business in PA is where craft beer was in the early 90s.  People just starting to get interested in local production and different flavors.  You even see the same thing with what you were talking about recipe wise, where there are now American IPAs as their own style.
RM: And no one thinks of that as an unusual thing nowadays.
WR: Exactly, it’s not just Colby, Swiss and Jack. I’m the same way with beer: it’s not just Bud and Coors anymore. People have more choices. Even saying American cheese conjures up the image of the pale yellow slices and we need to change that.
RM: I think we’ve been really successful at that over the past decade.  We’re past the introductory phase into one with a lot more innovation.
WR: If you free yourself from the idea, “well I have to make a Crottin exactly like a French one”, then you won’t limit yourself.
RM: Where I think Baby Bloomer started to go right was when Debbie decided, I’m just going to let this milk and these cultures do what they want. Instead of controlling it.  So, it’s cool that when I came here you said. Well we made this one cheese a little different and we’re going to see what happens. I think people are letting their happy accidents kind of progress a little further, as opposed to forcing them into being something else or junking them.
WR:  Yeah, there’s a lot of variables there to play with. Happy accidents, I like that.

RM: You guys doing farmers markets?
WR: We’re just reaching out to them now. Right now, we’re focusing on filling our first orders.
RM: This is your first official batch but fourth batch since getting licensed?
WR: This is our fourth batch since getting licensed. This is our first legal for sale stuff.
RM: That’s kind of unusual to go to a retail outlet first. As opposed to the farmer’s markets.
WR: Definitely the season was a factor, but I must admit I feel like there’s a level of prestige having the cheese at Di Bruno Bros. Though I’m not doing it for the recognition, I like having it in an outlet where people respect food and respect the cheeses themselves.  Having our cheese side by side with cheeses from around the world is very cool.
RM: And we like as cheese mongers like having them side by side and having customers taste two cheeses and go for the one that’s made 45 minutes from Philly.
LR: Does it make you nervous that you’re getting the first batch?
RM: Not really (laughs) in June we tasted…what was it, your first batch? It was great.
WR: That was my third batch and my first without Debbie looking over my shoulder. I feel pretty confident you’ll be pleased with the results.

Come and try the results for yourself at Di Bruno Bros Rittenhouse, Ardmore and our original location in the Italian Market.  I think you’ll be pleased too.

Great post! I can’t wait to try the second incarnation of Amazing Acres.

I’ve already tasted their wonderful cheese (Herbs de Provence is my favorite, so far). I wish Lynne and Will the very best with the dairy. They are great friends and I know they will be very successful.