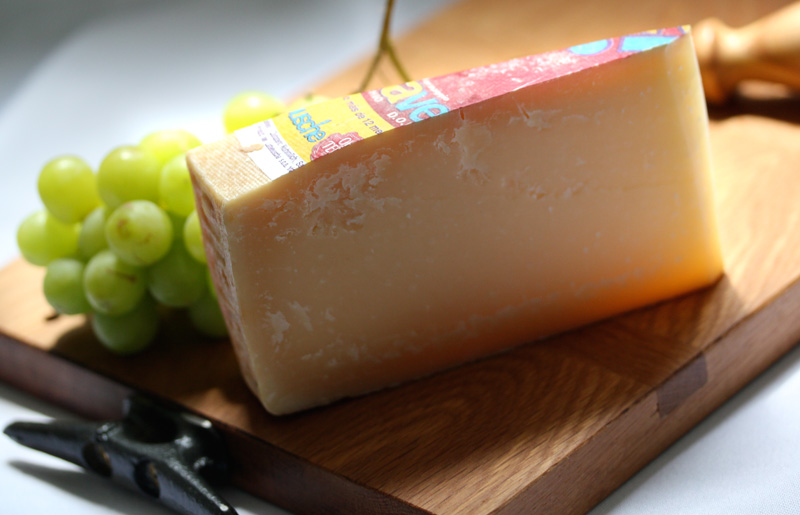 Until I really got into cheese a few years ago, I never considered eating a hunk of the hard stuff, like Parm or Pecorino, unless it was grated. Now I know better. Some of the tastiest cheeses are relegated to “accents” in part because they have so much flavor. Eat them just as they are, without starches or sauces, and you’ll be surprised how delicious they are.

Take Piave, a veritable Mars Bar of a cheese. It smells like almonds and tastes like butterscotch nougat. The texture is dense and flaky, like a quality Parm, but it’s less salty. At $7.49 a half pound, it’s also substantially cheaper, which makes it a good cheese to keep on hand for a nibble before dinner, alongside a glass of fruity Merlot or a handful of grapes.

Piave comes from Veneto, an Alpine region of northern Italy. Special cows, called Bruna Alpina, are native to the area, and their flavorful milk is rich with the taste of wild grasses and mineral springs that flow down from the Dolomites into the Piava River.

Look for Piave that has been aged a year, often called “Piave Vecchio,” meaning Old Piave. It’s more savory than younger batches, and the toasty sweetness is very pronounced. For a summery snack, try pairing Piave with dried mango and Marcona almonds, or shave it over arugula and toss with olive oil, a squeeze of lemon, and some roasted pine nuts.

Whatever you do, be sure to try Piave by itself. I have found that it keeps well — and tastes especially good — on a bike ride.