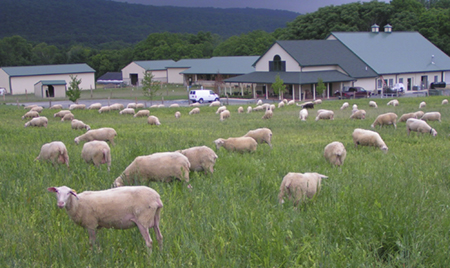 One of the most enjoyable perks of being a Di Bruno’s cheese monger is what we like to refer to as culinary pioneering. Sniffing down leads and gathering information (and the occasional sample) of new and exciting cheese is a constantly rewarding and exciting process. If being at Di Bruno’s gives an enterprising cheese lover a chance to be a culinary pioneer then the constantly expanding and always changing world of Artisan cheese represents the frontier of the gourmet food world which a cheese monger has to move toward to stay on top of their game.

But sometimes, happily for both the cheese monger and customer alike, the frontier comes to us. Great dairies are springing up all over the state of Pennsylvania and its neighbors. These farms are creating unique variations on European classic cheeses as well as doing a little pioneering of their own by inventing cheeses unique to the that particular farm and giving the eager cheese monger something they’ve never had before from right in their own backyard. One such dairy is Long Valley, New Jersey’s own Valley Shepherd Creamery.

Eran and Debra Wojswol met at a small engineering school in New Jersey, neither of them had come from a shepherding background but had been fascinated by the wonderful selection of sheep’s milk cheeses they encountered while traveling in Europe. Of particular note were those of Tuscany, Provence and the Spanish Basque Country. When asked by a 2008 interviewer why he chose the notoriously rigorous work of sheep’s milk dairying, Eran came back with the typical engineer’s response of “It was hard.” Extensive travel to Spain, France, Italy and Belgium gave the Wojswol’s much needed training and a feel for the variety of cheeses one could potentially create using sheep’s milk. They brought this variety back with them to New Jersey , where the Wojswol’s produce a listed 24 distinct cheeses and make a good many more, in varying quantity whenever inspiration strikes. We at Di Bruno’s are happy to offer a selection of three wonderful sheep’s and mixed milk cheese’s from Valley Shepherd with a constantly changing selection to come in the future as we continue to work with Valley Shepherd and their intricately planned but traditional approach to cheese making.

The very first cheese that the Wojswols deemed good enough for Valley Shepherd to release to the public for sale is so good that any cheese lover could taste the effort and patience that went in to its creation. Oldwick Shepherd comes in a small wheel that is aged for 3-4 months in the self-built affinage facility at Valley Shepherd. Oldwick Shepherd is a great example of a cheese that anyone would refer to as flavorful without being so powerful that it might be a turnoff for someone who says they don’t like “strong” cheeses. The rich, buttery flavor of the sheep’s milk leads to something a bit stronger and more tart without being gamey. Something like the herbal, flinty quality in the finish of a Garroxta might not be too far off, though the seamless transition and balance of the cheese makes it a great place for the Manchego fan looking for something new. Like Manchego, it goes well with quince paste or a little bit of fig & balsamic jam.

This mixed milk cheese utilizes a little cow’s milk from the Wojswol’s neighbors and represents the closest Valley Shepherd gets to throwing their hat into the Cheddar game. Like any proper cheddar, Valley Thunder is hand milled to press out the moisture from the milk early on and help deliver the big, sharp flavor that makes Cheddar such a consistently popular pick at the cheese counter. Valley Thunder has a bite that lives up to its name while having a smoother texture and a slightly grassier flavor up front due to the sheep’s milk. Valley Thunder shows as much seasonal variation in flavor as the traditional Cheddars of somerset so each new truckle* of the cheese promises something new. Try it with some Tait Farms chutney and some crusty bread for a locally sourced Ploughman’s lunch.

A hearty mixed milk wheel that has the brown butter flavor of a nicely aged Comte but with a bit of the salty/sweet interplay of an aged Gouda. Tewksbury is unusual not only for the range of flavor present in each bite, but for the strength of those individual flavors on their own. The toasty notes are just as strong as the ones to be found in a 18 month Gruyere while the small, salty and sweet little crystals dotted throughout the cheese are sure to please a fan of the ever popular Primadonna. Tewksbury would hold its own with some nice Prosciutto Americano from la Quercia in Iowa but it would work just as well as a dessert cheese with our own Honey Roasted Pecans or Black Lava Cashews. Tewksbury has a big enough flavor to ensure it takes center stage in any pairing while being nuanced enough to leave those pairing possibilities as wide open as your imagination might allow. Just a hint of the possibilities to come from this world class cheese maker just 80 miles away.

I just tried Valley Thunder and Tewksbury for the first time. Wonderful stuff. I look forward to trying more of the 24 (!) cheeses made out at VS. Thanks for all the info.

I was lucky enough to stumble upon Tewksbury at my local Farmers’ market last weekend–it’s wonderful stuff. We melted some bits of it on top of a stuffed heirloom tomato, but the rest is reserved for eating stand alone. Nice post Rich.