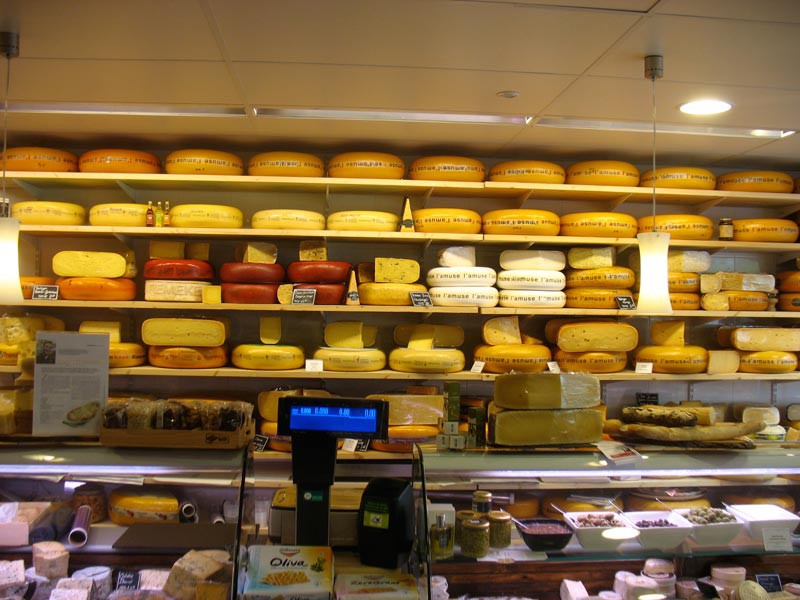 Waking up in Amsterdam for the first time is like waking up on Christmas day. The excitement was palpable and expectations were high as I rolled out of bed and meandered through the morning routine. Today, we are touring Friesland with Betty Koster. Betty is the owner of the L’Amuse Cheese Shop, the finest in Amsterdam, and is an international ambassador for all Dutch cheeses.

The two hour drive towards Friesland and the North Sea emphasized every preconceived notion we have about the Dutch landscape: endless miles of flat greenery, blue skies, and the occasional windmill. This bucolic countryside would be the emphasis of today’s education.

Our host cheese farmer was Otto-Jan, who, along with his son, manages a herd of approximately 200 jersey cows. The cheeses they produce are typical of what you would expect from the Dutch: Gouda, Gouda and more Gouda. They vary, of course, by age, or by the variety of dried herb that is mixed into the curd, but it is all the same basic idea.

But these Goudas taste better than the red wax-smothered Gouda we find in supermarkets. They are savory, sweet and nutty, pleasant but complex. Otto-Jan was willing to show us why his cheeses taste better, but not without dressing us up in these blue hazmat-esque suits. After about two minutes of taking pictures of each other taking pictures of each other, and the obligatory “That’s one small step for a Cheese Monger” crack, we were off to see the aging rooms.

Goudas that had been made earlier today were resting in a brine bath prior to receiving their wax rind. Others were nestled comfortably on hand-built wooden shelves, resting for up to 14 months. But what distinguishes these cheeses cannot be found in maturation. It is in the cow’s diet.

After ridding ourselves of our protective jump suits, Otto-Jan took us out into his fields to show us just how luxurious his cattle live. On the way, he explained the the Dutch government is enforcing the preservation of this land. Not only does the owner of the property have to maintain the landscape, but he cannot build any modern buildings or establish any structure that is disharmonious with the natural beauty.

This verdant nature reserve is where Otto-Jan’s cattle graze. Tall grasses, flowers and herbs flourish here, and the cows clearly love the buffet. As we enter their territory, a few approach us with curiosity, but most continue eating. While we came here to inspect the cow’s diet, it was had not to get caught up in the unique, photogenic beauty of the animals themselves. After approximately an hour of idling in the grass, we headed back to Amsterdam.

On the way, Betty took us on a brief detour to show us an island fort where she will soon start aging her celebrated Gouda. Apparently, aging cheese in forts is a bit of a trend in Europe. As it is reachable only by boat, we were not able to tour the facility, but it was exciting nonetheless.

Day 4 will be posted soon, detailing a trip to South Holland to visit the man many feel is the best producer in the country.