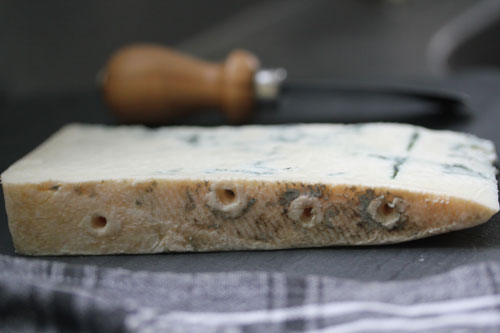 I know a man who buys two blue cheeses a week and eats them for dinner. No, he’s not my boyfriend — he’s my muse. When I have a humdrum day, I often think of the cheese boards I have eaten at his house, and then I perk up like daisy.

Two summers ago, the Muse introduced me to Cremifacto Verdi di Capra, a goat cheese from Lombardy that had become his infatuation. “This blue will haunt you in the dark,” he told me, “It’s so mild and creamy.”

I nibbled and shrugged. I like my blues with Stilettos – sharp and to the point. I don’t dream in mild and creamy.

But this spring, I find myself returning to his words. Cremifacto and I, we have formed a bond. It comes with me to work in my tiffin, along with pears and almonds – a perfect pairing. And it reappears at night on my kitchen counter as I am making dinner – just the right accompaniment to sparkling wine.

Cremifacto has haunted its way into my life.

I like its velvety mouthfeel, its aroma of mushrooms and lemons. Its white paste looks snow-packed, and its veins are tinged with green – long and thin — like the stems of daffodils.

Look, you can even see where the needles were inserted into the rind, to allow air to circulate.

Turns out I’m not the only one who can’t stop nibbling. Cheese columnist Janet Fletcher describes the same experience in the San Francisco Chronicle. She writes, “The texture reminds me of feta: the interior is dense, even slightly fudgy, yet creamy. I couldn’t stop nibbling it….”

So now there are three of us — Janet, the Muse, and me — haunted by this cheese. Why not declare Cremifacto the official blue cheese of spring?

Even if you think you couldn’t like a sweet goat Gorgonzola, you may find yourself swayed.

I like my blues sharp too, but after trying a yummy Birchrun Hill Blue I have expanded my blue cheese profile. Good article!