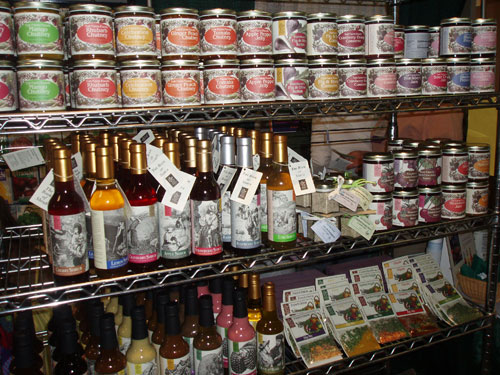 Right outside of State College, Pennsylvania, sits the much lauded and highly diversified Tait Farms. Purchased by Marian & Elton Tait in 1950, they originally raised everything from sheep to Christmas trees, and gradually became one of central Pennsylvania’s premier spots to pick your own fruits & vegetables. It wasn’t until the 1980s and a intimidatingly large Raspberry harvest that Tait Farms entered the value added food business in earnest. Marian & Elton’s son, David Tait, decided to convert some of those now-frozen berries into a colonial era drink mixer called Shrub. Tait Farms eventually grew to produce a wide array of products from pancake mixes to Cheddar-ready chutneys to a Muffaletta perfecting fig and olive relish.

But, seeing as how this blog is called the Queso-Files, let’s take a look at how some of the tasty stuff from Tait Farms goes along with some our favorite Di Bruno’s cheeses.

The dark, ripe fruit flavor of Tait Farm’s berry jam pairs perfectly with the tartness of a a goat’s milk cheese. While it goes quite nicely with a softer, younger goat like Bucheron or Shellbark Sharp, I prefer it with something a little more aged. The subtly sweet notes already present in an aged goat like Garoxta or Montcabrer are brought into clearer focus by the sweetness of the fruit. Also fantastic with an aged Goat (or Buffalo) is Alyssa’s Berry Sauce, a lightly spiced blend of Strawberries, Raspberries and Blueberries dreamed up by the youngest member of the Tait family.

Tait Farms uses a mixture of fresh and dried fruits to make an intensely fruity but not too sweet Apricot butter. The butter is thick and quite rich for all its earthy sweetness, with a texture approximating a less milky dulce de leche. This texture lends itself well to pairing with one of the sheep’s milk cheeses of the french Basque country such as Abbaye de Belloc or Ossau Iraty. The sweetness of the fruit butter moves in sync with some of the stone fruit notes present in the cheese and the earthiness is a nice compliment to some of the more intense, meaty flavors of the cheese’s finish.

Colston Bassett Stiltion and it’s rowdy raw-milk cousin Stichelton are always some of my favourite blues to bring out in order to surprise the customer who thinks blue cheese is just the tart stuff you get pre-crumbled at the grocery store. The mix of the toasty, almost fudge-y flavor with the buttery texture are an eye-opening combination. Either of these cheeses go wonderfully with Tait Farms Sour Cherry Dark Chocolate Sauce. The chocolate flavor in both the jam and the cheese meld perfectly and the sour cherries provide a nice counterpoint to the rich butter milky flavor that hits you first in both of these cheeses. Just put a little bit of sauce on top of a wedge of this cheese and you’ve got an instant and savory take on cheesecake!