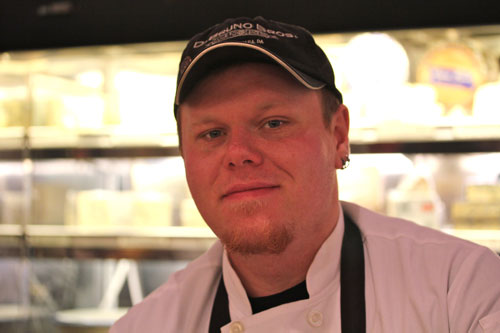 His job: I specialize in aging flurry rind goat cheeses – Selles-sur-Cher, Saint Maure, Crottin de Chavignol. They require constant air and constant moisture – you’ve got to keep an eye on them or they’ll go under.

Recently, Daphne Zeppos was in here. She’s an aging specialist, and she said, “Wow, I’ve never had a Crottin like that before.” Holy cow! I was so excited.

How he learned about affinage: Trial and error. When I came on at Di Bruno Bros., we had an aging cave but nobody was using it, so Rich [Morillo] and I started experimenting. We destroyed a horrifying amount of cheese. But we learned a lot. I love working with Crottins – they’re my little guys. Nothing makes me happier than being inside the cave, listening to some Iron Maiden, and playing with my cheeses.

Cheese of the Moment: I love a good goat cheese Crottin. When I first tried it, I hated it, I’m not going to lie. Then I had a locally made Crottin from Shellbark with some strawberry jam on an English muffin. That changed everything.

I also love Sue Miller’s cheeses. Her Fat Cat is great. And her last wheel of Birchrun Blue tasted like a Roquefort and a Stilton had one night of passion.

Words to live by: I’m a foodie. I love food, and I love getting other people to eat it. I learned that from my mom. Feed people and they’re basically happy.

His ideal meal: A good steak, blue cheese, and a nice whiskey. Nothing beats a Delmonico with a dry blue, like Bleu D’Auvergne.

On bread: Ciabatta is my favorite bread for cheese. It’s so airy – it’s perfect.

On beer: I grew up on Miller Lite and Budweiser. My first event with Di Bruno’s was a Sly Fox and Unibroue tasting, and I was like, wow, this is how beer is supposed to taste! My next tattoo is going to be a beer label — Stone Brewery’s Arrogant Bastard.

Favorite hangout: Nodding Head Brewery – they’re like Di Bruno Bros. but with beer instead of cheese. They’ll let you try anything.

Best thing about Philadelphia: You can hop on a bus and get anywhere.

At the end of our interview, Dan Black offered a list of his favorite cheeses. Stop in and talk to him at the Di Bruno Bros. cheese counter at 17th and Chestnut.