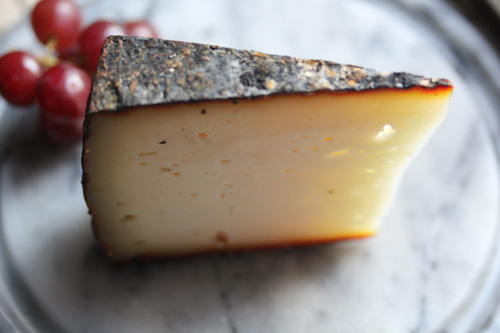 As much as I like beer and wine, I am a cocktail person. I have a thing for fizzes and rickeys. Don’t hold it against me. If I had the choice between a gin’n tonic or a big smiley Cab, I’d go for the gin – there, now I’ve come clean. Can we move on?

Good, because I need to tell you about my Ginepro problem. I have some in the fridge, and I can’t stop sniffing it. It smells like, well, a gin’n tonic – faintly, of course, but it’s there. I have a found a cheese that smells like my favorite cocktail, which means, in my head, summer has begun.

This is a very useful way to cope with slushy sidewalks and heavy jackets and missing mittens. I think Ginepro may just be the mood-altering, feel-good, ray-of-sunshine cheese that everyone is looking for, so I am going to suggest we change the name from Ginepro – so clunky: JIN-uh-pro – to The Cheese of Hope. Cheezahope, for short.

Ginepro, a.k.a. The Cheese of Hope, smells like a gin’n tonic because it’s rubbed down with juniper berries and a smear of balsamic. This makes the rind look like bad asphalt, but the taste of the rind is just terrific. In fact, this is one of those cheeses where I prefer to nibble the exterior and would be really just fine if someone else cored out the center and used it on pasta.

Kidding. I would never condone such a thing. Ginepro, a.ka. The Cheese of Hope, is so delicious precisely because it combines the bright citrusy tang of a sheep’s milk cheese with the warm, piney ting of juniper. It’s both sweet and astringent – there’s the cocktail – and, frankly, it will change the way you think of Pecorino (predictably sharp, sometimes salty to a fault).

I have been experimenting, and Ginepro goes well with a big Italian red or an IPA, but I don’t even need those props. With a bowl of soup – try corn chowder – Ginepro is the glimpse of patio life that I need to get through February’s hump. There. You have it. I am Ginepro’s slave.

[…] This post was mentioned on Twitter by Emilio Mignucci, Di Bruno Bros. Di Bruno Bros said: New from the blog: Ginepro: Cheese and…gin? – As much as I like beer and wine, I am a cocktail person. I have a thin… http://ow.ly/1btpBO […]