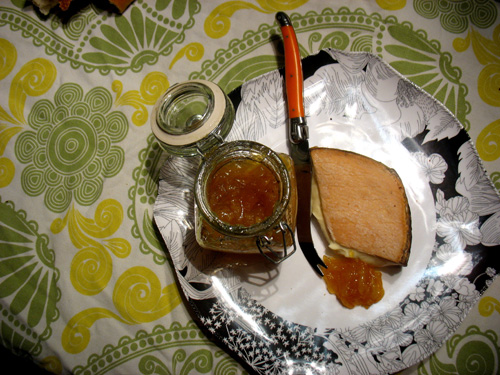 Throughout the course of the day, we mongers routinely taste twenty to thirty cheeses. Opening a new wheel? Sample it. Can’t recall the subtleties of that obscure cheese from the Italian Alps? Better take a reminder-nibble. Just received a batch of samples from a northwest Pennsylvania farm? You get the idea.

Customers often speculate that the endless buffet of samples is the greatest fringe benefit of working at Di Brunos, and while I am not complaining, there are days when cheese consumption is more a necessity than a desire.

But every once in a while, in the midst of all the obligatory snacking, a cheese stops us in our tracks. Something so profoundly delicious that it demands to be tasted again. Such was the case last week with the season’s first batch of Winnimere.

I need only mention that Winnimere is produced and matured at the Cellars at Jasper Hill in Greensboro, Vermont, and there is an immediate assurance of quality. But even compared to the lineage of Jasper Hill, Winnimere stands alone.

Winnimere is modeled after Försterkäse, which itself is a derivative of Vacherin Mont d’Or. And like its inspiration, Winnimere is 500g wheel wrapped in spruce bark. As it matures, it is bathed in Phenomenology of Spirit, an oak-aged sour ale from nearby Hill Farmstead Brewery. The spruce and beer washing impart a haunting helix of flavors including sour cherries, bacon fat, bark, pine and smoke. It encapsulates everything romantic associated with the forest and presents it in one sublime, sylvan morsel.

I took a tiny piece home to meditate on, and forced myself to come up with a suitable accompaniment. To contrast the rich mousse-like texture, I wanted something citric, and my mom’s homemade orange marmalade provided the perfect balance. Throw in a loaf of bread and a glass of highland Scotch and dinner is served.

Took Hunters word ( at 9th street ) that this was a show stopper. Dont waste your time on the Marmalade, Winnimere will get Ahh’s and Ohhh’s from everyone around the table. A bit of Heaven indeed.

“Sublime, sylvan morsel” and “haunting helix” means you win the World Cup of Blogging, in my mind. This pairing sounds amazing. I feel like a cretin for eating it unadorned.

M. Fromage, eating it unadorned might still be the best way to eat it! I was just trying to be creative.

spruce wrapped, sour ale and marmalade, what a sensational palette.

Wow, that pairing looks delicious! You’ve made me hungry!

[…] This post was mentioned on Twitter by Emilio Mignucci, Di Bruno Bros. Di Bruno Bros said: New DB Blog Post! Winnimere Will Stop You in your Tracks – Throughout the course of the day, we mongers routinely ta… http://ow.ly/1bsjRu […]

If you can’t get homemade marmalade, we recommend Rigoni’s Seville Orange. Enjoy! http://www.dibruno.com/rigoni-di-asiago-base.html

It sounds like heaven on earth. I hope I can get there before you sell out.

that looks and sounds great. wish my mom knew how to make orange marmalade. do you sell anything similar in the store?

WOW. Spruce wrapped cheese washed with ale, fresh bread & orange marmalade and a single malt?? The only thing missing is a comfy chair by a roaring fire.

save us a pound! The mouth watering description is perfectly matched with that drippy, oozing , scrumptous photo!