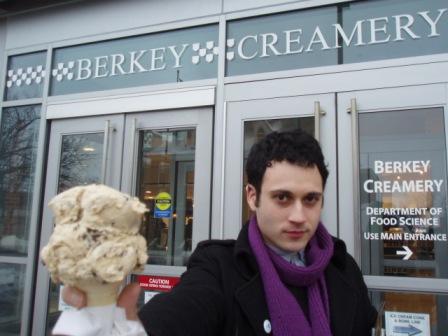 Day two of the conference included a bit of an adventure outside of the cheese bubble with a morning charcuterie class (that’s cured meat)  led by Brooks Miller of North Mt Pastures in Newport, PA.  Basically his goal is to get more Pennsylvania farmers to turn their awesome heritage breed pigs from this:

In fancy man industry terms we call this creating a value added product.  A good number of Pennsylvania’s cheese makers were taking courses in what gets called value added dairy around these parts. Some other value added products include Kim Chi (from cabbage & spices) and delicious, delicious beer (from grains)

Brooks was hoping that a few years down the line the conference might have a booming run of charcuteire classes much like it has a well attended cheese track today. Much like cheese making, the process of making charcuterie was described as being made up primarily of raw materials and time, knowledge and most of all, patience with trial and error.

He elaborated on that last one by talking about how his first attempt at bacon wound up tasting “like salty cigarettes.” This reminded me of more than a couple stories from cheese makers about how some of their test runs of new cheeses wound up too soft, too moldy, too hard, too salty or any other number of adjectives that result in having a cheese that gets fed to the pigs. Unlike cheese making, a lot of the gourmet charcuterie produced in PA right now isn’t made by a farmer/cheese maker but by a specialist in a retail store (like us) or in a restaurant.  North Mountain farms was trying to throw some more of the folks who own these tasty, tasty pigs into the game and led the class through a quick prosciutto style cure, showing how a simple recipe (sea salt, juniper, black pepper and cloves) and a bit of time and TLC can make something much greater than the sum of it’s parts..

After a quick lunch, which I certainly didn’t put the not at all Pennsylvanian Keen’s Cheddar on, it was off to more cheese.

Here are some folks with the very new multi-animal Doe Run Farm of Chester County.  This is gonna be one to look out for in the spring.

Some additional cheese samples tucked away and I was headed back to Philadelphia. After a quick stop at Penn State’s famous Berkey creamery

I am actually not holding this thing that far away from myself. It is almost 3/4 as big as my head.
http://creamery.psu.edu/

Ultimately it was great to try out some more of the specialty foods the state of Pennsylvania has to offer and to talk to just a couple of the people who work so hard to not only produce that food but who work to advance the variety and quality of food available in the state.  That and I learned…Alpacas are awesome.

Love the insight…..will also have to pay more attention to Alpacas……..

Another great post. I love that Kim Chi pops up. I am dreaming of Kim Chi tacos.