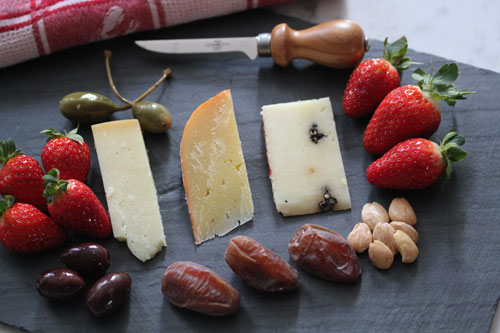 Few things are as romantic as sharing a cheese plate. You pour some wine, light some candles, and let the nibbling begin. For Valentine’s Day, a lot of people get hung up on symbolism, but what means more: a box of box of heart-shaped chocolates or a selection of cheeses that have been around for centuries?

Allow me to present my Cheeses of Longevity series: 3 cheeses that have more history than any human relationship. Eating cheeses like this can only bring good luck.

Imagine the smell of an earthenware pot, then add a hint of smoke. That’s the aroma of Fiore Sardo, a rustic hard cheese from Sardinia that predates the Roman Empire (the recipe, that is – not the cheese itself). Made from sheep’s milk, then lightly smoked over balsa wood, this ancient wonder melts on the tongue, releasing bright, sweet-salty notes powered by gentle muttony undertones. Serve this gem with green olives or strawberries, and Netflix the first season of Rome.

This golden cheese is surprisingly cheddary despite its Spanish heritage. It’s made on Minorca, an island off the coast of Spain that that has a long history of cheese making. There are over 600 dairies on Minorca and the quality of the cheese varies, so look for farmstead makers who rub the wheels with paprika, a technique that imparts a saffron hue and a trace of heat. The Spanish eat Mahón sprinkled with olive oil, black pepper, and tarragon, but it also pairs well with dried fruit and almonds. Pour yourself a glass of Syrah, and read your beloved some Cervantes.

If you like Pecorino, you’ll love this peppercorn-studded version that is indigenous to Sicily. It’s salty, zesty, and pleasantly sheepy with a sweet, milky smell. Pepato adds a bright kick to pasta or risotto, but it’s delicious straight up alongside grapes or olives. Mix a pitcher of martinis and put on some Sinatra. This cheese made by the early Romans should spice up the evening and keep the fires of love burning long after the peppercorn flavor disappears.

For more advice on cheese and love, visit Madame Fromage