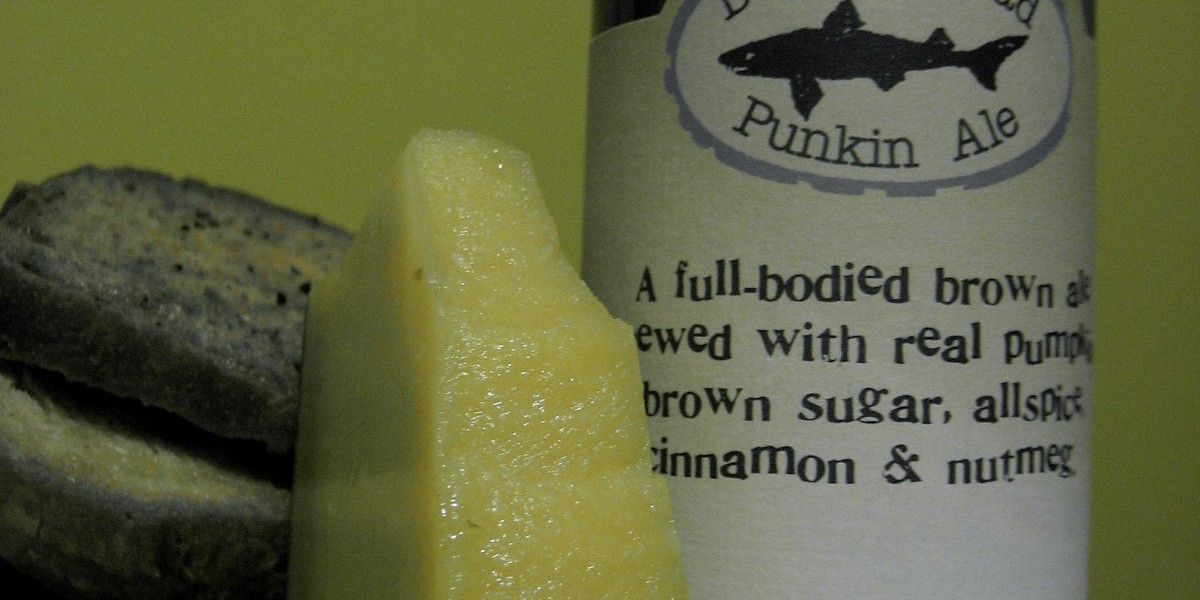 There are certain beer and cheese pairings that consistently impress: Farmhouse Cheddar with India Pale Ale, Stilton with Stout (traditional, chocolate, or otherwise), tangy goat cheese with Wheat Beers.  Regardless of producer or nuance, these combinations are always harmonious, stimulating the palate with their chemistry and interplay.  What solidifies these as classic pairings is that they are available year-round, heeding your beck and call whenever you desire.  But what about the slightly obscure beers, the seasonal styles released one month and sold out the next?

One of my favorite seasonal varieties is the Pumpkin Ale, and perhaps my favorite of them is Dogfish Head’s Punkin Ale.  Originally brewed in celebration of the Punkin Chunkin event held annually in Delaware, Punkin Ale pours a hazy amber color, and greets the nose with aromas of cloves and allspice, harbingers of things to come.  Notes of vanilla, cinnamon and nutmeg are most prevalent at first sip, but as those tones fade, the pumpkin comes through along with caramel and toasty notes.  Coupled with the sturdy 7% abv, these flavors give an overall sense of warmth, of coziness.  It is, to be overly romantic, the perfect beer to share with a loved one while tending the fireplace in winter.

Pairing cheese with a beer like this is exciting.  It’s multitude of layers and subtleties can lead you down many paths, and most will be successful, but Punkin Ale’s association with cooler months demands an Alpine cheese.

Vacherin, Cave-Aged Gruyere, Raclette or Appenzeller would all be suitable companions, but the French Comte is Punkin Ale’s true soul mate.  Matured at cool temperatures in a subterranean army fort in the Jura mountains, Comte has a wonderfully rich complexity that is unparalleled by its peers.  Break a piece under your nose and take a whiff: melted butter on toast, heavy cream and, at times, whipped, sugary egg whites.  But that is just the beginning.  On the palate are toasted hazelnuts and almonds, more cream, grasses and, in the bites closest to the rind, dark, roasted flavors and something akin to lanolin.

When combined, these two equal something greater than the sum of their parts.  The Comte yields to the assertiveness of the Punkin, but it does not disappear.  The butter and cream backbone provide the perfect cushion for the spices in the beer, while the roasted nuts pair beautifully with the caramel finish.  This is certifiably soul-satisfying.

Just reading your descriptions of these wonderful aromas takes me back to my grandma’s kitchen. Can’t wait to experience that journey.

Okay, now I have to stop in for another whiff of Comte — whipped, sugary egg whites! You amaze me. Great post.

Totally yum!
Heaven sounds like your magical description of cheese and ale. I am starving, thank you very much!