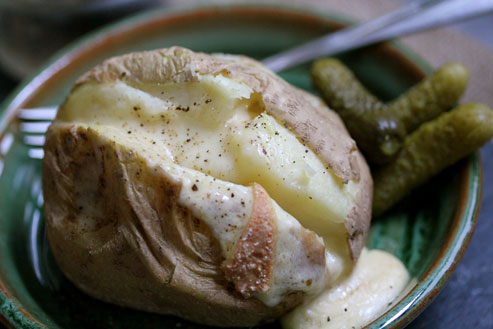 The colder the weather, the stronger the cheese – that’s always been the rule in our house. After the first freeze, I start dreaming of Raclette. That’s probably because I grew up with a Swiss mother who was famous for her melted cheese dishes, and the minute she saw some sleet on the ground she pulled out the fondu pot or plugged in her Raclette machine. Those Alpine types know how to stay warm.

Raclette is whiffy – you’ll get your classic scent of dirty socks – but it doesn’t taste as strong as it smells, especially once you melt it. Simmer some spiced wine on the stove, and you won’t even notice the coils of cheese vapor penetrating the upholstery. (Kidding. I actually like the smell – it’s lumberjacky.)

Traditionally, Raclette is heated by a fire, then scraped over boiled potatoes. Raclette actually derives from the French verb “racler,” which means “to scrape.” At some point, a cheese-melting genius invented the table-top Raclette broiler, which comes with individual skillets and a set of scrapers. It’s not a very practical gadget, but it comes with cachet. Once your friends experience the bliss of sitting around it for hours and eating toasted cheese, they will love you forever and you will never be single. Forget match.com, get a Raclette machine.

If you are single and you want to make Raclette for one, boil some potatoes, top with slabs of Raclette, and pop the business into your toaster oven. Serve yourself some cornichons and a pint of Belgian ale, and you will be living the Raclette lifestyle.

Here’s the real secret: with Raclette, you can make a tasty meal out of two ingredients – cheese and potatoes. It’s the dream of every fatigued holiday host. There’s no bird to baste, no roast to truss, and yet, your guests will feel that you have gone to some trouble. Toss a salad, put out some pickles, pass around a bar of Swiss chocolate for dessert – and you’re done. With two snaps, you’ve hosted a Raclette party to remember.

Now all you have to do is air out the house.

Thanks for your comment, Madison Bleu. The Raclette broiler really is worth it. I hauled it out again this year on New Year’s Eve. It’s become my favorite holiday tradition, and it’s so easy to put together. Cheers!

I just love your posts. This one makes me want to go out and buy a Raclette broiler and have a party just like you did a year or two ago. Good read as always!