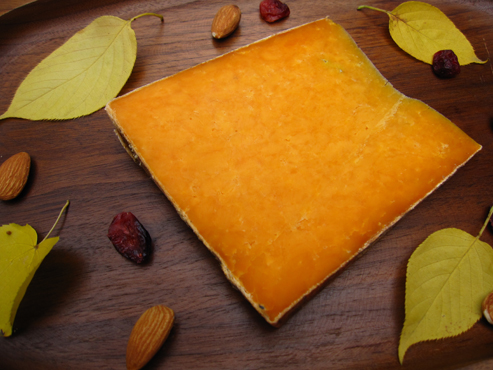 With a name like Sparkenhoe, you know you are in for tradition. This golden cheese originated in 1754, when an English farmer began naming his bold-colored wheels after his prize bull, Old Sparkenhoe.

Today, the recipe lives on. Since 2005, the Clark family of Leicester, England has been making Sparkenhoe the old-fashioned way, using raw milk from pasture-raised cows and natural orange coloring from the Annatto plant.

The wheels are matured in cloth, in the same manner as farmhouse cheddar. After six months or so, this firm, slightly crumbly cheese is ready for companionship – namely, the accoutrements of an autumn cheese board.

Sparkenhoe is fairly mild with sweet, toasty notes and a gentle tang. Think of it as a good base coverlet (like pulling out your first warm blanket) from which to build a snack plate. Set out a wedge, and surround it with dishes of caramelized pecans, dried cranberries, dates and figs, even some candied ginger. A savory jam with tomato or caramelized onions pairs well, too, as does salami.

This cheese is also a great toaster lover. Try melting it over thinly sliced apples on a hunk of rustic bread, spread with dark mustard. You can also use it to brighten a fall salad. Try shaving it over lightly dressed greens with toasted nuts, pears, and dried cranberries. Its russet spark is like lighting a match.

I just can’t get over it’s color. It’s gorgeous and I can totally imagine it with apples.