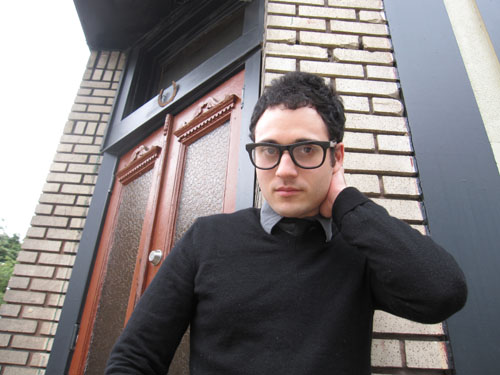 Years at Di Bruno Bros.: about 3

His specialty: I deal with a lot of our affinage, especially of the washed rinds. Affinage is essentially cheese care at its highest form.

His cheese of the moment: Muffato, a Northern Italian blue coated in mint, chamomile, and marjoram leaves. At first I thought it was gimmicky, but it’s a nice example of synthesis in a blue.

How he got into cheese: I moved to Philly in 2000 for school, and I started getting to know some of the cheesemongers at the Di Bruno Bros. in South Philly.  Zeke, in particular – he’s like my cheese godfather. One day, I asked about work, and that was it. He gave me an application. That was about three years ago. Every cheesemonger is basically a cheese lover first.

What he likes about the job: I enjoy being in a position to offer customers something new, or something they’ve been searching for. Like every cheesemonger, I’m driven by a degree of altruism and avarice. In other words, basically I want to find and eat every last cheese in the world, but then after I’ve done that I want to share them with everyone.

His thoughts on local cheese: We carry Amazing Acres out of Chester County – this is something I’m personally proud of. They have a beautiful soft-ripened cheese called Sea Smoke that I just love. There aren’t many like it coming out of America, or at least there aren’t many cheesemakers who make it as well or as consistently. I also love Sue Miller’s Birchrun Blue – I think it’s world class.

On his nightstand: Cheesemonger: A Life on the Wedge, by Gordon Edgar; Hay Fever: How Chasing a Dream on a Vermont Farm Changed My Life, by Angela Miller

What he likes about Philly: People here care about food, and they recognize what good food is, across class and cultural boundaries. They enjoy eating without trumpeting it.

Inspirational! Gives you a real glimpse into the heart of a true cheese lover whose excitement on the subject is contagious. The expertise and desire to share gastronomic finds is laudable, and a wonderful reflection on all DiBruno’s has to offer-not only to serve, but to educate as well! A fabulous Philly resource!