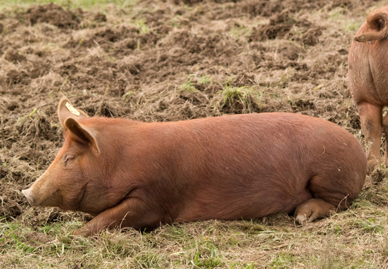 The pig is known as the king of the kitchen, or he ought to be if he isn’t, but over the years the noble swine has been crossbred into a fast-growing, flavorless bore (no pun intended). Before the high-density feedlot life became standard, pigs used to have regional and varied diets, distinct flavors and fat levels. Now, they are just a ubiquitous pale chop that pales in comparison to its former glory.

Pigs have not always been known as “the other white meat” because, years back, pigs didn’t have white meat–they had a healthy pink color from a seasonal diet and regular exercise.  Hope is not dead though, folks. The local heritage breed survives abroad and has been making a Rocky-esque comeback here in America.  Now, instead of hearing “pig,” you might hear Tamworth, Berkshire or Old Spotted–in other words, “heritage” breeds.

Some of the best products in DiBruno Bros. owe their flavors to their heritage. Jamon Iberico, for example, is made from a wild boar-like, black-footed pig native to the Iberian Peninsula and still raised free-range and on acorns — just like in the good ol’ days. La Quercia Prosciutto Americana is all Berkshire, baby! And our authentic Prosciutto di Parma is made from old school Landrace and Great White swine.

Compare the flavors in a slice of Berkshire prosciutto to that of Landrace: the Berkshire is sweeter and milder while Prosciutto di Parma is nuttier and more robust.  Fun fact of the day: Landrace pigs in Parma feed on the whey left over from making Parmigiano Reggiano, more proof that cheese only makes good things happen!  Fun facts aside, the real fact remains that every heritage breed has its own subtle nuances that prove diversity promotes happiness!

Old breed pigs tend to be more expensive than supermarket pork because they take longer to raise and cure, but the end result is more flavorful and nutritious. So, if you’re proud of your heritage–be it Italian Landrace, Spanish Pata Negra, English Berkshire, or any of the other lovely indigenous breeds–its time to get proud of your pork!

It’s funny. When you think of heirloom tomatoes all sorts of varieties immediately come to mind – like Cherokee Purple, Green Zebra, and Brandywine. But heirloom pigs….not so much. Thanks for the insightful post! And the image of those Iberico pigs grazing on acorns is too adorable.