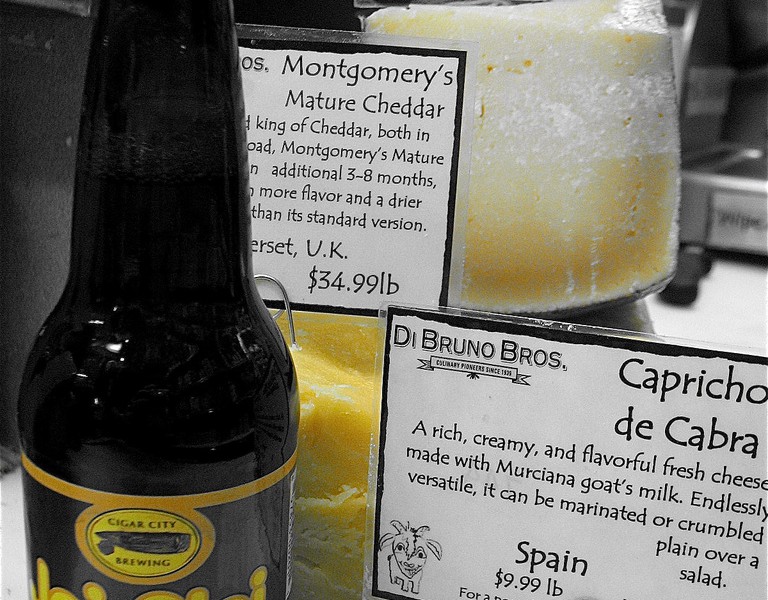 Last night we tried something a little different for Happy Hour…gotta keep those regulars on their toes!  Instead of pairing three cheeses with three beers, we paired three cheeses with one beer.  Using Cigar City’s Jai Alai, we explored how one style of beer reacts differently to different styles of cheese.  Forcing ourselves to think outside the box, we discovered some successful pairings in places we least expected to find them.

Our first unexpected successful pairing was Capricho di Cabra, a fresh, tart, unrinded goat milk cheese from Spain.  At first, cheese and beer were just two delicious things sitting on the palate, not interacting.  Capricho with its creamy, lemony notes on one side of the tongue, Jai Alai with its apricot and floral hoppiness on the other, they sat like two halves of an ideal romance, back to back, unaware of the other’s existence.  Then, at once, notes of grapefruit came through in the Jai Alai and mingled with the lemon in the Capricho.  Jai Alai and Capricho turned, met eye to eye, and (cue Tchaikovsky’s Romeo and Juliet Overture), fell passionately into each other’s arms, proving that opposites do indeed attract.  Never before has a pairing gone from completely forgettable to forever memorable in such a short period of time.

At this point, we decided that if we can pair an IPA with goat cheese, we should at least try to pair it with a Pecorino.  As much as I prefer beer with cheese, my philosophy has always been to leave the Pecorinos to wine.  They do not offer much in terms of compatibility with beer, regardless of style, strength or alignment of the planets.  Nevertheless, we marched onward into uncertainty and pessimism.

After several samples and numerous failed attempts, we settled on Tiu Bore, an aged Pecorino from Sardinia.  Tiu Bore is washed with olive oil as it ages, which prevents it from drying out, but also gives it a flavor profile that, like olive oil, plays well with others.  Still, our ethos regarding Pecorino and beer proved correct.  Tiu Bore worked best not because it meshed with Jai Alai, but because it conflicted the least.  There was an overall sense of smokiness, almost as if we were sipping Islay Scotch instead of IPA.  This was enough to make things interesting, but not enticing enough for us to revisit it in the future.

Having satisfied the goat and sheep milk portions of our experiment, we moved confidently to cow.  Our one constant during Happy Hours was that IPAs went with cow milk cheeses, usually a Farmhouse Cheddar.  When we strayed from Cheddar, we stayed with something “Cheddar-y”: Asiago Stravecch, Mahon, Azores, and Trugole.  Having ventured off the beaten path for two unconventional pairings, we pulled out Montgomery’s Mature Cheddar, the king, to finish off the night.

There is something comforting about IPA and Monty’s.  Honest, rustic, hearty food and drink that go naturally together.  Both created in southern England, their histories are intrinsically linked, as are their spectra of flavor.  One bite and sip seems to encompass an entire farmhouse platter: roasted nuts, apricots and grapes, and, obviously, good beer and cheese.  All you need is a good salami or smoked meat and bread.

So, at the end of the night we added a couple asterisks to our mantra: 1)  You can, in fact, enjoy fresh chevre and IPA together.  And, 2) Pecorino, while not awe-inspiring, can at least be interesting.  But the crux of the matter was confirmed: Cheddar still rules.

Well crafted and fascinating exposition of thoughtful cheese and beer pairings. It opens the mind to unimagined possibilities of cheese uses.

Oy, I can’t believe I missed this one. I love the idea of three cheeses to a beer — this was a great write-up!

Give this guy a cigar!
What a description! and obvious enjoyment, of remarkable cheeses.