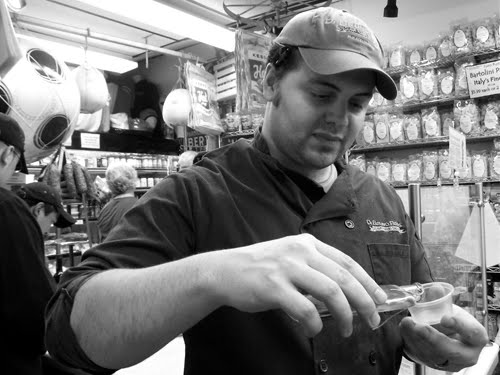 Fave cheese of the moment: Anton’s Red Love. It’s a washed-rind, brie-style cheese from Germany, and it’s made by a guy named Anton. He named the cheese after his wife, who is a redhead. Pair it with a Riesling, and you have to spread it on Faragalli’s Bread.

Best utensil behind the counter: My chef knife. A lot of people use a wire to cut cheese, but the chef knife does everything.

First day on the job: My first vivid memory is of trying to restock Frantoia Olive Oil, and I dropped three bottles. I was 14, and I was put under the tutelage of a guy who was maybe 16. It was a lot of stocking shelves.

Background: I majored in Classical Music at Peabody – in recorder. Then I came back here. I can’t imagine doing anything else.

Favorite kind of customer: A lot of people are afraid to say, “I don’t know what I like.” I love customers who do that. Usually, they leave the happiest because we sample different things until they figure it out.

On how to gain an appreciation for cheese: I always recommend The Cheese Primer, by Steven Jenkins; and Cheese, by Max McCalman.

We also have an after-hours program — from 6 to 8 p.m.Tuesday through Saturday, and 5 to 7 p.m. on Monday — whereby, for $100, a customer can bring in up to eight friends and the store is theirs. We keep a cheesemonger here, and they can try anything.

On hiring new cheesemongers: We look for two things: a willingness to learn and effort. We don’t look to hire people with prior cheese knowledge. We have 250 cheeses here on a slow day, so even if people have worked in other cheese shops, they don’t have as much knowledge as we’d want. There are books all over this place for people to study. It’s not math, it’s taste.

Thing he likes most about Philly: Its walkability.

Afterhours: I’m an avid Philadelphia sports fan. If I’m anywhere on a Friday night, I’m at the Devil’s Den. They have a great beer list – and French fries, which makes my wife happy.