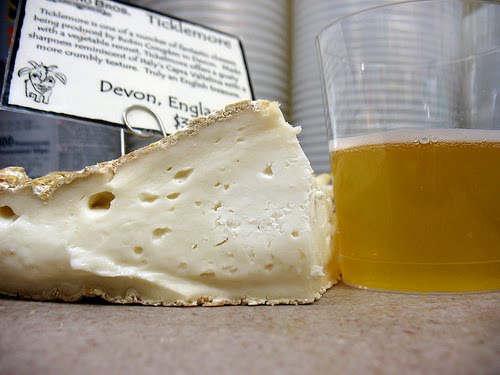 Thank you to Brian McConnell, brewmaster of the King of Prussia Rock Bottom Brewery, for bringing some growlers by for last week’s happy hour. Lets get right to the fun stuff:

Saison d’Ete with Ticklemore: This Saison had all the characteristics we expected, and many we did not. The usual notes of yeast and lemon were prevelant, but they were backed up with suprising notes of tropical fruit and vanilla. We wanted something goaty to match the citrus notes, but also something rich and lush to provide a base on which all the other flavors could mesh. Ticklemore fit the bill perfectly. A rare, small-production goat cheese from Devon, England, Ticklemore is ripe, mushroomy and creamy just beneath the rind, but has a firm and tangy core. Its grassy, lactic notes were the perfect compliment to the fruity, bready tones of the Saison.

North Star Amber with Ewephoria: A well-balanced Amber, the North Star is caramely and malty with some burnt accents, but counteracted by a firm hop backbone that prevented the beer from being overly sweet. We matched it up with Ewephoria, the cleverly-named sheep milk Gouda that tastes of roasted hazelnuts and sweet grasses. Each being semi-sweet and nutty, they matched beautifully.

Prussia’s Pride IPA with Challerhocker: Diverging from the usual trend of Cheddar and IPA, we paired this hoppier-than-usual IPA with Challerhocker, a strong, bold and wonderfully complex Gruyere-Style from Toggenberg, Switzerland. The richness of alpine milk helped to dampen the bitterness of all those hops. But instead of cancelling eachother out, the flavors lingered on the palate long after they were consumed.

Join us tomorrow night when we welcome Megan Maguire from Duvel and Houblon Chouffe.