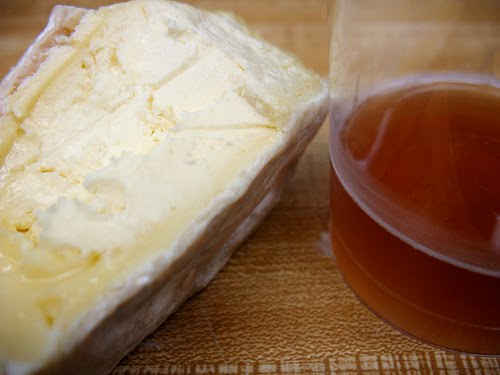 Fegley’s Brew Works have been producing world class beer in the Lehigh Valley since 1998, but have only been bottling for wholesale since 2009. Only in the last year have their beers show up on Philadelphia taps, but we predict that once they get firmly established, they are going to take off. Brewmaster Beau and rep Casey brought three of the finest beers we have ever featured, and they inspired three of our finest pairings.

Space Monkey Raspberry Saison with Andante Dairy Largo: This bottle-conditioned Saison is brewed with 300 pounds of raspberries, but surprisingly (and fortunately), the fruitiness was just one layer of a complex palate. Notes of wheat and a pleasing sourness balanced the fruit perfectly…this beer is a true delight. Largo is a hand-made, small-production triple cream made by Soyoung Scanlan in San Francisco. Enriched with creme fraiche, it, too, is somewhat tart but balanced, creamy and rich. On the tongue, the beer and cheese embraced each other, creating a beautiful harmony and a long finish.

Hop’Solutely with Asiago Stravecchio: The Hop’Solutely, as you might expect, is loaded with hops. At 11.5% abv, it packs a formidable punch, but not without a soothing finish of grapefruit and apricot. Powerful, but oddly easy-drinking. Asiago Stravecchio has a similar flavor profile, as, at two years of age, it is dry and fairly sharp. But there are also sweeter, fruity tones, especially a surprising hint of pineapple. The fruits and strength of the beer and cheese created a whirlwind of flavor and eye-opening intensity.

Insidious Imperial Stout with Colston Bassett Stilton: This has become a somewhat predictable pairing for us, but in the case of Imperial Stouts and Stilton, predictable is still surprisingly delicious. The rich, dark, sweet roasted flavors of Stout play so beautifully off the earthy complexion and chocolaty finish of the Stilton that it would be disrespectful to offer our customers anything else. This beats Stilton and Port, hands down.

So, do yourself a favor and request that your local watering hole start putting The Brew Works’ beers on tap, and then come to our next tasting on Wednesday, June 30th, featuring Rock Bottom Brewery.