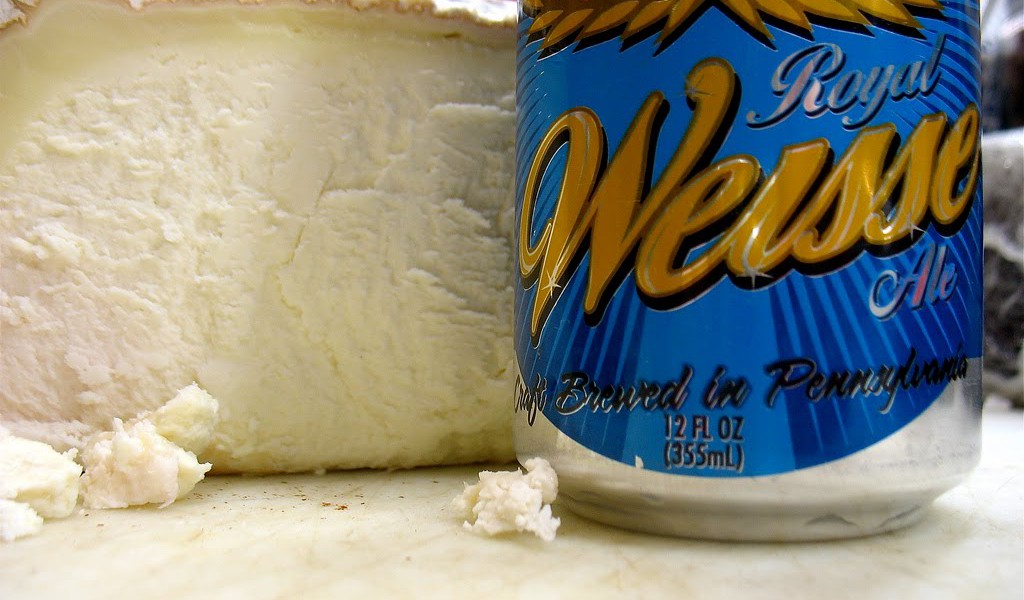 Last night we had the very distinct pleasure of having the Beer Lass herself, Suzanne Woods, join us to present Sly Fox beers. Sly Fox is (re)pioneering beers in cans, and Suzy was showing off four of them last night. Lets get to it.

Royal Weisse with Queso Leonora: A traditional, Bavarian-style wheat beer made with German malts and hops, the Royal Weisse is unfiltered, bready and lemony. We opted for a traditional pairing of fresh goat cheese, and Leonora was singing tonight. Wonderfully dense but still fluffy, oozy beneath the rind and in peak condition, its bright, citric notes met our standard criteria for starting a tasting.

Phoenix Pale Ale with Unterwasser: Made with American malts and hops, this Pale Ale is bold, medium bodied and slightly spicy. We wanted to give it a solid base to play on, and few cheeses are heartier than Gruyere. So we showed off one of our newest cheeses, the Unterwasser, which is a small-format, small-production Gruyere from Toggenburg, Germany. Its rich, earthy and hazelnut undertones established a firm foundation on top of which the beer nimbly danced. Opposites attracting, for sure, but attracting none the less.

Pikeland Pils with Hooligan: A light-bodied, dry German Pilsner, the Pikeland Pils is crisp and refreshing, so we could have used it as an intermezzo of sorts. Instead, we matched it with Cato Corner Farm’s Hooligan, a beefy, powerful cheese that smells like the feet of angels. Miraculously, the Pilsner was able to shine through the cracks of the potentially-overwhelming Hooligan, and they balanced each other well.

113 IPA with Keen’s Farmhouse Cheddar: The 113 on the label represents both the Route where you can find the Phoenixville location and, more importantly for tasting purposes, the IBUs. It is bold, but, unlike some IPAs, very balanced. So we were left with little choice but to pair it with our bold-yet-balanced farmhouse Cheddar. Made to the style of the original Cheddars from the mid-18th century, the Keens is big in flavor but rarely sharp. More earthy, complex and deep with a long, lingering finish. IPAs and Farmhouse Cheddars really are made for each other.

Incubus with Stichelton: At 10.3% abv, this Belgian Tripel is not to be taken lightly. It is brewed with German malts and invert sugars, however, so there is a sweetness to it that called to us: “Stichelton…Stichelton…” it called. We obliged. This raw milk Stilton from Nottinghamshire, England is equally bold, with earthy, near dirty notes and a lot of bluing. But of all its characteristics, the its saltiness is what really sold us on this pairing. The contrast of the salt and the sweetness of the beer really tied everything together and quenched our appetite.