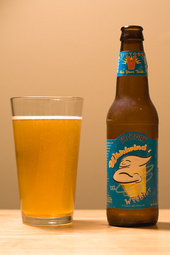 Wednesday night we were happy to have Victory Brewing join us for a second time. Pete was good enough to volunteer his time and pour some outrageously good beer, and we came up with some pretty rocking pairings. Lets get to it!

Whirlwind Witbier with Andante Dairy Largo: Whirlwind is made with an imported Belgian yeast that provides great vibrancy and flavor. It is spicy, sweet and hearty all at once, without overwhelming the palate, a unique combination. We bypassed the expected fresh and tangy goat cheese for a true gem: Andante Dairy’s Largo. Largo is a small-batch, small-format triple cream made by Soyoung Scanlan in San Francisco. As the curds set, a small amount of creme fraiche, also made by Soyoung, is added, giving the finished product a delightfully tart and bright finish. Together, the beer and cheese were perky and attention-grabbing, a great way to start a pairing.

Helios Ale with Red Cat: Helios is a bottle-conditioned Saison Style that is earthy, peppery and yet bright and lemony. Its substantial strength forced us to go with something beefy and washed-rind, and the Red Cat was just impossible to resist. Made by Sue Miller in Birchrunville, PA, it has a formidable backbone despite its soft, pudgy texture. The perfect balance of delicate undertones and overall strength, it could stand up to Helios’ 7.5% abv and still play nicely with the pepper and lemon notes.

Golden Monkey with Strathdon Blue: One of the most beloved beers in the Victory line, Golden Monkey is fruity, herbaceous and has a tremendous, rich viscosity, which led us to believe that, like Sauternes, it would pair with a slightly salty blue. We picked Strathdon because it is made right on the coast of northeastern Scotland, and as it ages the salty North Sea breeze envelops it and enriches its flavor. The sea salt is complimented by notes of grasses and oysters, giving a great overall impression of the coast. The sweetness of the beer and saltiness of Strathdon matched perfectly, just like Roquefort and Sauternes.